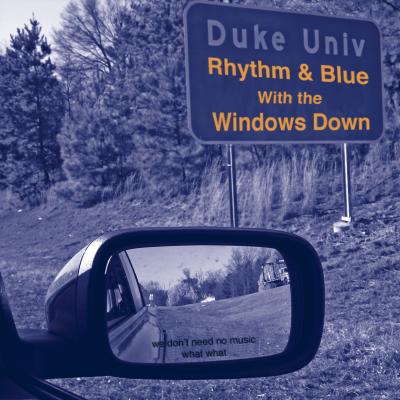 "Mixed bag" would be the best way for me to describe the sixth recording from Duke University's Rhythm & Blue, entitled With the Windows Down.

Certainly my expectations were high, what with an experienced group (co-founded by RARB's own Rebecca Christie no less), from the a cappella power nexus that is North Carolina, a track list that looked most appealing, and studio work by Dave Sperandio. Given that pedigree, then, "mixed bag" is really something of a disappointment.

All of the "polish" that I've come to expect from a diovoce album is there in spades, but in too many instances the substance itself has too many flaws for Dave to save and, indeed, even Dave's studio decisions feel a bit suspect at times.

Most inexcusably, issues of tuning, blend, and poor voicing abound. The back-to-back tracks of The Remedy and Light in Your Eyes are particularly egregious, with the chord choices and/or the voicings and/or the tuning in the background blocks sounding downright wrong in a number of places and sharp or flat in others. Also, though Rhythm & Blue is to be applauded for attempting original material — Shalisha Francis' How Many Times — and while Ms. Francis' solo is lovely, what amounts to a relatively simple melody is desperately in need of an arrangement that isn't constantly fighting it by trying to be more harmonically complex than it need be and is periodically out of tune as a result.

On that note, arrangements are OK but never stellar, and the attempts at dance tracks like I Will Love Again and Toxic not unsurprisingly yield arrangements that grow quite boring beyond the establishment of the initial groove.

Soloists always have a nice energy, though it's unfortunate that Rebecca Haber's brassy and engaging mid-range belt does not extend to her upper register and her two solos on the aforementioned dance tracks fall just short as a result. Ditto for Kristen Grillo on Redneck Woman whose "Let me get a big hell yeah..." feels just a little under-pitch each time thru the song, though she more than makes up for it on the closing track with a solo on Over the Rainbow that might get some CARA attention in the vocal jazz category.

The fault for all of the above, of course, ultimately lies with the arrangers and performers, but I couldn't help being surprised that so many of these flaws survived post-production so noticeably with Dave at the helm. In addition — and in particular on the opening few tracks — the balance between the various performers was quite bothersome, at times almost sounding like the bass and soloist were standing in the doorway of the room with the listener, while everyone else was performing around the corner in the doorway of the next room. For example, the opener, Such Great Heights, clearly has a lot going on in the background block but I'll be damned if I could make out much of it.

The CD is not without its plusses — the single biggest one being Mr. Brightside which was selected for Voices Only 2006. It's not flawless, but the balance is better between the voices, the arrangement develops a bit into the second chorus (something absent on many other tracks), the solo has great energy and overall, it's a fun and popular song of the moment. Redneck Woman is also a highlight, with its echoes of the Beach Boys in the verse arrangement and some nice arpeggios leading into the choruses, though a little-too-folksy arrangement prevents the track from getting as fun and reckless as I hoped it would.

Rhythm & Blue definitely has all of the raw ingredients but with this effort, I am sadly underwhelmed. But with a little tightening, I remain cautiously optimistic that I might actually want to listen to their next album with the windows down.

Rhythm & Blue, a mixed group from Duke University, offers a mixed bag with their latest release With the Windows Down. While the album starts off strong, the effort flags about halfway through the track list.

The album opening is excellent. Right from the first listen I was impressed. Arrangements are decent and well performed. One of the better habits of the group is its crisp, energetic, and never lazy articulations — it illustrates their energy and pushes the album forward. There's a great sense of musicality. Tuning and blend is great, and mixing and production are really top notch — truly enhancing and not covering over the voices. I liked the song choices as well, which were fresh to my ears and I think well suited to a cappella. Such Great Heights is an awesome duet and great opener, and the soloists trade off each other with aplomb. Overall I was most impressed by the high quality of the soloists. How Many Times and especially I Will Love Again showcase some incredible solo talent.

Then came The Remedy. I can appreciate the group's effort at snazzing up the arrangement considering the number of times this song has been covered, but the arrangement just doesn't work for the song, and it's too challenging for the group. Tuning especially is atrocious. From here on out the soloists are generally downhill. Catchy tunes like Redneck Woman and Toxic are cute, but the arrangements are too simple to generate much interest. The album's low point is The Scientist, which is so slow it seems to go on forever and offers nothing interesting (and poor tuning).

At least the group ends on a high note with a surprisingly satisfying rendition of Over the Rainbow. While the tuning is occasionally suspect, the group offers an excellent interpretation, both the group and the soloist.

The fact that the album was recorded over a two year period may have something to say about the mixed results. I hope in the future the group can capture 40 minutes of their A material; that result would be a real pleasure to listen to. Until then, there's really nothing to set this album apart.

With songs fostering mass listener appeal led by capable soloists, and a solid production foundation, Rhythm & Blue's latest release is definitely an album you'll want for your collection. It really is the perfect choice for those warm days, when you just want to drive with the windows down.

The album has a stunning opener. Even though I'm reviewing With the Windows Down in June, I'm confident Such Great Heights will be my favorite track from a mixed group this year. It's already one of my favorite tracks from a mixed group ever. The arrangement is incredible, the lyrics from the Postal Service are amazing, the mixing is perfect, and Rhythm & Blue's decision to turn the track into a beautiful duet was very wise. With the Windows Down continues with a song near and dear to me — Up the Ladder by the Supremes (as performed by the Nylons). In junior high, I decided I wanted to be an a cappella performer after hearing The St. Olaf Limestones' recording of this song. Rhythm & Blue's rendition didn't disappoint, and if it were junior high all over again, I'm sure my a cappella fate would still be sealed.

With the Windows Down didn't maintain a cappella dominance after its powerful opening, but a new positive was brought to light; with a few exceptions, the soloists in Rhythm & Blue can really hit it out of the park. Highlights in this section include sultry Shalisha Frances on her original, How Many Times, and Mickey Goetz, who employs a perfect pop voice on Mr. Brightside. The album picked up with Mr. Brightside to offer three gems in a row. If the intonation and blend on The Remedy had been tighter, it could have given Such Great Heights a run for its money. Soloist Simon Dixon is impassioned yet controlled on The Remedy, and the funky twists sprinkled throughout Jason Mraz's song are refreshing and exciting. And again, if the intonation and blend hadn't been so slippery in Light in Your Eyes, powerful soloist Jenna Olson could have caused a downpour of tears. Still, a few tears popped out all the same.

The end of With the Windows Down offered a potpourri of genres. I don't dig twang, but I was happy to hear Kristin Grillo is at least capable of singing country on Redneck Woman. I rarely hear a cappella country succeed, and the track certainly isn't a standout, but you know? It's not bad. I enjoyed AVP's version of The Scientist more than the Rhythm & Blue version because of the dramatic emotional intensity AVP achieved, but the Rhythm & Blue version is still beautiful and memorable. Again, the right soloist was chosen for the job, and I have no doubt Xander Chen will give you a few goose bumps.

I really enjoy With the Windows Down. It's one of those rare solid albums where you don't fast-forward over tracks, all the soloists deliver emotive performances, and you happily sing along with the group again and again.