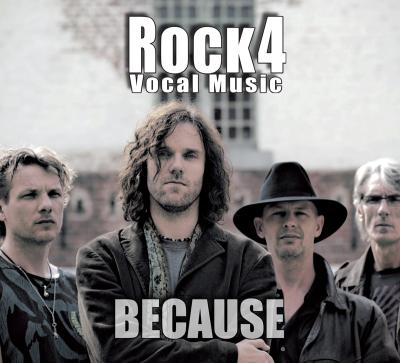 Haunting, listless, sparse and introspective, the Dutch masters of Rock4 combine elements of classic, artsy rock with a rounded tone reminiscent of the King's Singers. Rock4 doesn't cover songs as much as display their bones. This is an album of beautiful skeletons. But Rock4's minimalism in combination with the group's mellow, introspective song choices won't please all listeners. You won't find a wall of sound on Because. You won't find yourself dancing to these tracks. RARB readers are accustomed to a kind of musical realism. Rock4 is interpretive. Splatters on a white canvas. This is an album for those who can embrace that unease.

The purity of Rock4's countertenor is one of the most pleasing I have ever heard. That the group can transition from this to a hair-raising scream attests to the intensity of this quartet. Mama and Uninvited are masterful. Be my sculpture is a delight of discomfort. Because and Breathe ache with loss.

But despite this reviewer's praise for Because, Crazy English Summer, even with its live production values, is the better release. The passions of this earlier album are untamed, even frightening at times. There's no net. Because has many moments of great beauty, but some small sense of urgency, some rawness, some danger failed to survive the recording process. Without this, some unnamed energy stays in the head when it should move to the heart.

In a world of wine-cooler releases, Because is 91-point Merlot. Because should be savored, not gulped. If you approach it casually, Because is meaningless. This is an abyss that must be stared down.

Perhaps it's apropos for Rock4 to name its latest release Because, as it so often had me scratching my head and asking "why??"

Mind you, after Crazy English Summer in 2005, I was very much looking forward to hearing this Dutch quartet again. But alas, so much of what I enjoyed seven years ago is entirely absent from this album, which flirts dangerously with being monotonous and downright boring.

A generous analysis might offer that Rock4 was purposely taking a minimalistic approach, but if that's the case, the group has stripped everything a little too close to the bone. Breathe and Because are barely arranged at all, and while the resulting sparseness of the sound is haunting for a little while, the lack of any development whatsoever renders them rather lifeless past the first thirty seconds or so. Into temptation and Mad world offer at least some semblance of establishing background voices, but we're talking the simplest of the simple here. A couple of songs fair slightly better simply for their length and variation in melody lines — Comptine d’un autre été: L’après-midi and Private investigations most specifically — but the former is entirely instrumental and the latter's original version relies heavily on expressive guitar playing, and in neither version by Rock4 do we hear anything resembling that emotion and texture. Indeed, even beyond the arrangements, an overly formal and straightforward approach to the performance of the music itself is another major negative here. I realize that English is not the group's first language, but so stilted is the delivery of Viva la vida and so un-nuanced is the solo in Mad world that its just inexcusable.

All of this is so much more disappointing because Crazy English Summer made a real effort to reinvent a number of well-known songs. Here, the closest Rock4 comes to reinvention is the final song Uninvited, which on its own merit is an interesting approach to an overdone song. Unfortunately, on the heels of some of the droning, uninspired arrangements that precede it, Uninvited just seems like more of the same rather than anything fresh and new.

With all of this said, there's no question that the Rock4 gents can sing, and I could listen to Luc Devens wail anytime he chooses to do so. If the group can restore some of the energy and inventiveness that I remember from years gone by, I'll be as excited to hear the next release as I was disappointed in listening to this one.

Rock4 is a Dutch quartet with a distinct, interesting style. The group has a clear idea of how it wants to sound and what it wants Because to achieve, and while the execution is a bit uneven, overall Rock4 is successful.

Because has a very mellow vibe, backed by clean production and tight harmonies. On tracks with a more classic sound, the natural production and simple structure serve to really showcase the group's strong vocal talents. However, with only four singers, the group can sound thin. This is particularly noticeable on the pop songs, which require some complexity to keep the listener's interest past the first verse and chorus.

First the good stuff. Album highlights include the rich harmonies and folksy reinterpretation of Pink Floyd's Breathe, the sultry atmosphere of the original tune Be my sculpture, and the Luc Devan's wonderful, powerful solo on Uninvited. But the best song on the album, for me, is the wildly improbable, darkly simmering Private investigations. There are so many disparate elements in this song, none of which should go together in theory: crystalline "ooo"s in the block, a spoken (not sung) solo reminiscent of Tom Waits, a jam band breakdown, all capped off with several gravelly cries. Rock4 pulls it all off, mostly through treating the song like a serious, noir-esque production, not a gimmick. It's always great to hear unusual songs done well, and Private investigations fits the bill nicely.

While the album shines in thoughtful covers of classic rock songs, the low points of the album are the well-known and frequently-performed a cappella standards. Because is a well-sung transcription of the Lennon/McCartney/Harrison harmonies, but nothing more. Mad world is clunky and limp, with a bored sounding soloist plodding through the entire song. The worst offender is Viva la vida: there's nothing innovative about the arrangement, and the background vocals lack energy or intensity. If a group is going to record a song that's as prolific in the a cappella community as Viva la vida, they've got to bring something new to the table.

Despite these missteps, Because comes out ahead in the end, saved mainly by Rock4's unique style, Devan's powerful solos, and some great creative song choices. Next time, I hope Rock4 ditches the college radio hits and focuses more on thoughtful arrangements of classic rock's hidden gems; Rock4 really doesn't need the filler.

To order this album, visit the group's web site, online store, or the iTunes Store.