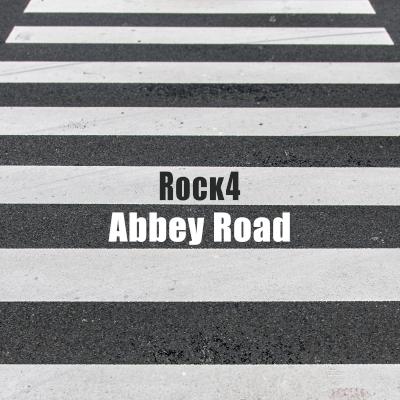 For this review to make sense, you should know that I am mostly a category two person with a splash of category three, enough so that I didn't immediately realize this is a track-for-track cover of The Beatles' last four-man studio album. And I didn't really have time to catch up to the rest of the classic rock world by learning the original record inside and out, so you'll have to take my face value impressions at face value.

The opening track, Come Together, is a contender for world's best rock song, is definitely my favorite Beatles song, and is also the one track that gets an obviously less-than-conventional cover. Rock4 chose to transform it into an Enigma-style mashup with techno Gregorian chant. This was a mistake. I, personally, am exactly the target audience for a cappella techno-fied Gregorian chant. I do not want it mixed in with The Beatles. Nor do I want one of the few Beatles songs I actively like to be anything other than the rocker it is.

Further down the road (heh) things seem to straighten out, at least as much as The Beatles intended. Something is straight up and very nice for what it is. Because, an a cappella staple going back to The Nylons, does what it says on the tin and the two Sun songs are arranged with pleasing echos. Octopus's Garden, in addition to being a terrible song, is also the weirdest listen because of the way Rock4 sings the word "garden". It's just a smidge too Germanic (sorry, I know you're Dutch but there it is) to get past my ears. Otherwise, the English is just as good as the singing, which is to say really quite nice overall.

Moving on, I really like the unisons on Carry That Weight. Probably my favorite song on this disc, and one of the most charismatic. I also enjoy the duo of Mean Mr. Mustard and Polythene Pam — Rock4 keeps it light and gives the latter a heavy dose of Sympathy For the Devil-style "whoo-whoo"s. I am not going to wade into The Beatles vs. Stones abyss, but a few things stand out too much to avoid.

All this is to say that Abbey Road is an ambitious project that makes good on its promise. If that appeals to you, you'll have a good time.

It's The Beatles' Abbey Road. Cover to cover. But in the hands of Rock4, it's both more and less than what you might expect. As we've said before, Rock4 doesn't just cover songs so much as displays its bones. At the songs' best, these bones rock harder than the originals, with just enough killer lead, precision singing, rock-solid bass, and subtle twists to keep us on the edge of our seats. At their worst, they're still well-sung, though simplistic covers. Abbey Road is a path that leads more to Rock4 than The Beatles, but that just means it's another gem in the group's 13+ year tradition of delivering a signature sound of artsy, sparse arrangements, and unforgettable classic rock leads.

The recording studio offers ample opportunity for layering track upon track (something The Beatles were quite famous for), but, given that temptation, this Dutch quartet keeps pretty close to honest behind the mixing board: tastefully light on the effects (for contemporary a cappella), and lighter still on the "mults" (the thickening of the sound by singing the same part two or three times). Vocal percussion, bass, lead, and two harmonies comprise the dominant formula, and sometimes it's less. Though listeners will hear light flange to give the voices an occasional organ-like quality, and a sprinkling of reverb for space, they won't hear the standard wall of sound (especially heavy multing, compression, octavizing and sampled vocal percussion) that has become nearly inseparable from contemporary a cappella. In fact, there's little about this album that couldn't have been produced twenty years ago. Don't let any of that throw you: Rock4's approach exposes its raw talents. And, when your bass, leads, and overall blend are this strong, you want to show them off, not cover them up.

Enjoying Rock4 fully requires joining this group in its often sparse and intensely dramatic world. Two tips for the journey: 1) Crank it on a really good sound system. 2) Don't distract yourself by doing anything else. This album doesn't work well as background music. Immersion is your best bet. Get drawn into the nuances, surrounded by the details, and lost in the simple, effective choices. Abbey Road isn't your workout mix — it's your afternoon activity.

This isn't to say that Rock4 is above critique. Some tracks lack the full dynamic expression that would have earned them a higher ranking — a realm of musicality that takes on even more importance under Rock4's exposed arranging and production rubric. Some tracks deliver stunning leads, but the backs don't quite bring the fire. And some of the arrangements just get the job done without wowing the listener.

Oh Darling! is a prime example of both Rock4's strengths and weaknesses. Luc Devens's Zepplin-esque take on the lead is outrageous, filling imaginary stadiums and demanding repeated listens. The arrangement, however, doesn't quite track the emotional intensity of the lead. It's fine. The chords are there. The syllables don't distract. And of course, the voices performing the arrangement are absolutely lovely here, as they are on every track. But while less can be more, sometimes more is the more that's needed. And that tension between The Beatles' bombastic production and Rock4's minimalism is the album's puzzle.

One last critique. The classical-song-leading-into-the-pop-song has been a popular arrangement tool for a while now, with groups from MIX to CONNECT to The Capital Hearings employing it to successful effect. Like mash-ups generally, it's best when the juxtaposition resonates with the listener, adding unexpected meaning and reframing the experience of the song. Come Together, the album's opening track, utilizes this technique, but the aha moment never comes; and more frustratingly, the choice muddies the concept of covering an entire album. Every recording has little missteps; it's just unfortunate that Rock4's stumble is the album's first step. If the theme is to be The Beatles done as only Rock4 can do, don't lead with the variation of an extended Gregorian Chant. Theme and variation is, by nature, an ordinal list.

Recording beloved works like The Beatles' Abbey Road is a more challenging endeavor than it might at first appear. To be anything other than amateurish, the performance must always exceed the original, not merely imitate it. What makes Rock4 great is that these singers largely do just that. Their style is all their own, and whether you want to listen end-to-end or just pick out your favorites, there are plenty of exceptional tracks on this one-of-a-kind version of Abbey Road.

Of course. Rock4 is brilliant. Abbey Road is legendary. When you put the two together, of course the result is a delightful reverie in the past and present magic of recorded music.

When the singers of Rock4 entitled their album Abbey Road, they weren't kidding. This is an almost verbatim recreation of the seventeen-track masterpiece originally put forth by John, Paul, George and Ringo in 1969. Each track is sort of a vignette, with the first half comprised of standalone singles and the second half a medley of seemingly incomplete compositions. The tone ranges from whimsical to gnarly to uplifting, reflecting the tumultuousness of the human condition as much as that of The Beatles themselves. For a primer on the original Abbey Road, check out these reviews by Pitchfork and Rolling Stone.

Rock4 has a knack for manipulating space. With just four singers, this Dutch group has no problem with simplicity. Most of Come Together is just a percussionist, a bass line, and a soloist, and it is riveting to the core. Yet the group can also pack your headphones with the enveloping sound effects of I Want You (She's So Heavy) or boisterous energy of The End. Some of this can be attributed to tactful overdubbing, reverb, and filters Luc Devens applies in post-production, but much of it is simply due to the way these four singers have such distinct vocal timbres while simultaneously being able to blend so seamlessly. As with Don't break the rhythm released two years ago, Rock4 demonstrates how arrangements and the recording studio are just as important as lyrics and melody for crafting a mood.

Once the unbridled nostalgic bliss wears off, there is the unfortunate reality that this Abbey Road is not as awesome as it could be. For the most part, Rock4 transcribes instruments to syllables. While there is an art to remaining faithful to the original, often the arrangement could be more impactful with a choral motif in lieu of extraneous background instrumental riffs. Something is a beautiful ballad that begs you to get lost in the emotions of the soloist, but each rhythmic "doo" is like a pinch jolting you out of the dream. Octopus's Garden is a fantastically playful piece, but even with kazoos and bubbles it just sounds so melancholy when Rock4 sings guitar parts on the rest of the track. These are two of the more prominent examples, but the arranging, in general, is less innovative than such an ambitious project deserves.

I should disclose that, to me, The Beatles are a milestone in musical history. What started as a heartthrob quartet, specializing in only the most simple of earwormy pop tunes, evolved into a team of psychedelic scientists fixated on infusing new technology, global experience, and emotional authenticity into this thing called "music". In the span of a decade, The Beatles reimagined what was possible in the recording studio, and they were able to cover so much ground while still basking in the limelight. As an a cappella group that also pushes the envelope of sonic sensibilities, it is only fitting for Rock4 to add this tribute album to its discography. The original Abbey Road is the culmination of years of experimentation, and if you have an affinity for it then you are sure to enjoy this interpretation by Rock4. If you are not a Beatles fan, this is as good an excuse as any to jump on the bandwagon.