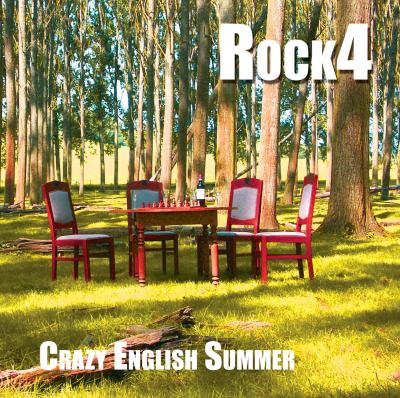 Rock4 is a group without a trace of, or call for, the ubiquitous R&B influence which has dominated popular music for over a decade. Amazingly, sans dedicated VP or even a fifth voice, this quartet delivers a full-on stadium rock sound with an exciting sense of theatricality.

Even Rock4's production shows respect for the "less is more" mantra. In the seemingly endless ocean of overdubbed, over-produced multi-tracked projects, Rock4's Crazy English Summer stands apart as that rare release with enough slickness to be repeat-listenable and yet still plenty raw enough to please even purists. Perhaps a few effects were a little heavy-handed for my relatively clean tastes, but surely some listeners wouldn't even notice this live record's effects choices.

When performing rock, remember: leads, leads, leads. And Rock4 has this lesson down pat. Soaring tenors and artistic arrangements that favor their strengths do justice to Queen, Sting, Phil Collins, Zeppelin, and even a stunning Uninvited by Alanis Morrissette.

Rock4 shares some similarities with the mid-'90s versions of groups like Acme Vocals and Blind Man's Bluff but with a more theatrical flair. This European a cappella rock quartet is ready for their well-deserved American fan base.

In all honesty, I'm really not quite sure what to make of the Dutch group Rock4's album Crazy English Summer. It feels wrong to think so highly of a group's singing, blend, production and creativity and yet to not care for their album all that much. But that's just about how I feel.

For those who lament the overabundance of carbon copy covers out there, Rock4 is a welcome breath of fresh air. More often than not, their versions of songs are from a rock repertoire that shades towards the hard core — Led Zeppelin, Queen, The Police, Radiohead — bringing a fresh sensibility to the material that will surprise you. Ever thought of Roxanne as a slow, soulful, ballad? Or Every Little Thing She Does Is Magic with a Latin feel? Well me neither. Definitely intriguing. Whether you like it, is another story.

Picture, if you will, a quartet that has a King's Singers quality to its sound but is unquestionably hipper and cooler, yet not quite as hip and cool as The House Jacks or m-pact — and that's the space that Rock4 occupies for me.

Perhaps that's why the thought that kept running through my mind most often in listening to this album was, "Dagnabbit, why don't these guys have a full-time VP person?". I'm not saying that every four person group needs a VPist to be good, but if you're going to go without one, the arrangements really need to make up for it. And theirs don't. But find the Dutch equivalent of Wes, or Jeff Thacher, or Stack, hook him up with these guys, and they could truly be a force to be reckoned with.

Now in all fairness, there are already a few flashes of brilliance when you do get a chance to hear what this group can do when arrangement, interpretation and performance all come together (the CARA-winning Uninvited is a good example: unusual interpretation, killer solo, spare but nevertheless engaging arrangement). But unfortunately, much of the rest of the album features merely serviceable arrangements backing kick-ass solos. No surprise that Luc Devens has starred in JCS (wish I had seen it or heard it). Just one word for him and Peter Weltens and that is "omigod-wow-holy-cow-un-friggin-believable". Devens sings the Freddie Mercury material, and he is a dead ringer, no pun intended (Ben Elton and the producers of "We Will Rock You", take notice). Mind-bogglingly good. And Weltens has notes that would make Steve Perry and Dennis DeYoung bow their heads in shame, coupled with a growl that makes the hair stand up on the back of your neck. To call these guys tenors is an understatement and their contributions were unquestionably the brightest moments in my listening experience.

But overall, this album is disappointingly unsatisfying. I want to listen to it again, but I won't. It's frustrating because these guys are immensely talented, and they really bring an interesting ear to old and/or unusual material. Maybe if they went the baSix route and collaborated with Deke, Britt Quentin, and Bill Hare on their next album... now THAT would be exciting. Well, a guy can dream...

Though 2005 is quite young, I'm going to go out on a limb and say that Rock 4's Crazy English Summer will be the strangest album I review all year. While I grew to like it over repeated listens, it is definitely not an easy disc to take in.

Glancing at the disc's packaging, one might wonder what's so strange about it. "Four Dutch guys singing classic-rock covers? That sort of thing is huge in Europe!" Then one hears the opening strains of the title track, and more specifically the voice of lead singer Luc Devens. An immensely talented if somewhat undisciplined countertenor, his sound can only be described as Freddie Mercury on crystal meth. He brings an almost overwhelming energy and sense of drama to Rock4's covers of classic songs. The songs are often further filtered through highly creative and transformative arrangements. The other three guys in the group are almost afterthoughts; I've never encountered an a cappella group with such a clear division between frontman and backup singers.

That's not to impugn their talent. Crazy English Summer was recorded entirely live in concert with what sounds like minimal post-production, and for a live album it is extremely tight. Tuning, blend, and rhythm falter only very rarely. No doubt, these guys have mastered their basics.

As for their experiments, well, some work and some don't. Their cover of Paranoid Android imbues the Radiohead masterpiece with a King's Singers-esque elegance that acts as a surprisingly good foil for Devens' over-the-top lead vocals, on which he actually manages to sound like a paranoid android, more so than Thom Yorke did. The song's harder-rocking sections suffer a bit for the group's small size, but on the whole, this track is a success. Similarly, the Police's Roxanne works quite well as a slow, eerie ballad.

The other Police song, Every Little Thing She Does Is Magic, doesn't survive the transition to a downtempo bossa nova. And I'm not buying Led Zeppelin's Whole Lotta Love as a swing number either, especially with an exact replica of Robert Plant's song-closing scream incongruously tacked on at the end.

And despite bringing a Mercury-like energy to Alanis Morissette and Fleetwood Mac, when Devens actually covers his putative idol on Killer Queen, he and the group become timid and listless, as though they were intimidated by the music of the master. According to the group's website, their next project is a song-by-song cover of "A Night at the Opera"; I hope they can overcome their apparent fear of singing Queen, or that project won't be a success.

Though it falls flat as often as not, and though I don't really totally understand it, I have tremendous respect for what the group is trying to do on Crazy English Summer. A genre so filled with mimicry as today's a cappella is (not that mimicry is not in itself an art form) could always use the reminder that it's possible to put a creative, individual, and cohesive spin on cover songs. I'd encourage Devens to tone it down a little so his moments of highest drama stand out instead of being constant and exhausting to the listener. I'd encourage the other three members of the group to step into the spotlight once in a while. And I'd encourage them not to experiment for the sake of experimentation, but only if it's actually going to work. But I appreciate Rock 4's approach to their craft and look forward to tracking their future growth.

Should you buy the album? I don't know. It's a highly respectable achievement, to be sure, but also very much an acquired taste. I've attempted to describe it as best I can; if what I've described sounds like your bag, then go for it. If not, then you should probably save your money for something else.