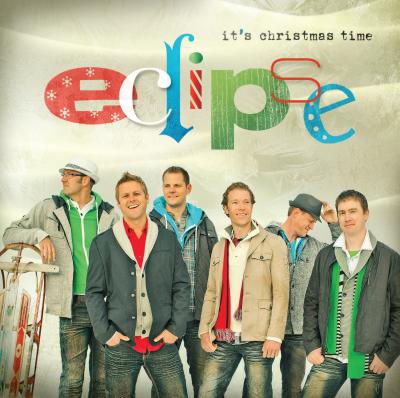 The men of Eclipse have always known how to construct an enjoyable recording. Their live album For Show is still one of my favorite performances ever digitized. They continue in this fine tradition of stellar musicianship even though they have abandoned the numerical naming convention that I adored in the past with the release of their second Christmas album It's Christmas Time. For those of you not intimately familiar with their discography it goes something like this: Once, Think Twice, Three Kings and For Show. Then, inexplicably, the next album was Grateful Praise and I cried a little on the inside.

So while not necessarily a must-have given the total oeuvre of holiday music that's been recorded, It's Christmas Time is a great addition to a contemporary a cappella six-disc rotation or holiday party mix playlist. Some of the songs are truly standouts, while others hold up to very hard scrutiny but aren't magical. Even this bah humbugger found himself bobbing his head along with several tracks against his will. And most people will be in perpetual grin mode listening to this album.

The disc opens with a fairly standard I Saw Three Ships. I can't help but make a direct comparison to the sublime rendition offered by Sonos last year on December Songs. Eclipse's version feels a little too pop-jangly for my taste, as it comes across as a fairly straightforward cover of the song. These guys have too much talent amidst the group members to simply rest on their laurels like that.

Funnily enough, the pop-jangly sensation is exactly their sweet spot. It totally encapsulates the essence of a group as squeaky clean as they are. As well, the group is adept at sparkling jazz. You know how jazz is more accessible and sounds easier to perform than it really is. Let It Snow is a fun-spirited track that captures the frolicking nature of a kid expectant of his or her first snow day of the year.

They really hit the pocket on the two tracks that are gloriously saccharine-laced. I love them so much. Come All Ye Faithful is ridiculously good. The slightly pop/reggae-infused background with its syncopated rhythms, internal rap and thumping bass began the head bobbing. It brought to mind another of their world-music-inspired tracks Joy to the World. That flows directly into the groovable Shake Up Christmas. I mean, really, what else does that title make you wanna do? I'd Dougie to it. And even though the rap section made me cackle loudly as my Starbucks barista gave me the side eye, Need a Little Christmas got me moving. I love music that causes spontaneous outbursts of whatever flavor. That means it had an effect on the listener, and who wants to make milquetoasty music that's always safe and instantly forgettable.

Where they aren't as successful (splitting hairs) are the ballads, which is actually the fault of the sound and production rather than anything the performers are doing. The whole disc has been engineered to be bright and buzzy. A listener can hear the snap, crackle, pop of every note, background phrase and lyrical line. This same incessant cheeriness becomes very distracting and homophonic after a few tracks.

The brightness also makes the tempos seemed rushed on what I would consider ballads. For example, Do You Hear What I Hear? loses a lot of its earnestness and emotional honesty because the song trots along at a high clip before you can appreciate the wonder of it all.

And this homophonic quality of sound really set the mood for my displeasure with the overall recording. The Eclipse guys are masterful at drawing a listener into their sound, both in live performances and on previous recordings. Here, I was left feeling very cold and distant. It was a very odd emotional response to a group that I've loved for almost 10 years.

Since it is the holiday season, buy or download several copies of the disc to give as gifts to your friends and family that need a quick picker upper during this time of the year. The album really is like getting a vitamin B shot once a week. You cannot not be happy listening to it.

It's Christmas Time might be the most club-friendly a cappella Christmas album of all time. This review, it occurs to me, might in fact be the first time anyone has even used "club-friendly", "a cappella" and "Christmas album" in the same sentence! It's an unusual mix to be sure, but the men of Eclipse pull it off well thanks to some smart arranging, bumpin' beats, and a whole heap of energy.

The last time I heard this group (three years ago, on Grateful Praise), I noted that the album's production at times impeded its reverent tone. That album's slick polish felt sometimes at odds with the humanity of the group's message. The solution? Add some sick drums and have more fun! Everything still sounds pretty darn tuned and radio-ready, but this time around the general aesthetic of the album is a much better match for the production!

My favorite track? It's gotta be Shake Up Christmas (a title which pretty much sums up this album in a nutshell). The beat is just so tight, and the party vibe so infectious, you can't help but sing and bounce along. It also might be the best use of "Ho Ho Ho" arranged into a hook ever.

Speaking of cool arranging stuff, I loved the pleasant unpredictability of I Saw Three Ships (just try to guess where bVII is resolving next!). I also love the tight, slightly gospel infused harmony of O Holy Night (which suffers a bit from its hyper-polished state, but I'll let it slide because it's the exception on the album and not the rule). The percussion throughout this album is stellar as well — perfectly groovy and supportive, yet always clearly vocal. It's no small thing to make truly vocal percussion sound appropriate, and to sustain it this well for a whole album is worthy of praise indeed.

Who is this album for? Probably not you, Mr./Mrs. Loves-traditional-Christmas-music-and-untouched-vocal-harmony. On the other hand, if you're looking for something to shake up Christmas (See? It's perfect!), this album is a real treat — a fun and rocking disc that puts the emphasis on the joy of the holidays.

It's Christmas Time is a slick new album from the six-member, all-male vocal group, Eclipse. The music on the album is very well done, but the modern pop arrangements may be off-putting to those expecting something more traditional based on the familiar-sounding carol names. With driving beats on nearly every song and heavily produced vocals, much of the album has a boy band feel to it. Although at times things seemed too "pop-y" for my own taste, I did appreciate the sense of energy and urgency the group brings to its music.

In some sense It's Christmas Time is a tale of two albums, interleaved with each other. The first album is the six traditional carols. As mentioned above, even these are done with modern pop arrangements. One of my favorite ones is Do You Hear What I Hear. It is very rhythmic from the outset, with a grooving vocal percussion beat and syncopated bass hits. Eclipse does a good job at putting its own stamp on the songs, for example by adding a "Let us sing our praises" refrain at the end of I Saw Three Ships, and a 20-second introductory phrase (all "ah"s) for Let It Snow. However, these moments don't all work out well — there's a 40-second spoken part in the middle of Let It Snow (with repetitive chords underneath it) which just seems kind of odd.

Of the newer songs, Christmastime was my personal favorite. Melody and lyrics combine nicely to bring home the central message of the album: "It's the hope that one day the world will know peace, it's the love that you feel helping others in need, it's shepherds who follow the star in the night, all wrapped up in the gift of Christmastime... It's the sound of heaven as angels sing, it's the grace that only the Savior will bring, it's wise men who follow him each day of their lives, all wrapped up in the gift of Christmastime!" That exuberance for the holiness of the holiday is really the best part of the album, for me.

The biggest offense of the album is the overwhelming use of auto-tuning with no care for the musical artifacts it leaves behind. As I listened to the album for the second and third times, I counted no fewer than nine spots where the auto-tuning made me cringe. Generally it was on the soloist's voice. As near as I can tell, this is not auto-tuning done for deliberate effect, but rather the remnants of auto-tuning done to get the singers in tune. I was left feeling as if when recording the album the group didn't even care whether or not they were singing in tune because they knew they could just fix things later! That is the dominant reason I marked Sound/production as just "average", even though in all other respects the production warrants a "4" or "5". It's also the reason Repeat listenability fell to a "4" when most of the songs individually warranted "5"s.

To sum up then, if you are in the market for a Christmas album and you can overlook some auto-tuning artifacts, It's Christmas Time has a lot of things to offer — not the least its energy and excitement for the holiday.

To order this album, visit the iTunes store, Amazon.com or the group's website.