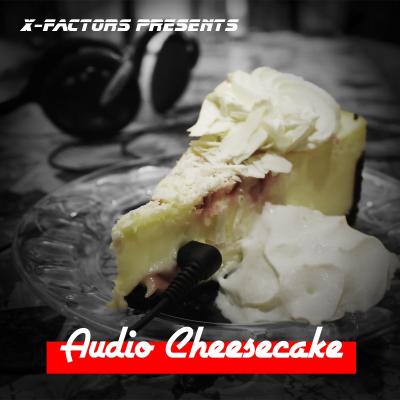 Audio Cheesecake is all formula. What do you get when you take decent singers, have them tracked by a producer with a cappella experience, and have the whole thing mixed by one of the big name aca production houses? As it turns out, you get something very similar to every other group that follows the same path (which is more and more groups every year). In short, X-Factors hits a lot of right notes, but the whole thing feels so safe and so calculated that there's no real sense of depth, emotion, or ultimately, artistry. It's a cappella by the numbers.

Having said that, there's a reason why the aforementioned formula is gaining traction on the collegiate scene. The result is certainly an improvement over the typical yearbook album, and I would be remiss if I didn't mention some of the spots that elevate Audio Cheesecake above the level of average. There are subtle hints at creativity throughout that belie a traditional collegiate approach, and they happen frequently enough that I see a pattern of intent to appreciate.

Hometown Glory offers up a supportive halftime beat throughout which, whether it's your cup of tea or not, changes the feel of the tune enough to make it distinct. Fields of Gold has a nice choral moment about 2/3 of the way in that changes the texture enough to recycle my focus. Say a Little Prayer gets a modern pop update, which plays well to the group's strength as earnest, peppy singers. These are all nice touches that elevate the music at least a little above the typical.

The problem, I feel, is that while the production has somewhat loftier goals, the singers are content with technical correctness. This album is just so flat in terms of emotional dynamics that it may as well have been robots singing. Shiny, happy, in-tune robots, but robots nonetheless.

I have to point the finger at both backgrounds and soloists. Backs first — everyone (upper/middle-voice women in particular) sounds like they're trying so hard to sing everything just right that I don't hear any inkling of nuance in their tone. The intro to Hometown Glory is a prime example. The static "ooh wahs" give me nothing emotionally — I have no idea what the mood of the song is supposed to be, or why I should care about the people singing it.

This vanilla background singing would be easier to get past if the soloists really stole the show. Sadly, everyone sounds really karaoke; content to just hit the notes with little or no sense of context for what they're singing about. This is the way you deliver a song when you're out having fun with your friends, not when you're trying to create a lasting, meaningful snapshot of your music.

Perhaps that's just it; maybe all this album was intended to be was a record of people having fun singing together. After all, isn't that the heart of what we do? Still, as someone not in the circle of friends, I want more! Shed some tears when you sing, smile, make faces, and move around! Use extreme (but tasteful) studio dynamics — make me feel something. This kind of squeaky clean singing may be alright for your friends and fans, but for the rest of us, "good" isn't good enough anymore.

Audio Cheesecake is one of those albums that unfortunately leaves me wondering, "What if?". What if X-Factors could consistently deliver on its promise of high energy a cappella goodness with kick-butt soloists? This album would get an easy "must get" recommendation from me. But unfortunately the group can only deliver about half the time; half of the songs contain some glaring mistakes which weren't ameliorated by the many things X-Factors does right.

X-Factors is a fifteen-person mixed group with both male and female soloists. These singers doesn't suffer from any of the obvious flaws that can sometimes affect amateur groups: they sing nicely in tune, they pick interesting songs, the soloists are all pretty good and well capable of singing the songs' ranges. In fact, some of the soloists are truly outstanding. Worth mentioning here are Marissa Olegario in Hometown Glory, Emily Krulewitz (or perhaps Emily Jordan) in Good Girls Go Bad... Romance (a mash-up between Cobra Starship's Good Girls Go Bad and Lady Gaga's Bad Romance), and Hannah Dawe in Many the Miles. I appreciate Marissa's earthy tone quality, Emily's ability to get the words out at high speed with oomph while staying on pitch, and Hannah's subtle vibrato and smiley sound that makes it seem almost like she was sharing a joke with the listener.

At the group's best, X-Factors brings a palpable exuberance to the songs. From the very first notes of Go Your Own Way, I could tell that what was about to happen would be exciting. They attack the Fleetwood Mac classic in a no-holds-barred fashion, sucking me in by making me wonder if the singers could maintain that same energy for the entire song (they do). Good Girls Go Bad... Romance is another example, especially when it gets into the Bad Romance part of the mash-up. I felt myself wondering if they could keep Bad Romance going at the same quick tempo they had established in the first half (they could). For reference, I timed the tempo at about 133 bpm, which is more than 10% faster than the classic On the Rocks version which I timed at 120 bpm. Faster doesn't automatically mean better, but it's likely not coincidental that that was my favorite song on the album. The scattered "good girls go bad" lines woven in throughout the second half of the song were deftly done as well.

However ... the energy doesn't come without a price. The price in too many songs, is that in a misguided attempt to add energy the group has eliminated nearly all subtlety. For example, in Fields of Gold, Sting's haunting melody becomes a battle for dominance between the male soloist and mainly female background parts. Where Sting chose to have a high pitched instrument (violin?) gently echo the soloist on an alternate melody, X-Factors has chosen to feature a high soprano singing so loudly there's no mistaking the "This is my turn, now!" feeling. Very, very few songs feature any dynamic contrast at all. And with no change in dynamics comes no change in vocal timbre. Add to that a bass line that often sounds very processed, and I keep on feeling like X-Factors is shouting at me rather than politely inviting me to share in their enjoyment.

The other main failing of the album is the arranging. I'm not one who often notices the background syllabification, but in many of the songs, very unimaginative choices such as "dinh a dinh", "jimh a jimh", "dun dun dun", and "doh dun doh" stand out. And to add insult to injury, these background syllables often repeat the same chord sequences over and over — loudly, always loudly — thus detracting from the often lovely soloists. The usually uninspired bass lines don't help matters either. In Many the Miles, for example, I get so fed up with things that my favorite part of the song is when the instrumental parts drop out at 3:15, leaving just a women's trio for ten seconds. Ah, the relief! This didn't have to be, though. Hometown Glory, one of the rare songs with some subtlety, makes me perk up and say to myself, "Hmm, what's going on?" as the introduction starts. What if all the songs could have done this?

My review is a bit long, so I'll simply conclude with a profanity advisory for Hometown Glory ("s"-word), and an exhortation to X-Factors to strive a bit more for artistry and subtlety for its next effort.

I hate to sound harsh about Audio Cheesecake, an album from Northwestern's coed X-Factors, but I need to be honest: the songs sound boring, and the singers sound bored. There is not an ounce of dynamics on this album, and many of the arrangements drag.

I have the same criticism about song after song after song. The arrangement and pitch of California Dreamin' is generally good, but the monotonous arrangement drags the song down (I did enjoy the little Californication blend-in!). Fields of Gold has absolutely no movement at all; the arrangement is full of long sustained "loh" or "nah" chords that never grow or build. It's weird to describe Go Your Own Way as "sleepy" since it's such an uptempo song, but it starts and ends at the same level — every chorus sounds identical to the first, with no growth or drama (even during the extended instrumental bridge). Same thing goes for Say a Little Prayer; it's as though the singers are going through the motions, verse/chorus after verse/chorus, singing their parts the same way each time. There are soloists here who don't sound great on their songs and who — more importantly — can't overcome the challenges of the recording/arrangement to make a compelling song.

In my reviews for RARB, I generally say little about production or recording, but I need to here. I've reviewed several collegiate albums in a row that all have Ben Lieberman's name in the liner notes, and I have not yet been impressed with the sound. Audio Cheesecake is no exception. There are inexcusable production choices here: the audio quality of i2i and Come So Far in particular are especially grating. After a solid intro on Hometown Glory, the soloist comes in with her voice way too low in the mix. The backs should have been brought way down in volume — both to make the soloist actually audible (she isn't at times, and I wonder if the key is too low for her register) and to heighten the drama of the song. One could push the blame onto the group (saying that this is the group's arrangement choice), but it's definitely the role of the producer to capture an engaging performance to tape, not just to push the buttons.

There are glimmers of hope here: the transition in the medley Good Girls Go Bad... Romance is great, so kudos to Dave Thomases for that arrangement. (Regular RARB readers, you know how hard I am on medleys usually, so this is high praise!) The female soloist in the Good Girls Go Bad part (Emily Jordan, perhaps; it's not clear from the liner notes) is on fire. I love the arrangement of Because (shout-out, Eric Bell!); I love when a group has an ensemble piece without a soloist. I still wish for more dynamics here, but it is one of the stronger songs on the album.

Despite the soloist challenges, the lack of dynamics, and the often boring sound, I genuinely hear potential in this X-Factors album. Unfortunately for the group, RARB doesn't rate on potential; we rate on the actual recording. Audio Cheesecake is a disappointing album.