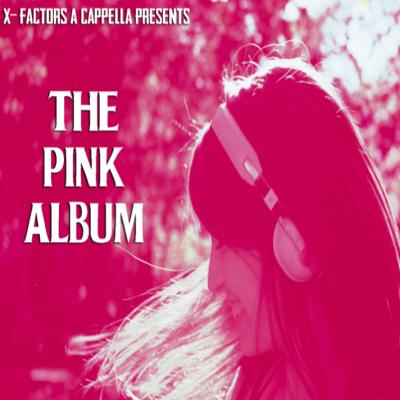 What a difference a few years can make: Northwestern's X-Factors sounds like a completely different group here on The Pink Album from the group's previous album, Audio Cheesecake. My biggest complaint about Cheesecake was and is that the group sounded bored and all the songs sounded boring, but these singers have turned it completely around here: they sound engaged, the album moves, and it's generally fun to listen to.

The pulsing Cosmic Love is a standout track here; soloist Maggie Gorman fits this song well, and the group captures dynamics, swelling and receding to fit the tone of the song. There are some solid arrangements here, too; All My Mistakes really moves, which isn't always easy for a slower, mellower song, and the execution of Crazy Ever After is gorgeous (of course, the Rescues make for inspiring source material!).

Still, X-Factors has some things that still need work. Dynamics are a huge improvement over the group's last album, but the singers could be pushed farther. Something to Talk About and The Minnow and The Trout are each a little repetitive, and Feeling Good doesn't have quite the dramatic crescendos I would have hoped for. Even so, those weaker songs still have their good moments: the phrasing in the backs on The Minnow and The Trout creates a nice ripple effect; I just wish the song as a whole had had the same movement from verse to verse.

While I have seen how far this group has come since its last album, RARB scores are based on recorded a cappella as a whole, and so this album scores overall only a "3". But it's a "3" with a big asterisk: the group's biggest area of improvement is repeat listenability. Even with its problems, The Pink Album is one I actually enjoy listening to; there are tracks here that I will definitely keep in regular rotation. Congratulations to X-Factors on such a marked improvement and an enjoyable album. A trajectory like this is certainly promising for the future.

One final note: X-Factors should be careful with song credits. As I've mentioned previously on RARB, Feeling Good is not a Michael Bublé song, although that's how it's credited here. The song is originally from the 1965 musical The Roar of the Greasepaint — The Smell of the Crowd.

The Pink Album is a fine effort from X-Factors, a mixed collegiate group out of Northwestern University. Nothing really sticks out as being poorly conceived or executed, and the group is brimming with talented singers and arrangers. The album is pleasant and listenable, a testament to the rising quality of collegiate recordings.

If I'm lacking enthusiasm, it's because I've heard it all before. The Pink Album is fine, but it's virtually indistinguishable from a host of other collegiate efforts. The soloists rarely stand out or fully commit to their vocal performances (some noted exceptions: Mallory Moser on Something to Talk About, Maggie Gorman on Cosmic Love, Sam Fansler on Crazy Ever After, and most of all Will Kazda on You Don't Have To Believe Me). The intensity is strong at higher dynamic levels, but tends to fall flat during quieter or slower sections. Song choice is an area where the group does better, as X-Factors avoids the pitfalls of re-covering the contemporary a cappella canon, but You Were Born For This is a weak opener that starts the album off on a low note. (At least The Pink Album goes out on You Don't Have To Believe Me, which is hands down the best song on the album.)

Production, with tracking/editing/mixing from Plaid Productions and mastering from Dave Sperandio, is mostly strong. The mixes are clear and professional, never muddy or overstuffed. Soloists always pop out from the backgrounds, and don't get buried in the din. I'd also like to give kudos to the group and the production team for the killer organ sound that shows up in Cosmic Love and Something to Talk About; I'm not always a fan of sculpted vocal instruments, but that organ is pretty impressive and worthy of singling out.

Arrangements are good, with the lion's share of the charts being written by group member Will Kazda, and he showcases a real aptitude for collegiate writing. The album is mostly a collection of safe vocal transcriptions, though, and this is where the album's malaise comes to a head. Almost everything on The Pink Album has been done before, and done better, and it's difficult to listen to the album without noticing its lack of ambition. Innovation isn't a requirement for every album, but when the lush and bewitching dissonances of All My Mistakes are an album high point, it would be nice to have heard more adventurousness from the group.

The Pink Album is a prime example of why you should never judge a book by its cover. When I saw the title and smattering of neon and pastel all over the CD artwork, I expected to hear either a hot mess of diva pop or preppy, ironic college favorites. On the contrary, The Pink Album is a very classy assortment of tracks performed and mastered with a refreshing degree of musicality.

My favorite tracks are those that linger on the fringes of the mainstream. By now there are innumerable a cappella arrangements of Dog Days Are Over by Florence and the Machine, but X-Factors boldly went for the lesser known Cosmic Love. And the group nails it. Maggie Gorman sounds great on the solo, the arrangement builds nicely, and the production adds to the thunder without mangling the background. I'd never encountered Teitur before, but could not stop pressing repeat once I heard Will Kazda's chilling arrangement of All My Mistakes. The Minnow and The Trout and You Don't Have To Believe Me are the other worthwhile discoveries, with catchy grooves that show off the group's proficiency in a multitude of styles.

Some of the more common songs do not come off as well. Winter Winds and Crazy Ever After have some nice compositional moments but completely miss the timbre that makes the songs so charming when performed by the original artists. With Shark in The Water, the producers chose to emphasize the droning bass rhythms and cheesy soprano syllables rather than the syncopated tenor lines. Feeling Good is plagued by an unconvincing horn section and a pitchy soloist. All of these songs could have been easy hits with a few tweaks along their path to The Pink Album.

Maybe The Pink Album is not as groundbreaking a musical statement as the Beatles' The White Album, but it is definitely one worth hearing. It's fun to be introduced to songs in such a way that you want to investigate new artists. As cool as some effects sound in this age of hyper-production, it's nice to hear a touch of human tuning and genuine dynamic variation between the calm and the calamitous parts of each song. Countless elements go into perfecting an a cappella recording, and X-Factors gets an impressive portion of them right throughout The Pink Album. So ignore the tacky cover and enjoy the music, and look out for some of these songs on this year's crop of "Best Of" albums!