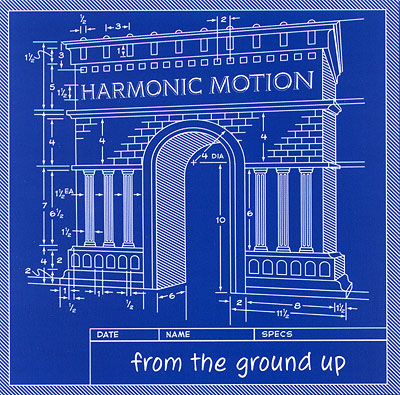 The debut from Brown's Harmonic Motion triumphs in its listenability — the whole is definitely bigger than the sum of the parts, and the disc works as a unit. When you start to take the pieces apart, most tracks can't live up to close scrutiny. Yet this album is a much better candidate for play than other albums with more technique and less clue.

On an individual level, opening track criminal is as good as it gets, which is limited to a resounding "pretty decent". The song is well tuned, has a nice solo that shows some real promise in places and holds down the fort throughout. But ultimately, it's lacking in edge — this is a sweet-tempered rendition of a not-so-sweet song.

The Freshman is a slightly better than average rendition which is lifted to the next level by a first-rate percussion track. Drums are good throughout the disk, but they really shine on this track. Jason Blumenkrantz displays a top-notch variety of sounds along with the ability to string them together, and he continues the great Brown tradition of better snare drums than the rest of you suckers.

As songs go, I also like Omaha — what it lacks in polish it makes up for in an individual attitude. Doesn't sound much like the Counting Crows, but does give the song a sort of Neil Young flavor that suits it well. What a Good Boy is another nice mood piece, with an ear-catching alto soloist, but periodic tuning issues sink it as a unified track.

There are a couple of odd inserts buried in these songs — a brief Scooby Doo reference in the Chris Isaak track, and a needless, summer-campy Kookaburra tag on the end of Land Down Under. I bet both could be funny on stage with sight gags, but it might have been a good call to leave them off the album.

Strangely, spunk makes its other appearance buried deep in the midst of Take a Chance on Me, a busy little number that is in many ways one of the weakest on the disc. But the soloist seems to think about the promises she's making and add the oomph missing from so much of the repertoire.

The lack of oomph may limit this album's artistic mobility, but it certainly doesn't kill the album's ability to work as a whole. If you like the genre, this is a nice way to round out a collection and add a new voice to the repertoire.

Harmonic Motion, a coed group from Brown that was allegedly formed in the Fall of 1996, claims that From the Ground Up is their first CD. That's a load of crap. I have listened to this CD repeatedly and, although there are some rookie mistakes on some songs, I am sure that this cannot possibly be a debut recording. The quality of the arrangement and the solos are too high. As a whole, the group performs with the confidence of a well-seasoned ensemble. That they choose to lie about their age is simply sad.

HM's sound, which they've obviously been developing for years, is sort of like the mighty arrangements of Off the Beat softened by the warmer tone and simple pleasures of Artists in Resonance. The driving force behind that sound is Jason Blumenkrantz. In addition to supplying many likeable arrangements, he also provides the vocal percussion for 11 out of 12 tracks. In the liner notes, instead of being listed as a tenor or bass, he is simply labeled a "Monotone". But what a tone it is! His soft brush sounds really define the sound of the whole group. He spits out his sounds as if it where the simplest thing in the world, but that easy-going sound can't hide the relentless cleverness of the percussion arrangements. I'd argue that he should get nominated for a best soloist CARA award, but, as I said earlier, everyone in this group is lying about their experience. I think his dishonesty should disqualify him.

The only problem with this album is that it tends to lose steam halfway through. It gets off to a strong start with Criminal and The Freshman. It takes a wrong turn with Big Bad Voodoo Daddy's Mambo Swing — neo swing needs an ass-kicking drummer pounding out that beat in order to work and, even with three people on vocal percussion, it's hard/impossible to pull that off a cappella. They get back on track with an intriguing solo on What a Good Boy (even though having a woman take the lead makes some of the lyrics sound a bit odd). If You Could Only See is yet another solid cover of this oft-covered song. The soloist on Shape of My Heart sounds like he's about to cross the line from "vibrato" to "just plain nervous" but it all works on the big harmonies. Torn is nice enough, but things go south when Somebody's Crying comes around. It's almost the best song on the album, but the soloist tries to imitate Chris Isaak's falsetto-for-just-one-word trick. It works for Chris, but it doesn't work here. (Did you see the Friends episode where Chris Isaak and Pheobe sang a duet of Smelly Cat? Chris launches into his falsetto thing, and Pheobe stops him. "Maybe," she says, "you should pick a more masculine note.") If they had sung the notes that naturally belonged in the song, it would have been killer cover. Take A Chance on Me is a little too mechanical and Sweet Surrender needs a little more drive in the backing vocals. The solo in Omaha gets too awkwardly clipped, and that makes it hard to get into the song. Down Under is okay, but it's an anticlimactic closing track. While the last part of the disc doesn't live up to the promise of the first part, on the whole this CD is good enough to prove it's not a debut recording, no way, no how. You should give the kids in Harmonic Motion a listen. I should call the Dean of Students at Brown and report them for violating the honor code.

Harmonic Motion should have spent more time in the practice room and more time in the studio before releasing From The Ground Up. The dynamics are practically absent, the blend is terrible, intonation is troubled and most of the arrangements don't do much for me. Originality is largely absent and energy is lacking.

On the upside, there are a few really terrific soloists (Lauren stands out) and some solos that, while not as spectacular, still show real promise. Also, the musical selections themselves were great: just looking at the titles had me pumped for the album; it's actually listening that makes me not so pumped.

In short, Harmonic Motion's album is premature. Glimpses of real talent show through, but terribly sloppy musicianship pulls this recording way down. I advise potential buyers to skip this one.

From the Ground Up, from Harmonic Motion, certainly shows more than mere foundation. The group has an obvious enthusiasm for their music and an even more apparent familiarity with one another: they sound as if they sing together; this is all the more impressive for the album representing a range of membership.

Part of what pleases me about this disc is the range of music: straying from '80s tin, the group tests its mettle in a number of different areas. Although they do not always achieve equal aplomb, they perform quite admirably all around. Down Under, for example, a definite '80s piece, lacks the characteristic shine that decade gave to its music. More successful is Torn, in part because of a convincing soloist and also from a chorus which seems interested in the drama of the piece.

The soloists in generally are good, although I am more impressed with the female turns (e.g. the low alto of What a Good Boy actually turns in a better, higher performance later on, while the male lead on Mambo Swing is a little limp). Percussion is tastefully added almost throughout, although the quality varies significantly from song to song, with a good deal of pretty amateurish ksh ksh stuff and every so often some nice crisp snare (pf' pf'); all the same, I do like that it complements, rather than overpowering, the vocals.

Arrangements are decently complex, with some nice changes of pace from the more standard vowels and syllables. Kudos especially to the man behind most of the music.

A good collegiate effort. If not now then certainly soon this group should be showing its face and strutting its stuff on BOCA.

The ladies and gentlemen of Harmonic Motion, in the group's infancy, have quite a tradition to follow in a geographic area rich in excellent groups from the Ivy League schools. Yet, despite being just two years old, HM has put together a collection of songs, many which I've never heard covered before, and created a pleasant recording in their first attempt.

Rather than relying on the traditional standards, HM has arranged twelve tracks, with eleven of them being good or better (sorry, but I just didn't like the cover of Chris Isaak's Somebody's Crying... perhaps the execution more than the arrangement, but the track rubbed me the wrong way).

On a pure enjoyment level, each of the tracks display a pretty good sense of the basics of blend and pitch. If there is anything to be nitpicked, it would be along two lines: first, there needs to be a slightly better awareness of group capabilities with regard to range and stamina, with specific regards to Mambo Swing. While it was pretty good, the high soprano lines which are repeated seemingly endlessly and it seemed their stamina at maintaining that repetition waned about halfway through. Second, and this comes over time as the group gains experience, is the measured, unspontaneous nature some of the tracks took, more notably in the middle set of tracks (#5-#7).

It is, however, the strong start of the first two tracks that sucked me in to this recording and eventually held me throughout. Honestly, I wouldn't go out of my way to get this recording, but it is a fine recording, and an excellent base to start from...it would be a worthwhile CD to buy if the mood struck you.

Please send a $15 check payable to Harmonic Motion to: