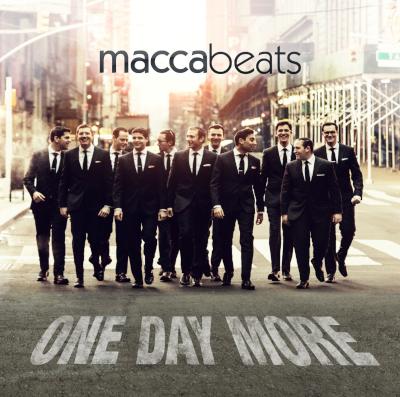 It all starts with a strong unifying theme, one which is introspective and charmingly full of perspective. Add a talented collection of arrangers, some of the best producers/mixers in the business, and a few original songs, and you're on your way to a first-class album. At least, that's what I thought as I first dug into One Day More, the latest album from collegiate-turned-professional Jewish group The Maccabeats. In some ways this proved correct, as there is plenty of well-conceived and produced music on this third album from the male group formerly affiliated with Yeshiva University. (Full disclosure: my law degree is from the Cardozo School of Law, a part of Yeshiva University, though the group formed after I graduated and I have no connection with them.) Unfortunately, it's not enough to have the right ingredients; you also have to do something special with them to create a unique and memorable product.

The liner notes for One Day More begin with a cogent, admirable explanation of the animating goals behind the album, which the group professes to be symbolic of its permanence, a reflection on the path it has taken to get here, the people it has touched along the way, and a plan for where it intends to go in the future. The problem lies in the answer the group derived from the final goal: namely, commerciality without revealing enough personality. I understand the Maccabeats are on a path traveled by few vocal groups, as they have morphed into an internationally recognized symbol of Jewish a cappella music with performances on major American network television (The Today Show, The Early Show), for the President of the United States, all over the country and over 5 million YouTube views.

I do not take issue with their goals, nor do I doubt their sincerity to "spread literal and figurative harmony." I just wish their delivery vehicle for that goal had a little more personality and a little more life. I suspect many, perhaps even most, people will absolutely love the polished sheen on most of these songs, as the album sounds entirely radio-friendly and radio-ready. This is unsurprising, as the team of mixing engineers includes commercially successful a cappella producers like Ed Boyer and Bill Hare. The former has tremendous skill in putting out sleek, loud, shiny pop as he does with Acheinu and Brave, but it is Hare who manages to tease a little heart and soul out of the group on the original Shine and some dynamic and sonic contrasts on the cover of Ellie Goulding's Burn. Kudos also to Alex Green of Plaid Productions for his delicate work on the nicely textured original Eishet Chayil.

Another successful selection is the collaboration with Benny Friedman and Six13 on the medley Yesh Tikvah/Ki Malacahv/Mi Shemaamin. The arrangement by Mike Boxer (of Six13) offers the first evidence of dynamic contrast as the group slides into and out of the tender Ki Malachav from the two bookend songs with 4-on-the-floor, driving beats. The thing is, the medley sounds very much like a Six13 production, and the Maccabeats would be well-served to learn from Boxer's successful track record of creating such a trademark sound for his group. In their videos, the Maccabeats demonstrate a quirky, funny group with sleek sounds, but aside from the hidden track (a parody of Psy's Gangnam Style called Sukkos Style), this album is a more serious affair, and the group's character suffers from the transition.

The Les Misérables Medley is probably the best example of the overarching dilemma with the album. The arrangement by Deke Sharon is brilliant and seamless, squeezing many of the best parts of a nearly three-hour musical into less than six minutes without offending the show's integrity. The problem is the group expends so much effort on the undoubtedly difficult technicalities of the music that there is simply no earnestness and emotion available to deliver the powerful lyrics. The result is somehow one-dimensional despite the broad and generous palette created by Sharon's arrangement.

I realize this all comes across as negative, yet my scores are actually high. Here's the thing: this is a very good album. It's just not quite the album I want from a group that is breaking boundaries for a cappella music, for Jewish music, for Jewish a cappella music, all in such an honest way, and doing so with some of the best teammates the business has to offer. It's professional-quality music, minus the emotional connection that purportedly motivates the album's existence. If that's fine for you, there may be few albums released this year which offer it up better. However, if you want a little more life and personality in your music, stick to Shine, Yesh Tikvah/KiMalachav/Mi Shemaamin, and Eishet Chayil, with Burn there to satisfy your shiny pop cover cravings. While the Maccabeats have revealed much about their personalities in the liner notes for One Day More, I really hope to see them share more of this in their performances on future releases.

Though I don't speak a lick of Hebrew, I didn't find myself needing to in order to enjoy the Maccabeats' One Day More. This being my first encounter with the Maccabeats, I was unsure what to expect. Would I be shut out from an engrossing listening experience from a cultural gap in understanding? The answer is a resounding no. Weaving together an even tempered and well paced roster of songs of Hebrew and modern mainstream pop origin, the Maccabeats have created a clean, silky smooth album that plays well from start to finish.

One of things I readily appreciated is that the Maccabeats worked around an actual concept as opposed to a Now That's What I Call Music approach of assembling random top 40 hits.

From what I gather, One Day More borrows its name and its theme (at least partially) from the song of the same name in the musical Les Misérables. Revolving around the central idea of perseverance in the face of struggle, the album does well with embodying its theme through the Maccabeats' careful song choice and solid vocal delivery.

I found the group's general blend of backing vocals to be well balanced and produced without any exaggerated effects. The backing vocals do well to support the soloists with consistent energy without pushing them to sing with bright, overzealous sounding tones in order to achieve it. Great examples of this can be heard in Lemaan and the well-executed original song Shine.

Some go-tos for me are Malchei HaMelachim, Yesh Tikvah, Burn (Ellie Goulding) and Nachamu. The Maccabeats' rendition of One Day (Reprise) was also a pleasant surprise, again delivering a solid injection of energy and contrasting sections in a popularly covered song.

In all, the Maccabeats have fused enough mainstream pop and traditional Hebrew to create a recording that not only entertains, but seems faithful to the group's theme and focus.

As someone who majored in theatre in college, the phrase One Day More is no stranger to me. In fact, if it wasn't for Les Misérables, I would never have been involved in music in the first place. The music from that show has a special place in my heart, and to see an a cappella album named after the epic Act I closer causes equal parts excitement and trepidation. While obviously excited for the content, I was immediately concerned that the medley, and an album structured around the phrase itself (explained exceptionally well in the liner notes, thank you gents) would not live up to any standards I had in place already.

I was foolish to worry. The boys of the Maccabeats blew me away entirely. Everything pulses and flows organically, tuned with expert precision. The intricacy of the covers, mash-ups, and many other completely original compositions is impressive by itself, but the combination of going from one innovative arrangement to the next is enrapturing. The pacing is swell, building from the start into the first original number, Shine, which pops brightly and snappily in all the right ways. The energy pushes right into the second original song, Eishet Chayil, which pulls back the pace and lets you savor what you've gone through to that point while wrapped in the sound cloud billowing around it.  This, in turn, brilliantly leads to the album's Act I closer of sorts, the Les Miz Medley.

The medley has a lot of good going for it: it encompasses the important motifs from the original, adding the precise amount of background spice an a cappella version must have.  I was a little miffed that the lyric choices were lacking the important bits from each song, but it wasn't a huge detractor.  For a group with exceptional blend and color, I was hoping for a little more range to be demonstrated (especially with the chord at the end of the One Day More section, there are some high soprano parts that I was craving and didn't get), but the mark of true musicians is the ability to be masters of what is in their control, without overreaching for something unavailable. In this aspect, the Maccabeats display some of the finest mastery of their sound I've heard from any a cappella group today.

The "second act," so to speak, features most of the covers. They're functional, with a little added on top to keep them from being stale. The bass patterns added to Cups make this cover far superior to the popularized Pitch Perfect version, and the chords in Burn grind to the perfect color. Brave is the most stagnant, lacking any real pop to make it the Maccabeats' own. The album closes with the exceptional One Day (Reprise), which I note as having the most emotion backing it. I teared up when it came around to the chorus, the soloist perfectly capturing the raw feeling behind the desire to "fight no more." Beautiful.

Plus, if you stick around for a minute after the end, a lovely little Gangnam Style parody plays, which then leads right back to the opener (if you have a CD player that loops) and it starts all over again. No one's mad.