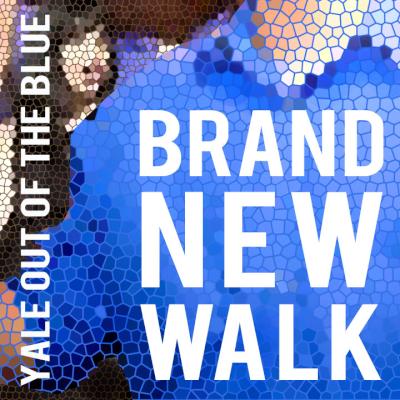 Yale Out of the Blue's Brand New Walk has but three tracks: Jar of Hearts, Bottom of the River, and Something's Got a Hold On Me / Candyman. It's more a maxi-single than an album. But shorter projects can offer a singular sound and thereby make a more precisely defined artistic statement. That opportunity is escewed here. Each song stands notably distinct from the others, giving Brand New Walk a somewhat staggered gait.

Something's Got a Hold On Me / Candyman has a spirited lead in Kate Taylor-Mighty. The licks are there, though the songs have little substance and the arrangement by Andre Shomorony and David Ottenheimer is best suited for theme park audiences, being both bombastic and deliberately clichéd. Yes, they know their chords, but many listeners won't find much here beyond the love of singing. Ted Trembinski's editing is so precise, perfectly pitch and rhythm corrected and immaculately clean, that the track thirsts for the organic essence that made similar material like Shout and more recently, Mercy so compelling.

Jar of Hearts' Sana Sharma tiptoes a tender lead that whispers and skips through the melody with a touching vulnerability. The track is marred by artificially overtuned and nicely dynamic, but overly emphatic backs. "Dah dah din" is delivered like a meaningful phrase, essential to the story, which it isn't. Perfection is once again the enemy of greatness. David Ottenheimer's arrangement shows nice appreciation for the underlying story, though subtler syllables -or at least their delivery- would have translated better in the studio.

Bottom of the River rises to the top of the tracks. The lead, Aviva Musicus (have you ever heard a cooler name?) rocks the living bejeezuz out of the song with fearless vocal abandon and explosive emotion. Harris Eppsteiner's killer arrangement and Trembinski and Alex Green's solid production join together to perfectly capture the dirty, chain gang quality demanded by this earthy track. Even the percussive stomps and body percussion make this an excellent complement to songs like Marc Broussard's Home.

Readers may be interested to know that Something's Got a Hold on Me was composed by Etta James, Leroy Kirkland, and Pearl Woods; Candyman was composed by Christina Aguilera and Linda Perry; Jar of Hearts was composed by Christina Perri, Drew Lawrence, and Barrett Yeretsian; and Bottom of the River by Eric Holljes and Ian Holljes. But whether or not readers are interested to know it, best practices for Liner Notes (see this Liner Notes article) require that all composers be credited. Out of the Blue simply omits all composers names. Yale University's self-described "most progressive" group may want to at least give proper credit on their web page, and certainly on future releases.

Brand New Walk is comprised of the three songs that OOTB believes "defined their journey to the ICCA finals". Genre-contrast and emphatic diction convey something fundamentally different in the live context, with a cheering crowd in a competition, and where only some members of the group are on microphone. Live leads and live backs in ICCA competitions can't (currently) avail themselves of intonation and rhythm correction software. This EP might be worth selling at such competitions and it might make some fans happy, but plucked from that environment, this isn't a cohesive recording, but rather a short collection of songs with varying appeal.

I've always had a soft spot for the EP, since it brings with it a new set of considerations for album construction and song choice, but it has a more essentialist attitude than the full album. It also presents an opportunity for school or up-and-coming professional groups to focus their time and attention on a smaller number of songs, hopefully ensuring consistency and quality control.

Brand New Walk is a fine example of the advantages of the format, with Out of the Blue providing a sonic sampler that leaves me wanting to hear more rather than wearing on my nerves. The three songs presented here are all solidly executed and lightly contrasting — Something's Got a Hold On Me / Candyman is a vocal jazzy take on the two appropriately mashed-up tunes, Jar of Hearts is a tasteful and spirited ballad, and Bottom of the River is a fantastic slow-burn of a song that makes for an exceptional album closer.

While the album works quite well as a whole, some individual elements don't quite hold up as well. The Etta James/Christina Aguilera mashup of Something's Got a Hold On Me / Candyman avoids a lot of typical mashup pitfalls, but the arrangement dips into self-parody with its self-consciously goofy syllables. There are also moments where Kate Taylor-Mighty's fine solo gets buried under overbearing and arch background vocals.

There are also some standout moments: soloist Aviva Musicus absolutely slays Bottom of the River, David Ottenheimer's delicate and appropriate arrangement of Jar of Hearts shows just how to handle a contemporary ballad, and the whole album shimmers with its well-crafted soundscapes.

Brand New Walk is a solid effort, and should serve as an encouragement to a cappella groups out there: you don't need to always produce a full album, as sometimes less can definitely be more.

Brand New Walk, a three-song EP from Yale's Out of the Blue, is hopefully the precursor to a more comprehensive look at who this group is. This mini-album features some really good singing and fun arrangements that are aided by effective engineering.

The trio of Ted Trembinski, Alex Green, and Tat Tong is a winning one. Brand New Walk is clear and organic, a welcome departure from the overproduced albums that dominate the a cappella landscape. It's a thinner, cooler sound than much of what's out there — not necessarily better or worse, but a distinct difference that sets this EP apart. Should Yale's Out of the Blue look to turn these tracks into a full-blown album, I'd suggest they stick with the same production team. It works for them.

While the first two tracks are pleasing, they're nothing to write home about. Both fall victim to over-singing on the part of the soloist. Bottom of the River is the standout, much thanks to Aviva Musicus on lead. Her effortless sass transitions into a powerful belt and fits the song perfectly. The trio complements her voice nicely, and the simplicity of the arrangement is a nice change from Something's Got a Hold On Me / Candyman and Jar of Hearts.

Overall, Brand New Walk is a really good start. The variety is compelling, the arrangements are fun to listen to, and the singers are talented. With a bit more attention to detail, the soloists in question will be able to hone their skills and produce the sound that the group deserves.

To order a physical album, visit the group's online store.