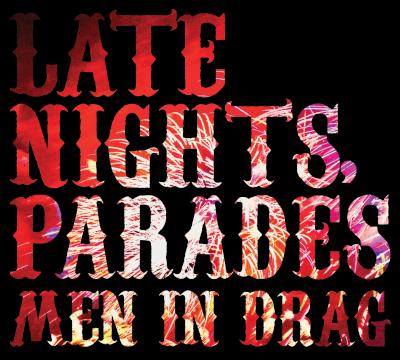 Not to read too much into a title, but the slightly disjointed name for Men in Drag's release, Late Nights, Parades — adapted from a lyric from the closing cut, On the Wing — is apropros for an album that itself is a bit disjointed, careening a bit from extreme to extreme. Sometimes it's too much; sometimes it's too little; sometimes it's just right. When it fails, it does so nobly and with what one has to believe are good intentions. When it succeeds, it's extremely enjoyable.

All but one of the tracks are arranged by Brianne Holland (of Voices in Your Head's well-known, well-watched, well-discussed Titanium), and if you read my reviews with regularity, you know that one person so dominating the arranging on a collegiate a cappella album rarely meets my approval. It's perhaps surprising, then, that I'm not as bothered by the arranging as I might typically be — but it's not necessarily for a positive reason.

Whereas having predominantly one arranger often yields a sameness of approach — especially with often-uninteresting repertoire — here the material is so all over the map and the arranging approaches vary quite a bit from song to song, so repetitiveness is not a meaningful concern. What is a concern at times, however, is development, consistency, and cohesiveness within a given song (and sometimes in the flow of the CD from song to song).

To wit, the opening two songs showcase a take-no-prisoners attitude that comes searing through the group's sound: backgrounds that consist of bass, vp, and lots of group wailing and belting and sliding and — dare I say — shouting at times. It's an entertaining groove at first, but it grows tired quickly. Building off a sparse feel is one thing. Building up from a slow burn to a fierce level of ferocity and intensity is a great thing. But starting there and staying there for an entire song or two is just a bit taxing on the ears. The CARA-winning original Something in the Water could use a little more ebb and flow but no question it is a gutsy way to start the album. Following so closely with the repetitive Cherry Pie is not as savvy — it's not nearly as interesting a song and it suffers by comparison to the opener with its endless repetition and unyielding volume.

Hurt is perhaps the most intriguing arrangement I've come across in a while, and yet I can't help but feel that to the extent the desire was to try to find a vocal equivalent of the raw and stripped-down feel of the original, the arrangement doesn't quite commit entirely to the concept. Instead, we get a version that seems to be fighting with itself over whether it wants to be slightly more avant-garde or more "traditional" in its use of background elements.

Sometimes it's just leaning too much on one element that prevents a given song from truly soaring. On Fooling Yourself (The Angry Young Man), it's the gimmicky synth sound that dominates and ultimately distracts from pretty much everything else going on. Sure, it shows off someone's vocal dexterity (unsure if it's soloist Nora Bingham), but it's a bit of a one-trick pony. On Morningside, it's hard not to feel that the track is 80% Tat Tong and 20% Men in Drag, given how monotonous and devoid of humanity the majority of the song feels. Ditto for Pretty Girl Rock, which starts with some nice texture but eventually devolves into a slightly cheesy rap and a background figure that just repeats endlessly.

So as not to harp only on the negative, I should note that the standout tracks are Bad Things and the CARA-nominated On the Wing which ends the album. Bad Things starts a bit better than it finishes, primarily because of the soloist's comfort level in the lower register and the clean-ness of the front half which gets a little messy by the end. On the Wing finds just the right mixture of the rough-around-the-edges sound that the group seems to prefer with the aurally-satisfying, richly chordal, expansive sound your ear is itching to hear by that point. Indeed, the album seems to struggle with that push-pull throughout and the closer is finally a happy union of the two.

With all of this said, even with its missteps, almost everything on Late Nights, Parades is at least the equal of many of the better collegiate groups around the country, all-female or otherwise. What's more, you can almost feel the thoughtfulness and intelligence that went into the development of the material. Whether it always works or doesn't, there's craft and attention to detail abound. And when was the last time I could say that about a collegiate album that wasn't by The Beelzebubs?

Late Nights, Parades is almost everything a listener could want in an album. This release by the University of Chicago's Men in Drag has got it all — beguiling soloists, intriguing arrangements, and breathtaking energy. The total package comes across as a theatrical production of the life and times of a ballsy college sorority. It is pretty much a slice of Heaven, or at least like a musicalized version of Sex and the City.

The first three tracks are ridiculous. But they are also as different from one another as possible while still having a similar experiential effect. Something in the Water is sassy, daring the listener to be passively engaged with the track worming its way into the psyche. I found my shoulders bouncing every time I listened to it. And the fact that it's an original is just icing on the cake. Cherry Pie is aggressive — it rocks like you wouldn't believe. It's one of my favorite up-tempo songs of the year, being extremely retro yet progressive all at once. Hurt is evocative — I almost said "emotional", but of course it is emotional considering the source material. There is just something about the minimalist arranging that causes a somber reaction yet cathartic result. Blessed.

After that amazing opening though, the rest of the album is a bit of a let down. Not that any of it is bad, but nothing else approaches the excellence of the openers.

Production seems a bit muddy on the middle tracks. Bad Things is a great song, but after the bombast of Cherry Pie, the aural palette seems layered with thick gauze that dampens some of the seductive qualities of the original. The arrangements seem slightly too simplistic to carry the weight of the musicality of the performers. These ladies have some chops, blending like, well, not quite like banshees ... but with a lot of sublime technique.

Bravura and machismo abound on this disc! The sonic explosion that nearly happened after I listened to Pretty Girl Rock and Bad Things with Cherry Pie was palpable. I'm talking about rafter-shaking. The rest of the album just doesn't seem to jibe with what the ladies have presented earlier.

But those minor quibbles are just that. Get this album and you'll have a wonderful time. Trust.

The women in the University of Chicago's Men in Drag are not risk-averse. Their latest album, Late Nights, Parades, opens with an original song (!) and proceeds through a slew of covers that aren't often heard in all-female a cappella. Warrant's Cherry Pie? NIN's Hurt? Not exactly typical girl-group material.

Despite all the unusual choices here, my favorite track is the Noisettes' cover Never Forget You, a Motown-influenced song by a female-fronted indie rock band that lends itself beautifully to a cappella (and all-female a cappella as well). Men in Drag do a great job with this track, so kudos to arranger Nora Augustine and soloist Alicia Caillier (plus the rest of MID) for this one.

With some of the nonstandard choices, the Men in Drag struggle a little bit. Cherry Pie is a little too campy (I guess the original is, too), and Fooling Yourself (The Angry Young Man) is a note-perfect transcription of the original, but the group never quite captures the song's soul. Other songs are more mixed: the harmonies in the opening lines of Hurt are fairly distracting — although the song redeems itself by the haunting climax — while Pretty Girl Rock never really grows or climaxes at all (which is rough for a song that's over four minutes long!).

Despite some issues, there are a fair number of great songs here. Bad Things starts off eerily and ends with a passionate wail. Morningside is equally solid — and while Sara Bareilles is a regular choice for all-female groups, Men in Drag have chosen a less-frequently covered song here. The original song Something in the Water (lyrics by Markie Gray and music by Brianne Holland) fits with the rest of the rock songs on this album, such as the solid, grooving My Body. The arrangement for On the Wing is outstanding. Speaking of arranging, the album as a whole benefits from the consistent arranging voice of Brianne Holland (who arranged all the tracks here except Never Forget You); all ten of these songs sound cohesive, and that goes a long way towards making Late Nights, Parades feel like an album, rather than just a mixtape of favorite songs.

As a whole, Late Nights, Parades isn't perfect, but you can't deny that this group has ambition. These ladies really seem to be reaching for a different goal than many of the other all-female collegiate groups. They don't always hit that mark, but when they do, they create songs that are truly memorable and unusual.

One final note: it's much appreciated that Men in Drag provide songwriter credits along with the standard "OPB" credits. The liner notes and packaging for Late Nights, Parades are both excellent.