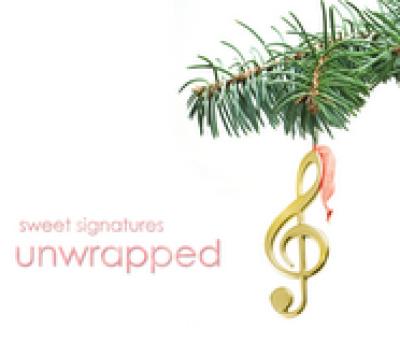 The Sweet Signatures are aptly named; hardly a note is sung that isn't actually quite sweet. While contemporary fans won't find much edginess here, there is a genuine warmth and kindness to these voices that might find more than a few sympathetic ears around Christmastime.

Unwrapped is a collection of nine Christmas songs, most well-known classics. MacKenzie Roberts swings Santa Baby out of the gate for a delightfully Betty Boop-ish opening. But Georgina Oram's initially traditional arrangement takes a dark turn in the middle which strains the lighthearted and flirtatious nature of the song. Despite its debatable efficacy, one welcomes the experiment, nonetheless. Winter Song opens with a simple homophonic "plum-plum". The effect is beautiful and striking. Only the later use of "zsa-dah" syllables snap the listener out of the blissful emotions of the song, and into the more cloying cleverness of collegiate arranging. Silent Night/Night of Silence moves through the traditional with a few delightful drops of unexpected progressions. Love is Christmas has a crossover country earnestness with rich, simple backs that layer like strings. Gentle, heartfelt songs like these are exactly the sound that Sweet Signatures does best.

All I Want for Christmas is You, and the ending of O Holy Night, by contrast demand big solo vocals and a full sound. Producer Dave Sperandio lays out the studio enhancements, from distortion to enhanced vp, to octavizer, but the efforts just don't mesh well with these heady voices. The shoes are lovely, but these feet are too dainty to wear them.

Deck the Halls and What Christmas Means to Me nearly split the difference, and perhaps, had the percussion and production sounded more lounge, or trip-hip, and less rock, these songs would have truly bridged the best of both worlds. The arrangement of the former by Amy McNabb certainly shows a willingness to freely explore the material.

The ladies of Sweet Signatures do all of their own arranging and it's a pleasure to hear their twists on these classics. However, while the arrangers are credited, the composers are not. A Refresher on Liner Notes could help correct this glaring ommission not only on the next album, but also on any digital releases or web listings, something these composers deserve.

Unwrapped may not be a perfect fit, but it offers many moments of beautiful singing and a few pleasant surprises.

Criticisms of all-female groups are fairly predictable: there's too much high end and not enough range, the blend is too choral, the vocal percussion is unconvincing, and the overall sound is too "sweet" for many contemporary pop/rock songs. Elon's Sweet Signatures face many of these same challenges, but use them to their advantage on Unwrapped, an album of holiday tunes. On Christmas songs, a choral sound works in the group's favor, as a sweet, soprano-heavy sound gives the songs an angelic feel.  The overall sound the group has chosen here might not work for a contemporary album, but it certainly makes for a pleasant holiday album.

Santa Baby and Winter Song are highlights here; both are true to their originals, with Santa Baby maintaining its cheeky sass and Winter Song carrying the beautiful harmonic serenity of the Sara Bareilles/Ingrid Michaelson original duet. The Sweet Sigs take on another Bareilles song with great warmth; Love is Christmas features a wonderfully emotional and beautifully understated solo from Kelly Selong.

The uptempo pop of What Christmas Means to Me really moves nicely, and the addition of some percussion (and some sleighbell-chimes) gives this song a nice tone. Silent Night/Night of Silence brings Night of Silence into the Christmas tune Silent Night as a quodlibet; the song itself is lovely, but the opening solo suffers from some tempo issues that get the song off to a rocky start.

The group takes a few risks here, which don't always pan out.  Arranger Amy McNabb turns Deck the Halls into a jazzy number, which is an interesting variation on the original but doesn't really ever gel. Even though the group's choral sound works well for many of these songs, Oh Come, All Ye Faithful is just a little too soprano-heavy and could've benefited from a broader range.

The weakest song here, though, is the closing number, O Holy Night. It almost sounds as though the group is singing two different songs: the sweet, reverent solo, with a backing arrangement that tries to rock out (there's a really jarring transition from verse to chorus that just doesn't mesh with the song at all). The percussion is awkward, recalling some of the worst criticisms of all-female a cappella. It's an unfortunate end to an otherwise pleasant album.

On a separate note, the group made no effort in the liner notes to credit songwriters and composers, not for the contemporary tunes, not for the older Christmas songs, and not for any of the traditional tunes. This is a disappointing oversight for a group who had credited performers (but not composers) on its previous album Love Affair, making the album credits for Unwrapped a step backwards for the group.

The album features modern Christmas music amongst classic favorites like Deck the Halls and O Holy Night, all while staying true to the Signatures' warm, rich sound. Soloists are fantastic as well, especially Kelly Sykes, who gives Mariah Carey a run for her money. Arrangements are engaging and well-executed (all written by Signatures and alumae, with the exception of Oh Come, All Ye Faithful).

Unwrapped could use a few tweaks to take it to the next level. The album is very front-loaded with upbeat tracks like Santa Baby, All I Want for Christmas is You, and Deck the Halls, leaving the latter half of the album to suffer with slow-moving tracks like Silent Night/Night of Silence, Love is Christmas, and O Holy Night. And while Sara Bareilles' Love is Christmas is perfectly acceptable here, Winter Song is not a Christmas song. Though it is a beautiful arrangement (written by Signatures' alumna, Kate Austin), Winter Song suffers amongst the collection of traditional Christmas music.

The Sweet Signatures are a very talented group of ladies. Unwrapped features a different vocal percussionist for every track, nearly every member has a solo, and all arrangements are written by current Signatures and alumae (again, with the exception of Oh Come, All Ye Faithful). These ladies truly deliver an energetic and engaging album. If you enjoy Christmas music, this album will make a great addition to your collection.