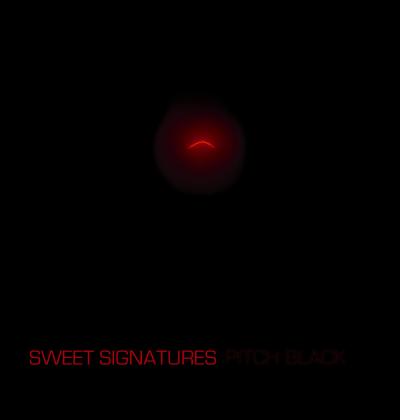 I sometimes hate it when I have to not only compare a group's CD to all recorded a cappella but also to my live experience with the group. The comparing/critiquing is easy when there is a major disjunct between the two personas (live, amazing/recorded, terrible and vice versa). Reviewing is much more difficult when the discrepancy has a smaller range, but is no less aggravating. Such is the case with Elon University's Sweet Signatures and their second album Pitch Black.

The ladies of Sweet Signatures are near stellar performers as anyone at SoJam '04 can attest. They are blessed with strong soloists, a fully-produced wall-of-sound, spot on tuning, commanding stage presence and an exceptionally talented vocal percussionist in Christine Piché. And while the recording captures the essence of the group, it exposes the flaws which are often glossed over in performance: weak, repetitive arrangements, a lack of a soul-stirring bass foundation and a repertoire more clichéd than current.

I don't want to make it seem like I think the album is bad. It's not, by any stretch of the imagination. Pitch Black leaves you wanting more, just not in a good way. It's a frustrating piece of work, because this amazing female group has put out what I consider a highly average album.

One song epitomizes the major problem that I have with this recording: Stacy "Kit" Lear's outstanding arrangement of Sweet Surrender, an arrangement that is almost a decade old. Yet, other than Alexandra Apostolou's Amsterdam it is the most contemporary-sounding/arranged song on the album. When Kit was arranging, female groups weren't really stretching the limits for their Alto 2s and no one inside collegiate a cappella had heard of an octavizer because The Sirens hadn't formed yet. The power doesn't come from some rumbling bass, but the interplay of the upper voices to create a sublimely textured work. The arrangers in Sweet Signatures are satisfied repeating the light-on-the-bass formula without the needed intricacy in arrangement to make it sound like it's there.

The sound production and mixing is much more organic than I would have anticipated from a Diovoce engineered recording. Not a damning comment for either party involved; I'm as much a proponent of the "easily reproducable" sound as I am the "highly enhanced" approach. Especially in this case because it proves beyond a shadow of a doubt that these women sing well. But I wanted a WOW! when I opened the CD case and loaded up the iPod Mini — a reminder of why I liked them so much last year. I didn't get that this go around. Pitch Black is a comfortable CD from a group that has far outgrown that type of limitation.

I found myself strangely compelled to like the all-female Elon Sweet Signatures' latest release, Pitch Black. It shows a sense of quality and vision not typical of most collegiate albums, which makes up for the sometimes lackluster performances.

Elon found a winning combination — short and sweet. With most tracks almost abrasively energetic, the entire album comes in under forty minutes, doing a decent job of keeping the listener entertained throughout. This is also a detracting factor as well, as these women just fly through tracks. Several of the tracks feel rushed, the worst offender being These Are Days which goes by at nearly light speed. Arrangements are good but essentially all the same thing and overly percussive, which gets repetitive.

Production is also quite high quality. Sweet Child o' Mine is clearly the most hyper-produced, with careful use of looping and effects. Percussion is solid throughout. The album suffers from the "cars passing by on the highway" syndrome, however: sound gets panned from ear to ear on dramatic hairpins, which gets annoying and distracting. The worst offenders are She Will Be Loved and These Are Days, though the former is tempered by an excellent solo.

Soloists are above average, with an amazing standout job on Amsterdam, the opener, with excellent expression throughout the range. The women are wonderfully confident, giving winning performances. Weakest is Son of Preacher which is strident instead of soulful.

All in all, it's a good album. It's full of all the bells and whistles common of higher level collegiate albums but lacking musicality and a sense of subtlety. It's a polished effort that just didn't move me.

Okay, kids, this is what I'm talking about when I ask soloists not to force their voices to sound like something it's not. By far, the most impressive thing about Sweet Signatures' new album, Pitch Black, is the honesty of the soloists. These girls don't try to fit their square peg into a round hole like most groups do. Instead, they smack that stubborn hole around in a dark alley until it decides to become a square hole. I get the impression that the soloists took the time to digest what it was that they were singing about instead of just trying to regurgitate the original artist into a microphone. Pitch Black is a great example of capturing the soul of a song without sacrificing its character.

The Sigs aren't afraid to drop their altos an octave. There are also actual, appropriate, acoustically satisfying, and alliteration-inspiring snares! Not to mention cymbals with a realistic decay that don't sound like a leaky balloon. Christine Piché, Natalie Newman, Alexandra Apostolou, Virgina Galvez...you are my heroes. You have shown the world that it is fine for girls for to rock the mic and spit on it too. (I'm so glad I can get away with a comment like that on an a cappella site.)

The energy of this disc blows me away too. I found myself drumming along with every track and I only drum with songs that get me moving. So there.

Simple, standard syllables reign supreme on a significant sum of the Sigs' songs. (Get the point?) They rarely go beyond "din", "doo", and "ba" but they use them to create lush and intricate textures to support the solos.

Alright, that's enough quotable stuff to put up on their website. Don't get me wrong, just because the Sigs rock doesn't mean there isn't stuff to work on. The arrangers are very talented at creating simple and catchy ostinatos that are the building blocks of their high-energy covers. Nevertheless, while they are very good at creating energetic textures, the constant use of those textures dulls the overall effect.

If they were to harness that creative ability and use it on JUST the sweet spots, then the effect would be that much more

I know that they know how to cultivate a verse into a passionate chorus by shaping their vowels and dynamics. Pitch Black would have been much better served if those great layers and textures were saved for the climax of the song and not released in the first chorus. (Why is it that this has become my most consistent comment in reviews?) It seems as though My Immortal is unfortunately the only example of proper use of "holding back". If they were to harness that creative ability and use it on JUST the sweet spots, then the effect would be that much more powerful.

I have to mention this one background line in Amsterdam. It's a very high "yi yi yi yi yi yi yi" that made me look for my phone every time I heard it. It reminded me a Smurf's war cry as they rush into battle against Gargamel. There is a similar situation in Cowboy Take Me Away where some girls are singing a riff that is too high in their voices and it ends up sounding strained and shrill.

While Pitch Black has tinges of grey in it, it's still pretty darn dark and is a good reminder that female a cappella can make you pick up your jaw and reattach your face.