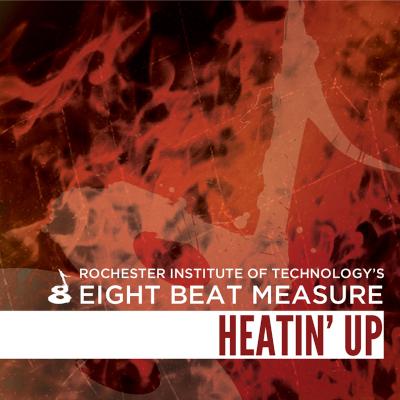 It could be said that I mocked Eight Beat Measure for their last album title, No Safety Nets, so let me be quick to note that their latest album, Heatin' Up, is aptly named.

Yes, the reliance on giants of a cappella post-production is a fixture once again — and expanded to feature an even larger roster of talent, including Bill Hare, Ed Boyer, Tom Anderson, Robert Dietz, James Gammon, Tat Tong, Dave Sperandio, Christopher Diaz, John Martin and the team at Sled Dog Studios. This time around, however, there is a bit more substance to the arrangements and the performances with which these pros work their wizardry, and the result is therefore a definite step up from Eight Beat Measure's prior efforts. Sure, it's still a bit mechanical and sterile-sounding at times, and there are a fair amount of songs that aren't all that interesting to begin with, let alone in the somewhat slavishly transcriptive treatments they receive. But Heatin' Up is definitely a notch above the group's prior work in terms of complexity and entertainment/enjoyment value.

How and why is it specifically different? To my ear, credit is due in two areas: arranger Rohit Crasta and the various arrangement editors who were enlisted for nine of the CD's thirteen cuts. The dominant arranger from No Safety Nets, Bradley Turnbull, also returns here for five tracks. With one very notable exception (and the sole one of his for which an editor was employed) you can really hear that Crasta is playing with a more expansive toolbox in his use of rhythms, layering and textures, whereas Turnbull's work seems to consistently devolve into plodding rhythms with few surprises and minimal intensity. The scores above bear that out to some extent, though it should be noted that my absolute favorite from this album — It Had Better Be Tonight — is the work of Mr. Turnbull.

Regarding arrangement editors: I'm unsure how many collegiate groups are availing themselves of this option, but it's a brilliant choice by Eight Beat Measure, and I'd recommend more groups consider following suit. No doubt it's cheaper than ordering custom arrangements from scratch, but it offers a chance for constructive input in an area which is often one of the weakest for scholastic ensembles. Of course, it's impossible for the consumer (and reviewer!) to know how much of the finished product is arranger vs. editor. But among the many places on this album where I "hear them", many of the jazzy surprises peppered throughout Carry Out suggest the editing hand of Tom Anderson, just as the smart sensibilities of Robert Dietz seem evident in the the lovely layering and texturing of the verses of Just Say Yes against the expansiveness of the choruses.

In addition to continuing to work toward a more equal balance between quality arrangements and post-production magic, one other area where Eight Beat Measure might do well with some closer self-examination is the use of dynamics — or lack thereof. Much to my chagrin, the importance and nuances of dynamics seem to be a disappearing priority, especially in collegiate a cappella, and it's just an awful musical choice to make. I imagine that the need for extensive compression may have something to do with it, but it's just not an acceptable excuse. Too many of these songs start at one volume and just stay there — no build, no ebb and flow, nothing. Indeed, because they start so bright and loud, there's nowhere to go, and by the end it's just yelling. Please — I beg you — fix this.

With that said, it's always very satisfying to see real, meaningful progress in a collegiate group, and I can only hope that even with graduations (Crasta was class of '13) Eight Beat Measure manages to sustain and build on the success they've achieved to date. If they can, I guess we'll be looking at a new album sometime in the next year or two called "On Fire".

If you're in the market for a new upbeat a cappella album with better and more interesting song choices, arrangements, and production than most, Eight Beat Measure's got you covered.

I gotta say, I'm impressed with the track list. This group has incredible range. 8 Beat opens with a delightful cover of the electronic pop song Party Rock Anthem, follows it with a stirring rendition of Just Say Yes, and later tackles It Had Better Be Tonight, a samba by Henry Mancini and Johnny Mercer. There are a few tracks I'm not crazy about, but they're not bad. 8 Beat covers so many genres and styles that you probably won't dig every track, but I found a lot to love on this album.

8 Beat was smart to invest in professional arrangement editing. Groups want to record their own arrangements, but most collegiate arrangers have no prior experience arranging for a studio recording. The effect that editing had is obvious. Tat Tong, Rob Dietz, Tom Anderson, Christopher Diaz, and Bill Hare give these arrangements a level of polish that I've never heard before from a collegiate group. Parts are clear and effective, and the arrangements never get in the way of the singing. Everything just works.

The biggest problems are all problems with the original versions of the songs. The Cave is as mediocre as ever. Tears in Heaven is beautiful, but every time they pronounce heaven as "heav-on", I wince. I'm sure the soloist never pronounced that word that way before imitating Eric Clapton. And in Unnatural Selection, an aesthetic choice was made to play the solo at a very low sample rate. The Muse original also does this, but that doesn't change the fact that the solo just sounds bad.

I strongly encourage you to give this album a listen. While none of the tracks stand out as brilliant or must-listens, I really enjoyed my time with this album.

I will go ahead and get the extremely obvious out of the way: this album is good...really good. What helps to validate this point are four CARA nominations, one BOCA selection, and a production and editing team involving some of the biggest names in the industry. The gentlemen of Eight Beat Measure have indeed given the aca-world something worthwhile with Heatin' Up. At the end of the day, my concerns are just a question of preference.

Heatin' Up has a strong foundation; this is why the album is good. At the core of top-notch production, diverse song selections, and a solid group sound lie full arrangements that can hold a listener's attention. Rohit Crasta and Bradley Turnbull are the two minds behind twelve of the thirteen tracks. (One track is co-authored with Brian Clanton, and one track arranged by Christopher Diaz.) The liner notes list plenty of big names who had a hand in editing most of the arrangements, but I will say that the initial conceptions have to be the work of two very talented musicians.

Opening the album with Party Rock Anthem was indeed a smart choice. The LMFAO party hit is full of natural energy which lends itself nicely to an all-male group such as 8 Beat. Some of the effects on the track are a bit much for my personal taste, but a featured spot on BOCA 2013 is easily warranted.

The rest of the album is full of selections that well represent the sound of 8 Beat and are not your generic, predictable choices. Sarah Smiles, A Dios le Pido, and Lego House are three tracks that really stand out. Each possesses the signature energy and style that 8 Beat has developed on this album and helps to drive rhythm and feeling in the right direction. The Cave is by far the most innovative track, as 8 Beat has managed to breathe life into an otherwise tame song. My only issue with this song is the syllables used for the higher voices; they tend to be distracting at times.

I Will Follow You into the Dark wins the award for my favorite track. Jack Kelleher delivers a very honest solo interpretation, with much conviction and emotion. In addition, an impressive arrangement and contrasting dynamics really sell the song. Well done, gentlemen.

I would change very little with Heatin' Up. There are times when the energy seems a bit mechanical, as if it were the result of production work versus natural vocal intensity. This is most noticeable during Just Say Yes. Other times, some of the production work feels imbalanced; such is the case between Unnatural Selections and It Had Better Be Tonight. And then there are moments — very few, like Confessions — that just had me desiring more from the arrangement. But as I said, these are all issues based on preference.

Heatin' Up is definitely award-worthy when looking at the complete package and will easily have you returning for another listen.