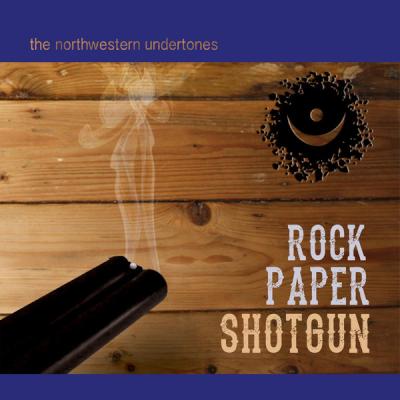 The Undertones have a reputation for a musical theatre sound. That's no wonder given Northwestern Univerity's well-known Musical Theatre program. But as musical theatre itself has become influenced by contemporary pop rock and hip hop, so have the Undertones adapted their sound. Live shows may benefit from over-the-top theatricality, but the choice to go small serves the 'Tones especially well in the realm of recording.

rock paper shotgun starts off with the Undertones' best track, Plain Gold Ring. Sexy, mysterious and full-bodied, this sound is immediately arresting. Each track that follows walks a fine line between very good and just cresting into excellence. Often a great lead, like tenor Zach Piser, can push scores up, while some other aspect, like an inartful choice in arranging, say the last chord of After the Rain Has Fallen, will pull things back down. It's a balance.

Home's arranging shows unbounded imagination. Half Acre's lead, Royer Bockus, will wow. The spoken lines in Gunpowder & Lead are funny every time. And Laura Winters rap in Party will have you stomping with joy. The production in Plain Gold Ring is a perfect blend of space and specials. Even the composers' credits are handled with grace and professionalism. There really is so much to enjoy here.

The arranging does get a bit syllabic at times. That choice can work better live, where diction provides percussive energy, than on recordings, where the enhanced vp easily provides the beat and where diction on nonsense syllables can only distract. And in conjunction with the arranging, the production occasionally allows the bass energies to dominate songs. When the bass is enhanced to octave-dropped, hip hop levels, the arranging desperately requires space. When the bass is both enhanced and active, all that power just dominates the other more subtle arranging choices creating an effect that is more tiring than impressive.

One of my favorite things about working under the RARB umbrella is the ability to take a second look at groups when the opportunity arises. I wasn't completely sold on The Undertones' previous effort, Boots and Cats, so I was curious to see how rock paper shotgun would compare.

So this gives me the opportunity to examine what The Undertones changed in their approach. I don't want to give the impression that Boots and Cats wasn't any good (in fact, my two colleagues were considerably more positive about it), but I did find it overstuffed and excessive. I wouldn't say that rock paper shotgun is pared down compared to Boots and Cats, but it's way more focused. Gone are the flurries of overbearing syllables, the grating brightness, and the standard repertoire choices — rock paper shotgun really shows The Undertones at their strongest.

The Undertones have put their heart and soul into this album. Despite there being heavy studio manipulation present, it never detracts from the vocal aspect. The soloists are uniformly strong, with occasional excellent standouts. What I appreciated the most was the soloists just giving it 100%, leading to chilling moments: the climax of Plain Gold Ring, the country twang of Gunpowder & Lead, and the soulful interpretation of Home.

Strong production, good soloists, beautiful blend, terrific arrangements ... it's hard to find much to nitpick here. World Spins Madly On isn't the strongest song to end the album, as it's a bit of a middle of the road moment; I felt like the album would have been better served by ending with either a strong barnburner or one of the album's solid ballads. Some songs (Keep It Loose, Keep It Tight and I'll Be Waiting) seem dispirited compared to some of the magnificent uptempo numbers on the album. The vocal bass also became an annoyance from time to time, with the vocalists punching the syllables too hard instead of embracing a sound closer to an actual electric bass.

But these are minor nitpicks, stuff I wouldn't even mention on a weaker album. rock paper shotgun is a marvelous effort, and with this recording it's safe to say that The Undertones have secured their place in the upper echelons of contemporary collegiate a cappella.

The Undertones' 2013 installment is a well balanced and fun album for the 'folksy-blues' person in all of us. Its title rock paper shotgun is a fitting one for its well executed theme of edgy foot-tappers and quiet reflective tunes.

I really appreciate this album's bass lines. This is due in part not only to the solid production but also to the technique of the lower singers. The lower voices do a great job of creating a solid wall of sound that captures much of the warmth in several of the songs; this plays a key role in communicating the appropriate mood meant to be interpreted by the listener. A great example of this is on the Amos Lee tune Keep It Loose, Keep It Tight.

Some of the most instantly likable songs off rock paper shotgun are, Safe & Sound, Gunpowder & Lead and Bluebird. I really enjoy the arrangement of Plain Gold Ring, particularly with its solid blending and execution of the backing vocals. The soloist has the right darker, low jazzy quality meant for the song. I didn't always agree with her stylistic decisions (a bit shouty and over the top at times), but I appreciate her attempt to interpret the song as opposed to Xeroxing the performance of a particular artist.

I don't care too much for the Undertones' rendition of Party. The squeaky clean enunciation of the words and certain syllables clash with the song's naturally smooth vibe. The insertion of the Chris Brown verse from the popular 2011 hit Look At Me Now is a cool idea, but the poor execution makes it feel awkward and disruptive to the track's flow.

All in all though, rock paper shotgun is great fun and a worthy pickup for lovers of folk, country and soul.