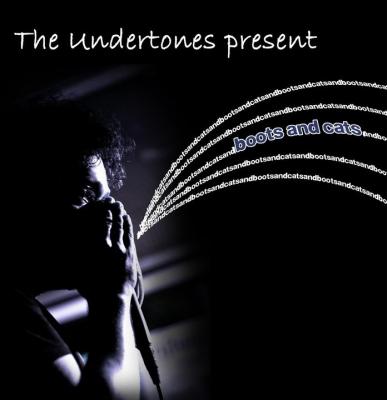 To shifting degrees, the Undertones infuse a distinct streak of musical theatre-rock to its performances. Surely a song choice like Rock Star makes that inevitable. But it's something beyond song choice. The leads' phrasing, diction, and even tone color have that certain bright Glee/Rent/out-stretched-arms quality. You can just tell that these singers can fill the room and sing to the last person in the last row. The plus side of this theatricality is that the entire album is sung with excellent energy. The negative side: strong theatricality can hinder intimacy.

But intimacy isn't everything, and the Undertones offer plenty in its place.

The Undertones are miles better than most collegiate groups in arranging choices. Moments on I Don't Wanna Be in Love (Dance Floor Anthem), Eet, and Before the Worst stand out for the arrangers' willingness to add their own voice the song's artistry. Most collegiate groups will find these arrangements a learning tool — both for creativity and for carrying the collegiate sound into the studio.

For emotional effectiveness, a few more aligned vowels and a few less emphatically sung nonsense syllables would have propelled the Undertones' sound even further. As with many collegiate tracks, the listener is asked to accept what would otherwise be a silly nonsense word as non-distracting, and despite its prevalence in the genre, the reality check is that that's not always easy to do.

The production on Boots and Cats is excellent, with a resulting wall of sound in full force. The drum programming is highly enjoyable, with effective samples and surprisingly musical playing. Effects, from gentle reverb to heavy distortion, are used very tastefully throughout, just what you want from your producer.

The ugly stepsister track is the live track, How Can Ye Go, Lassie?, which is beautifully phrased, but displays poor recording quality, noticeably troubled intonation, balance issues. Overall it should have been a website-only release, as it fails to match anything else on the album.

Boots and Cats has much to offer listeners. And if you happen to like your pop-rock with an extra helping of theatre, and you can get down with the world of big back-up syllables, then the Undertones latest just may rise to the realm of the must-own.

Wow. I can barely believe that this is the same Undertones from Enter Sound. What a phenomenal improvement! Enter Sound was all brains and no heart — too scattered and lacking in vision. The group has pulled a 180 with Boots and Cats, showcasing a refined, focused, energetic recording full of musical surprises. It's an incredible achievement, and one I hope the group is proud of!

The arrangements on this album are really great, and are on par with some of the best I've heard from the collegiate community. I have one question: who is Matt Kania, and why didn't he arrange more of this album?! His take on Regina Spektor's Eet is well textured, well paced, and innovative. The cascade entrance at :43 is inspired, and one of the only moments on anything I've reviewed in recent memory that I immediately re-listened to multiple times. It was too cool — I just had to know what was happening! Why this is the only track he arranged is a mystery to me.

The other arrangers take some great chances as well. Matthew Deitchman's intro to Ben Folds' Fred Jones, Part 2 shows restraint, delaying the familiar piano riff until the second verse and replacing it with appropriately uneasy-sounding dense chords. I have mixed feelings on Matt Edmonds' chorally tinged I Will Follow You Into the Dark (it's a little more in-your-face than the Death Cab original), but I applaud him for having a clear vision for a different take on the song, and for executing it well. And you know what? In the face of the bordering-on-cheesy aesthetic, I hear genuineness in the group's singing. The approach is very different, but the arrangement somehow lets this group communicate the same message in its own way. That's great arranging, folks.

Of course, great arranging means little without great performances to back it up. The Undertones go for a spunky sound here, one bubbling with energy, and at times even genuine emotion. It comes off a little cutesy at times, but it's a huge improvement over the group's previous work. In the final analysis I found it more endearing than annoying.

As is often the case on albums that include them, the hidden track adds nothing to the overall experience of the record. The group's live recording of How Can Ye Go, Lassie? is pretty pitchy (especially following such well-polished material), and doesn't fit particularly well with the rest of the music here. Did it ruin the album for me? Not at all, but Boots and Cats proves that this group is ready to take the leap into recording greatness. Bad hidden tracks are a rooky mistake, and it's the only one this group has made here.

I would be remiss if I didn't give a quick shout out to Ben Lieberman and the fine folks at Liquid 5th for their excellent production work. Their touch is a major part of what unifies this album and makes it such a giant step up from its predecessor. Nicely done, fellows.

So where can the Undertones go from here? I'd like to hear even more contrast between the bounciness of their upbeat songs, and the sweetness of their ballads. If they can banish cutesy from their recorded sound entirely then their vibe will be even more professional. That's for next time; at present I again congratulate the group on a job well done. This is an album well worth owning.

College a cappella has gravitated towards being too busy; as it moved away from its barbershop and glee club past, collegiate a cappella arrangements ballooned with the new influence of maximalism. While the scope of such groups as the Tufts Beezlebubs stand out, not every group benefits from the "bigger is better" philosophy. The Undertones, a mixed collegiate group from Northwestern University, could stand to pare everything down a bit.

Almost every arrangement is a flurry of overlapping syllables, stratospheric sopranos, large dissonant clusters, and layered vocal percussion. Soloists struggle to assert themselves over the din, with mixed success. I don't fault the production here — there's so much going on at all times, to mix it all in audibly puts huge pressure on the soloist to deliver a bravura performance. The arrangements are never horrid; in fact group member Matt Edmonds shows high caliber musicality with his arrangements, but more balance between simple and complex moments would help the group reach the next level. The arrangement that achieves this balance the best is the understated, but still dramatic, cover of Death Cab for Cutie's I Will Follow You Into the Dark.

The production, by Ben Lieberman and Carl Taylor of Liquid 5th Productions (with additional engineering by Chris Juengel), shows off the studio. The album is mixed and mastered with expertise, but the end product isn't a wholly pleasant listen. The opening track, Suspension, explodes right out of the gate with an almost unbearable brightness. The album has mellower moments, but overall it gets in your face and never really leaves. I don't know if this is the group sound or not, though the single live track showcases a darker, more choral sound. It's very possible the brightness is a combination of the arrangements, the group sound, and the production. Regardless, the overbearing sound is a major mark against the success of the album.

Song choice is interesting. A lot of standard collegiate fare (Regina Spektor, Good Charlotte, and Death Cab) mixed in with some surprises (Carole King and Hannah Montana). I've gotta say, I was dreading the cover of Rock Star, but the Undertones really did rise to the occasion. Soloist Brittany Bookbinder captures the sugary vocal performance of the esteemed Ms. Montana perfectly, and the entire song is infused with an infectious and earnest cheeriness. The inclusion of the live track at the end is perhaps a preemptive strike against complaints of the album for being over-processed and robotic. How Can Ye Go, Lassie?, a beautiful folk song, does showcase the "warts and all" approach: there are numerous tuning issues and the group isn't 100% together. However, the incredible warmth of the men's sound and the earnestness of the performance shows why it was included on the album.

Boots and Cats could have been a much better album. Bigger is not always better, and this Northwestern University group could really benefit from a simpler approach to a cappella. The human voice has the ability to capture thousands of subtleties in a single note, you don't need gigantic arrangements and loads of studio processing to create a great recording. I'm sure friends and family will be wowed by the vocal power that went into Boots and Cats, but the entire album does not stand up as being a great achievement.

To order this album, visit the iTunes store.