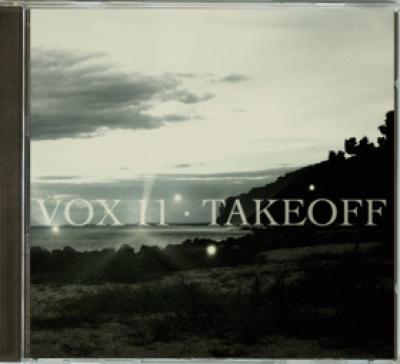 Take Off from Vox 11 is a study in contrasts. Modern American R&B tracks sit next to Nordic soundscapes. While this Danish group’s ability to sing such diverse styles of music is impressive, the album never really gels.

When I review, I usually have a single listen-through before reading anything about the group. Take Off begins with the song Thank You by Boyz II Men, and it sounds quite authentic: a little gritty, a slick groove, some nice attitude in the leads, and an almost complete lack of accent. I assumed I was listening to an American group. Then the second track, the original Solskin, cued up with its giveaway Nordic sound, and I was perplexed. Could the same group have sung both tracks?

With the ability to switch seamlessly between such disparate genres, it should come as no surprise that Vox 11 has a very professional sound. Tuning, blend, diction, and harmony are nearly perfect. The group moves amazingly well in-sync. This is radio-ready material, with no apparent flaws.

Yet the music is never truly moving. The mastering, where volume levels rarely vary from a low-level baseline, fills the speakers with an anemic sound that washes over the listener rather than really commanding attention. The low men are mixed so low that they are difficult to hear. While relatively large for a professional vocal ensemble (there are fourteen musicians featured on the disc), they make poor use of their numbers by featuring neither a full sound nor complex arrangements needing more than a few parts. In sum, Vox 11’s sound feels underdeveloped.

I thought that after a few listens, I would get used to the jarring transitions between seemingly unrelated genres (Danish folk tales, Alicia Keys, The Real Group, Dave Matthews, etc). Yet even after repeated attempts, the album never made sense to me. Perhaps in Denmark such pairings prove popular, but I just found it strange.

Vox 11 has a great base of talent to build from, with some great singers, some decent arrangers, and the ability to sing a wide variety of styles. If they expand their emotional palette while focusing on making a more coherent album, I can see their next release being superb.

To quote their website, "Vox 11's repertoire is modern a cappella music, containing elements from jazz, hiphop, pop/rock and world music." That's a lot to take on, but I'm happy to report that the result is better than you might think. In fact, by being so eclectic on their latest album Take Off Vox 11 achieves something pretty impressive: a measure of originality not often heard from their American collegiate counterparts.

Very good arrangements and all around convincing delivery come together on this album to create a very cohesive and engaging whole. Before Take Off I never would have thought that the Boyz II Men classic Thank You could fit so well alongside a Danish folk song. In fact, as solid as the R&B tracks here are, I actually enjoyed some of the folksongs and world music even more because of the creative soundscapes and the rich tone of the ensemble. It's a very authentic and enjoyable sound.

Only two things stood out to me that could use a little work for next time. First, though it was certainly not a weak track, I would have chosen to open the album with something more exciting than Thank You. Leading off with one of the more engaging songs would have drawn me into the album sooner. Second, I felt that the vocal percussion could have used a little bit of assistance in the studio to give it a little more bite and presence. I noticed it especially on Jane Doe. I know there's some beatboxing in the original tune, but Vox 11's interpretation sounded too human to me, even for the style. I wanted something more authentic that I could groove to.

I applaud Vox 11 for coming out with an album that is equally rich in diversity and musicality. Their style, while wide ranging, is ultimately well defined and well presented on this recording. If you're a fan of both world music and contemporary R&B, Vox 11 has plenty for you to enjoy.

Vox 11, the fourteen member ensemble from Herning, Denmark can sing the daylights off the sun. As they ably demonstrate on Take Off, they are able to take on a wide variety of genres. My only wish is that their tastes weren't so eclectic, if that is the word to describe the variety on the album.

Listening to a group of Vox 11's caliber tackle Thank You, the nadir of auto-pilot mid-90s hip-pop, is like navigating a Porsche Carrera through rush hour traffic. Compared to the astonishing depth and beauty of the two tracks that follow (both originals, to varying degrees), one wonders why Boyz II Men got the call to kick off the album. What could these a cappella singers do to add to a track that already represents a middling example of the genre?

Not much. That said, you'd still rather be driving a Carrera when the occasional stretch of unadulterated highway presents itself. Vox 11 offers up yet another example of the rich vocal sound that seems to run in the highways of northern Europe. Take Solskin, the first of the aforementioned originals. The intricate dialogue between the sullen bass lines and the playful sopranos adorns a lush melodic quilt of perfect blend and dynamic sensitivity. Few groups could pull this off, and the result is simply gorgeous.

Of course, Vox 11 has no difficulty executing the simpler R&B numbers. Jane Doe features an Alicia Keys doppelganger so convincing I had to check to see if Alicia Keys is really just the stage name for Lene Kallestrup Kobbelgard (it is not). The track is also bolstered by intuitive and unobtrusive vocal percussion that plays off a relatively complicated arrangement.

Almost everything on this album conveys class and attention to detail. The cover art is exquisite, the group looks great, and the liner notes are accurate and helpful (no easy task given the language barrier). The production makes ample use of the group's dense sound without turning Take Off into a mélange of auto-tuned saccharine. I find myself baffled, then, by the inclusion of a hidden track, ostensibly a Danish rap, which devolves into momma jokes and fart noises.

It is worth noting that Take Off's concluding track (the Peter Gabriel track, not the hidden one) represents a textbook example of how to incorporate accompaniment into an "a cappella" arrangement. The arrangement tackles the droning 4/4 time by utilizing a soft, if insistent, piano line tapping gently behind Vox 11's wall of sound.

If I were to nitpick, I might ask for a little more whimsy from the Dave Matthews Band cover. However, I'm not sure I'd trade that masterpiece of a key change for anything else the group could offer. The middle section of the album could benefit from a bit of buoyancy generally, and I might do away with the tired practice of emulating atmospheric phenomena (e.g., wind and thunder) .

And, if I were to nitpick beyond all reason, I might point to an apparent electro-hiccup in the opening descending line of The Promise. That the Randi Laubek cover remains the standout track on the album is a testament to what this album accomplishes.

But enough. Vox 11 has done more than enough here to merit an audience for their work. You perform a mutual favor by granting it. In the future, I would encourage Vox 11 to set a course on more ambitious highways.