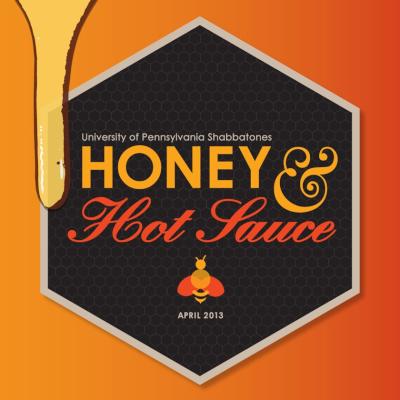 The U. Penn Shabbatones are set apart by their genre, weaving Hebrew and English material together on Honey & Hot Sauce. That combination of two worlds is a theme shared by other college groups performing similarly niche material. And it comes with a bit of a free pass: greater flexibility in programming. Though a critic might wonder why religious material like Ivdu found its way onto the same album as Stayin' Alive, most listeners don't speak Hebrew and won't question the choice.

What you can't get a free pass on is musicality. The Shabbatones latest is certainly pleasant, but a lack of moments ultimately restricts its impact. All the notes are fine, but phrasing and dynamics, especially in the backs, are pretty much on auto. And even when they aren't, the arrangements are just so universally busy that focus gets lost. Listeners just can't care about "joh doh". If your pronunciation, mix and arrangement bring nonsense to the forefront, you're kind of singing for yourself.

Thankfully, the Shabbatones' leads add as much heart as they can back into the sound. Almost all of the women bring out the heartbreak that makes up much of the material. But standout Rachel Klein, who first catches our ear on King of Anything will win over any holdouts with her intricate, uplifting delivery on Put Your Records On.

The liner notes are one part disappointment, but also one part exemplary. On the negative side, the composers and lyricists are only sporadically credited, even in cases where a simple wiki search would have revealed the missing info. On the positive side, the non-English song summaries are extremely well-written, and a perfect example of how groups should handle the challenge of keeping English-speaking listeners in the loop with foreign material. This is especially true since reprinting translations of foreign copyrighted lyrics is illegal. It may be odd praise, but this element of the liner notes is easily one of the best I've seen in decades of reviewing. Big kudos.

Existing fans will enjoy this cleanly recorded release, but Honey & Hot Sauce isn't likely to win over the as yet unconverted.

It may be time to revisit our definition of "average". Once upon a time in the a cappella world, having an album that was in tune and sounded polished was something that very few groups could afford to achieve. Over time, recording technology progressed and became more accessible, so good pitch has become much more commonplace, even among collegiate groups with a limited budget.

Unfortunately, the Penn Shabbatones fall far short of the mark on Honey & Hot Sauce. These singers sound in tune, but we as listeners need (and deserve) more than that. This is a group that sings mostly non-English songs, and that requires even more of an effort from singers to convey meaning to listeners who do not understand the lyrics. Conveniently, the group put translation summaries in its liner notes; these were interesting to read, but certainly drove home the issue with these performances. Some of these songs are religious praise songs, some are breakup numbers, and others are mournful. And yet they all sound the same to my ears. There is no passion, no heart, and no connection with the song (or with listeners).

A lot of this could be changed with dynamics, which the Shabbatones lack. Sure, there are some subtle variations here and there, but a range of 6.8 to 7.2 on a 10-point scale doesn't take advantage of the full spectrum of the human voice, which can help deliver a song's message and keep a listener engaged (especially for a song in a foreign language). The soloists' flat tone is problematic, but what often makes these songs difficult to listen to is the tone of the backs. Some phrasing arcs could help here; as it stands now, every note at the same volume and tone makes for a song that is difficult to digest.

This doesn't work well on the English language songs (which, incidentally are sprinkled throughout the tracklist, making the album feel disjointed and choppy). Fine By Me and Stayin' Alive both sound totally joyless. That shouldn't be possible — the first is a bouncy, breezy love song and the latter is a hip-shaking disco tune. These songs both have so much energy in their original versions, and yet they sound totally lifeless here.

One of the few remarkable songs here is Yom Zeh Leyisrael. It suffers from many of the problems of the other tracks (a few phrasing dynamics could have worked wonders), but it's interesting to note that group member Michael Gevaryahu composed the melody to these traditional Sabbath lyrics.

And so, by the end of Honey & Hot Sauce, every song begins to sound the same. The melodies are different, of course, but the singers sing every song the same, giving each song the same tone and therefore making it all sound a bit monotonous.

With the release of Honey & Hot Sauce, the Shabbatones of the University of Pennsylvania follow in the footsteps of their previous release, Shabbaholics. This is an energetic and diverse album of contemporary and sacred Hebrew music like Ratziti and Ivdu interspersed with English pop music like Put Your Records On and Fine By Me. Can pure, raw energy sustain Honey & Hot Sauce?

The arrangements on Honey & Hot Sauce are innovative for the most part, with the exception of a few bothersome syllable choices. They are refined and creative while not detracting from the soloist. The Shabbatones' soloists are the group's greatest strength. While a majority of the lyrics are in Hebrew (song summaries are provided), it is never difficult to surmise what the soloists are singing about because they each sing with such confidence and emotion.

Like so many other hybrid-language groups though, the Shabbatones sound more compelling with their Hebrew repertoire than they do with contemporary English pop songs. Tracks like King of Anything and Fine By Me suffer when compared with their preceding tracks, Lo Hispakti Lomar and Ma'or Einai, respectively. The juxtaposition between several tracks is also staggering. Yom Zeh Leyisrael, a traditional Sabbath hymn, thanking God for creating the Sabbath as a day of rest is immediately followed by the Bee Gees' 1977 disco classic, Stayin' Alive. And the inclusion of a musical quote from the 1996 classic I Believe I Can Fly by R. Kelly on La'uf is almost humorous, detracting from a seamingly flawless solo by Andrew Brown.

With editing by Rachel Klein, Lior Melnick, and Jeremy Pincus and production by Studio Crash, the album tends to feel aberrant at times. You can hear that most of the album was meticulously edited to the grid, destroying a majority of the natural feel. In addition, many of the tracks have a poor sense of arc and structure and therefore won't lead the listeners' ears forward, leaving them to struggle through a turbulent ocean of over-tuned diatonic wash.

In order to rise from "good" to "great", the Shabbatones will need to harness their palpable energy for their next release.

This album can be ordered directly from the group's web page and is also available on iTunes, Amazon, and Spotify.