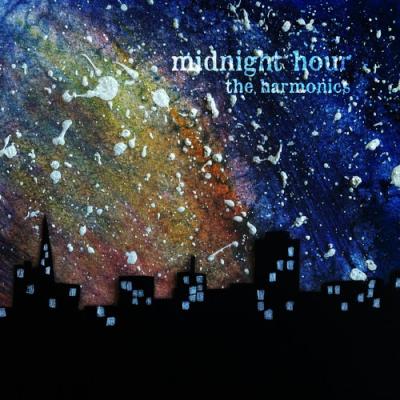 The fifth song on Midnight Hour is a hair-metal anthem by Slash's Snakepit, a band that was either a supergroup or a spinoff depending on how long you wanted to prolong the moment. The Stanford Harmonics seem to have resurrected it, imbuing a hair-metal sound wall under about half the tracks on this new album. Strangely, the vibe gives new life to tracks like Mad World, that Tears for Fears angst anthem made treacly emo in the Gary Jules cover. On harder-rocking numbers like Slip to the Void, the vibe sounds like it's been there all along.

A cappella cannot thrive on guitar-rockers alone, and fortunately Midnight Hour has much to offer. Kids is the album's standout track, carried by an impossibly clean trio to distractingly lovely heights. Ben Lauing's arrangement moves seamlessly between the full group and the three lead voices. The trio get the tone and blend exactly right, the throaty alto and baritenor merging wonderfully with a pure but not cloying soprano. Even the percussion sounds organic. Wonderful track, worth listening to again and again.

I found Madness quite compelling — whatever computer they used for that bubbly bass effect seems to have been handled with inspiration and care, and overall the whole song has a refreshing space inside it. Kings and Queens is probably my other favorite, largely on the strength of Sean Tannehill's solo. Farther down my set list, Somebody to Love mostly nails it, though I could have used a little more grit, a little more digging in, and House of the Rising Sun is an engaging take on an old favorite. Middle of the album, things get a little blurry, a little less interesting. Lonely Boy might have been stronger if the solo had been brighter, more clearly set apart in the mix. As it is, tracks six through eight run together, not offering anything to pique my interest.

At times the Harmonics sound like they're trying to sound even younger than they are, with bright, nasal women's vocals setting the tone on tracks like Call Me When You're Sober. Other times, the sound is more natural, less cloying. This album seems to have been the product of many years' work — I'd bear that in mind for the next one and try to weed out some of the more childish vocal colors. I also wouldn't mind a bit more detail in the liner notes. The credits list two years' worth of Harmonics, but some of the tracks seem to feature singers and arrangers from before; it would be nice to have it all explained vs trying to puzzle. Then again, in the download age there are probably fewer and fewer people reading the liner notes anyway.

Midnight Hour doesn't include any covers of Midnight Hour but it's still a strong disc. Alt-rock-a cappella lovers can buy it with a clear conscience and listen to their heart's content.

Midnight Hour is another give 'em hell release from the Stanford Harmonics. Apparent group motto: sing louder, blend tighter, make their heads spin from the vocal fireworks and drama! It's all so easy to love.

Lots of a cappella albums get specialized statements to help our readers understand what's for sale. Like, "This is an album to relax to in the evenings." Or, "This upbeat album is perfect for long car rides." With the Harmonics, it's always a little more complex and run-on sentence-ish. Maybe: "Midnight Hour demonstrates how far one can push the ensemble sound while still sounding controlled, that also uniquely showcases the talents of a mixer (Bill Hare) who's been a friend to the group for its long history of accolades, and also peacocks the hottest collegiate soloists and arrangers in explosive tracks that'll create the reference for the Best of the Year highlights for many award and compilation organizations." If you permit "peacocks" as a verb, I stand behind this run-on sentence.

The packed details on Midnight Hour's track list make for many highlights, but it's the harder, the louder, the harder + louder that make such a crater of an impact. The tribal-esque, organic drums matched with a thick atmosphere featuring double the amount of independent voice parts you'd expect make Somebody to Love perfection. This may be the primer for how to open your next album. Kings and Queens: so loud, so glorious. The section from 3:44 — 4:04 on Madness is sweet medicine for the a cappella soul. Those brave "ahh-ahh-ahh!" choruses on Beggars and Hangers-On that could spin into catastrophe for a lesser group sound so right here. The chilling, incredibly bold arrangement choices behind Kids (arr. Ben Lauing) and the sensitive, purposeful singing that results to carry the mood are unforgettable. Then, there's the task of taping my stereo together before I play House of the Rising Sun because the fullness causes it to burst. But my favorite aspect of the entire fanfare that is Midnight Hour is soloist Amy DuBose (Somebody to Love, Madness, House of the Rising Sun). The way she just patiently and effortlessly sits on those long tension-notes, cutting through everyone else with her color and vibrancy is unreal. Get her a medal.

There are many similarities between Midnight Hour and the latest release from Purple Haze, Shed. If you're a PH fan, you should be a SH fan too, and vice versa. It's all so delicious, though I must say, one fat bonus point goes to PH for their sophisticated thematic programming of Shed. If the Harmonics want to get behind such an approach, we'd all be the lucky recipients.

So yes, Midnight Hour is a clear victory for the Harmonics and an album you'll probably hang on to forever.

The Harmonics of Stanford University are a powerhouse vocal rock group that breaks away from the norm and offers listeners something truly unique. A complete and utter ROCKFEST. Midnight Hour is jam-packed with rock tracks from beginning to end. Sorry, not a single pop song in sight. The quality of the Harmonics' work is indeed top-notch; however, there are a few hits and misses such as an imbalance in strong leads and establishing a connection with the audience.

The Harmonics seem the most comfortable when they are producing in-your-face rock songs, and most of the tracks fit this description. Kings and Queens maintains a great deal of energy throughout, backed by both a strong lead and a full and interesting arrangement. It's easily one of the more standout songs on the album.

Mad World is also another notable track. While the intensity of the song is nowhere near the same level as the other songs, the Harmonics offer a fresh take on the arrangement. The build up to the end is dynamically great and ladened with a great deal of vocal effects. The group is impressive in that it's able to breathe a very strong rock energy into most songs on Midnight Hour.

House of the Rising Sun is stellar. Chris Goetz, who also penned three other arrangements, did a superb job with this arrangement, making it so much more than a folk-rock song. The track is filled with a steady build until it abruptly goes from zero-to-sixty in a second with vocal awesomeness. All of the voice parts do a great job, but the higher voices (mainly the sopranos) deserve a great deal of recognition as their part grabs hold of your attention and never lets go. Great arranging indeed!

A major highlight of Midnight Hour is the production quality throughout. Major effects are noticeable in almost every song, taking the group's sound to another level that normally leads to the age old question "when is it too much?" Somehow, the great deal of effects works for the Harmonics, probably due to their inventive arranging. Their take on Madness (originally by Muse) is a perfect example for this topic.

Midnight Hour is good but overall I wish there existed more of a connection to the listener. Often times, emotive singing draws the audience in and does the trick. I believe that since there are so many high energy rock songs, there becomes an element of restraint that is missing, keeping us from seeing another side of the Harmonics. This along with some soloists not delivering their leads as strongly as others proved to be minor flaws for the album.

All things considered, Midnight Hour is good. I can assure you that you won't find another collegiate group producing rock hits the way the Harmonics do.

Midnight Hour is available for download on iTunes or Loudr. For physical copies, visit the Harmonics' online store.