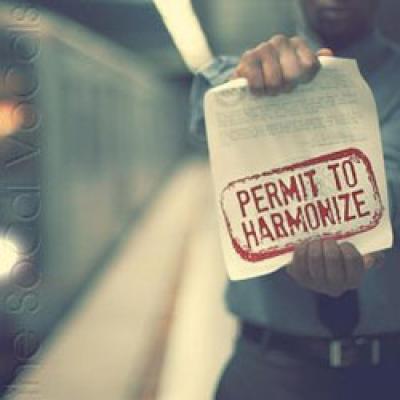 There are two really standout tracks on this album, led by two really standout soloists. Thomas Henry sets fire to Set Fire to the Rain and Segun Oluwadele sings the daylights out of Best Thing I Never Had. These are the best things you can have here: get these two tracks and be happy. Or get the whole album; it has other nice songs on it and you can be happy about them, too.

The SoCal VoCals know they have a good thing going in Henry and Oluwadele, so they each get another turn in the spotlight with What the Water Gave Me and Tightrope, respectively. The former didn't do much for me (solo aside), but the latter was pretty cool. I like the bouncy energy and the textural shift from the Check Up On It ensemble lick in the bridge.

This album makes the most of Southern California's a cappella heritage, featuring a Sara Bareilles number and two works from the oeuvre of Gabriel Mann. My Heart With You is the obvious choice and sounds very nice and all, but I'll stick to my Rescues albums, thanks. In contrast, this version of When We Are One grew on me, largely due to the baritenor hum that pokes out through the rest of the background and gives a nice anchor to the melody and rhythm tracks. By the time I got around to admiring the arrangement, I'd also gotten used to a different voice singing the solo. I know, the a cappella world is cover central, but when we cover our own it's somehow harder to let go.

In terms of Southern Cal's heritage future, we have Kenton Chen's Elena as written, sung, and arranged by Kenton Chen himself. It's a good song. The performance doesn't quite work for me — Chen's voice is so light, so whispery, that the background needed to be really a lot quieter to get anything like a more natural balance. That aside, it's a pretty good cut and I always rejoice when I run across original material on a collegiate disc.

Permit to Harmonize earns its license with plenty of points to spare. Buy some or all of it today and share in the ride.

The SoCal VoCals' Permit to Harmonize kicks the door down with all the oomph of a final chorus from TV's Glee, the triumphant performance that wins the regionals: harmonies stacked, riffs aplenty, and the kind of earnest belting that makes teens swoon and judges nod approvingly.

The name Permit to Harmonize came from a street performance the group gave in which the police demanded their papers, even though they were only singing for themselves. The story has real world grit. It feels like a New York City story (though it happened in Boston). But the group's sound isn't gritty at all; it's sunny; it's California. And that does make some sense, after all.

Technically, the album is nearly flawless. It's in tune, in tempo, and sung with well-rehearsed dynamics and impressive energy. The leads dance through the scales, unrestricted by the range constraints of mere mortals. Heck, they even have good diction. But Permit to Harmonize can sometimes feel a bit showy; big and impressive, but at the expense of intimacy. That's the initial reaction. If you stick with it, if you can find the humanity behind the bombast, there are some very special moments here.

Michael Coverley's majestic chorus on Kings and Queens will impress. Tightrope's Segun Oluwadele will blow you away with a seemingly limitless belt. The "no more lies" homophony moment of Good Luck is a head turner. The distortion sound at the beginning of Kings and Queens is pure audio honey. Lady Marmalade's mash-up with Ain't No Other Man is an inspired choice. And generally, effective syllable choices and a great balance of pads and active backs give the album both drive and fullness.

What the Water Gave Me is an unexpected gem, with Thomas Henry's beautiful, vulnerable delivery set against the explosive dubstep drop quote of Blow. The lead feels truly honest, while the dubstep is so computerized and artificial that it too feels honest. It nicely sidesteps the uncanny valley, and it's easily the most effective moment on the album.

Ben Bram's arrangement of Set Fire to the Rain achieves great success by following precisely this same formula with the same exceptional lead. Compare it with My Heart With You, which struggles to find its humanity, despite equally impressive pitch, blend, and dynamics. It feels artificial because the artifice is so very exposed here. No drums. No octave dropped thunderous bass. No special effects. Just (edited) singers singing.

The credits are solid, covering everything from solos to arrangers, vp to all the production and engineering credits and beyond. That's far more thorough than most, especially at the collegiate level. They even give credit to all the composers. Kudos for that! However, the credits for the composers, and only the composers, are so laughably, microscopically small that one begins to imagine that crediting them was done begrudgingly. Like, "Fine we'll do it. But only in size 5 font in white on a light grey background..." If all caps is shouting, this is a little mouse whispering in a far away field.

Small criticisms aside, there is so much first rate work here. This iteration of the SoCal VoCals will likely be remembered for a long time to come; this album shared with freshman as they make their own legacy. Impressive arranging, excellent soloists, TV personalities, even touching originals all come together to make one for the books.

The SoCal VoCals from USC definitely have a signature sound, and that's plastered all over their eighth album Permit to Harmonize. The group has a rich, full tone, the arrangements are detailed, and the singers execute them with solid pitch and blend.

If it sounds as though that sentence is a bit guarded and that I'm about to start one with the word "but", you're partially correct. This album has many solid moments: the arrangement of Tightrope is great (kudos to Mandy Mamlet), the original song Elena is gorgeous (kudos to the soloist/arranger Kenton Chen for this tender ballad), and the group does a great job with the ensemble piece My Heart With You. There are some interesting soloist choices here — the VoCals pick male soloists for the originally-female songs Set Fire to the Rain, Best Thing I Never Had, and the stunning What the Water Gave Me, which gives each song an unexpected tone. On the Civil Wars cover Poison & Wine, the group rotates through a few different soloists — a technique which rarely works, except the VoCals pull it off seamlessly here.

And here is the guarded "but": something is missing here. The album's most solid moments are somehow lost behind some generic ones. Heart of the Matter is just okay; while the arrangement's fullness helps keep the song moving along, it just feels a little overwrought. Lady Marmalade is a whole big pile of diva-dom (which, to be fair, is what the Xtina/Lil' Kim/Mya/Pink version is too, and that's not especially fun to listen to either). The weaker songs on Permit to Harmonize are especially challenging to critique because there's nothing obviously wrong with them: the pitch is fine, the blend is fine, the soloists are fine; they're just not as good overall songs/performances as some of the VoCals' better songs here. The best songs here would've made a phenomenal EP. The others make it an album that's just good.

One final note of thanks to the VoCals for including credits both to the songwriters of these songs and to the artist(s) whose performance inspired their cover. These were some of the most complete liner notes I've seen in a while, and I also enjoyed the group's explanation of where its album title came from. This is clearly a group with a lot of passion behind it, and that certainly comes across in the recordings here.

Available on iTunes, Amazon, and Spotify.