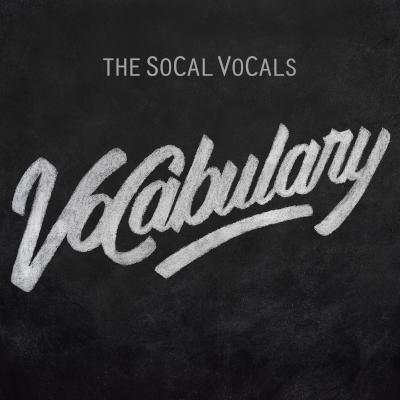 The SoCal VoCals of USC have a genre niche and a signature sound, and this coed group executes both exceedingly well. On the group's latest album, VoCabulary, the VoCals excel on their flashy pop covers, both current (Bang Bang, Levels) and retro (Survivor).

Those glitzy pop songs are what we all expect from the VoCals. But the group has some fun surprises up its sleeve here: the ensemble performance of For All We Know, a song from the 1970 film Lovers and Other Strangers, is beautiful (and if you don't know just how soft-rock this tune is, it was co-written by two members of Bread and covered by the Carpenters — definitely not the VoCals' typical fare). Arranger Nathan Heldman has put together a gorgeous and intricate score that doesn't need a lead, the members of the group play off each other stunningly, and the dynamics really move the song along beautifully. The group's take on the traditional Wayfaring Stranger is also lovely — lead Lauren Tyler Scott commands attention, and Nathan Fertig's arrangement knows how to let the music breathe, with dramatic pauses between notes and a lovely interplay between Scott and the backing voices with a slightly jazzy flair.

More surprises come with two fun medleys. Crazy Natalie merges a sultry version of the Gnarls Barkley song with a Bruno Mars cover, and while this track initially sounds like one song slammed into another, the group's second introduction of Crazy melds it into Natalie and grows the two together, morphing them into a completely new work. The next track, Lay Me Down in Paper Hearts, is another mash-up, which is slightly less successful — the two songs intertwine well in the arrangement, but with five (!) different soloists, the story isn't completely clear. There are gorgeous dynamics in the choruses of the Lay Me Down portion, and I wish that song had stood on its own.

The pop songs here are solid, with spot-on solos, energetic backs, intricate arrangements, and glossy production. I could call out specific favorites, but my scores speak for themselves — nevertheless, The Wire, Hit Me, and album-opener I 2 I stand out, but it's hard to find reasons why any other song is less good than those. With VoCabulary, the SoCal VoCals continue to nail the glitzy, high-energy pop covers that the group has traditionally been known for, but they're also starting to venture outside that niche as well. The group's unexpected song choices just add to the VoCals' depth, standing up beautifully next to their more predictable dance/pop fare.

I have to admit ... I had really high expectations for this album. After all, this is a group that has won the ICCA Finals twice in the last five years, so those expectations are warranted for anyone that listens to this album, be it a critic like myself or the casual listener that may know this fact about the group. Luckily for us, the SoCal VoCals don't disappoint, stepping up to the plate and delivering an absolute moonshot to center field with every track — dynamic soloists and background vocals with stunning arrangements, all finished off with magic touches of production from the likes of Ed Boyer, Bill Hare, and Danny Ozment.

From the very first track of the album, the group shows off not just powerful and consistent background vocals and brilliant solos, but also the group's willingness to take risks in their song choices and arrangements. And luckily for them, these risks pay off each and every time. Segun Oluwadele delivers a very powerful and energetic delivery on a fairly demanding solo in I 2 I, which will probably make the executives at Disney scratch their heads, wondering where he was when they cast Tevin Campbell as the voice of Powerline in A Goofy Movie. Yes, you read that right ... the SoCal VoCals could have picked any Disney movie, and they went with A Goofy Movie and crushed it. And the backgrounds match Oluwadele's energy from start to finish, putting the bow on the opening number and setting the tone for the rest of the album. What's super impressive, however, is that the group can bring it down as well and deliver a sweet and touching ensemble piece too, like they do on the final selection, For All We Know. Here, there's no soloist — voice parts will take sections at times, but there is incredible balance from start to finish where no one part stands out or seems to be coming through more than the others — each part is as important as the others, and what you get is a sweet and gentle sendoff to this album from the SoCal VoCals ... simply perfect.

But, possibly the biggest praise goes to Nathan Fertig, who either fully arranged or had a part in arranging eight of the ten tracks on this album, including I 2 I which we have already talked about. And while I could go on and on about each and every one of his arrangements on VoCabulary, I do want to highlight a major theme in his arrangements, which is his creativity level. In each arrangement, Fertig adds a unique twist that sets it apart from the original, making sure that you know that this is a SoCal VoCals spin on the song. For example, in I 2 I, which is an upbeat rock track from start to finish in the original, Fertig slows it down at the very end, allowing Oluwadele to take a moment and add in some riffs and show off his range in ways the original may not have allowed him to do as easily. Fertig also arranged two mashups, Crazy Natalie and Lay Me Down in Paper Hearts, and all you can do is sit back in awe at how seamless the two songs are from start to finish. The original songs fit together so perfectly that the group slides into one song from the other without the listener even realizing it. I hear Crazy Natalie as a story of heartbreak and anger between the two soloists, Fertig (singing Bruno Mars' Natalie) and Nikki Segal (on Gnarls Barkley's Crazy), and I hope that Fertig wanted to convey that message, as it's simply brilliant in that regard. And then there's the traditional piece Wayfaring Stranger (a piece I sang in my high school days), which Fertig and soloist Lauren Tyler Scott put their own modern twist on, turning it into a soft rock ballad with vocal percussion ... yeah, no way I would have ever thought to do that. But, Fertig did and it's amazing!

Now, the group did stay truer to the original renditions on other songs on the album, such as Bang Bang and Levels. While these tracks are very good arrangements, they do not hit home the same way as the more original arrangements do. That's not to say, though, that I don't like these arrangements ... believe me, I enjoy each and every track very much. VoCabulary hits all of the checkboxes that I'm looking for in a collegiate album, and in my opinion, becomes the gold standard for other groups to try to match.

As I was playing this album, my roommate overheard the music and made one comment. "That's not even fair." I have to say that I agree. The SoCal VoCals have staked their claim as the best collegiate group in the country, winning the ICCA competition four times since 2008, and having tracks on three BOCA albums (2010, 2014, and 2015) in the same time span. With VoCabulary, the VoCals prove again that they are in the upper echelon of a cappella groups, and they have no intention of leaving.

The individual talents of the VoCals is beyond amazing. Segun Oluwadele leads this charge with his presentation on I 2 I, and Malia Civetz belts like none other on Bang Bang and Hit Me, but there are fourteen different soloists on this album, and every single one of them deserves merit in their own right. However, when you put each of these incredible voices together and add a few that don't have solos, the VoCals prove that they are overflowing with talent. Every solo is not trying to emulate the original artists. Instead, each soloist brings his or her own style to the performance — and does so elegantly.

Furthermore, every arrangement is unique and masterfully done. With the talent pool of musicians performing, I was almost expecting 8-10 arrangers as well. Instead, I was pleasantly surprised to see that it was only three. Nathan Fertig and Nathan Heldman are responsible for all ten tracks, with an assist on one from Claire Blackwelder. Each arrangement plays to the strengths of both the soloists and the backing vocalists as well. There are glorious harmonies, counter-melodies, quotes, and the occasional beautiful dissonance. Look out for these two Nathans. Both have some serious potential, and I can't wait to hear more of what they put on paper.

If there is one flaw, it is that the VoCals do little to innovate on this album. If this co-ed group from Southern California is able to prove four times in one decade that they are the best performers in the world of collegiate a cappella, then all I want is that they begin to ask "what's next?" I can't hold that too far over their heads since what they have shown in this offering is nothing less than pure unbridled musical talent. However, I do hope that in the future they prove that they not only have serious talent, but also the ability to really think outside the box and give a presentation that only the SoCal VoCals can deliver.