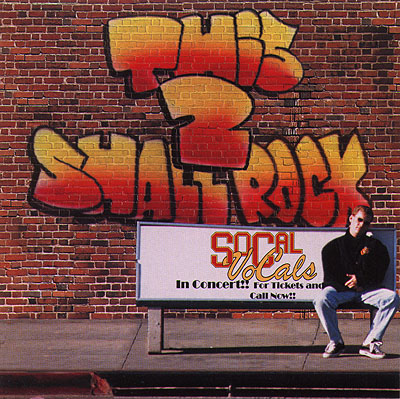 The SoCal VoCals have impressed me by putting together a collegiate album of a cappella music that is produced well, sounds good, and also sounds fun! They are a mixed group from The University of Southern California that knows how to have fun while sounding like they have been working rather hard. Usually, a college group does not have the polish AND the joy in their sound. One usually suffers for the other. So you will get a group that sounds great but kinda stale, or you get a group that sounds like they are having a blast... and the talent is suffering a bit. Rare is the group that puts them together into one package. The SoCal VoCals have got it on this album, called This 2 Shall Rock.

The album is produced by a cappella demi-god (and fiery former RARB reviewer) Gabe Rutman who is well known for making the group Off the Beat the darling of the collegiate world a few years ago. He has really made a solid album, and helped bring out the talents of SCVC. The collection of songs that SCVC has here includes some typical college fare (Son of a Preacher Man, December 1963, Take On Me), but has some other good tunes to bring out some extra interest. A couple of songs that shine include the well known Edna Swap song Natalie Imbruglia stole — I mean made popular — called Torn to open the album, and Everywhere (written by Christine McVie). In fact, three of the songs on the album were written by Fleetwood Mac members. One thing that really stands out for all of the songs is the arranging. Every arrangement is interesting, and has a great sense of balance and strength for the song. Good use of vocal percussion is all over the place.

SCVC even threw in a little bonus: a multimedia track. It was made with Macromedia Director (I think) and was a little slide show of pictures of the group during production. It worked fine on my Macintosh.

The album is good... but it is not quite great. The album has energy and the arrangements are good, but the album lacks some of the magic that can hit you really hard. Other college groups have done this. Songs and arrangements like Amazing Blue's take of The Cars classic Drive from 1996, or The Virginia Gentlemen NAILING the song Insomniac in 1995. Or even Middlebury Dissipated Eight making the Dave Matthews Band proud in 1997 with Satellite. These are songs that make you go "Wow". SCVC could really put it all together if they can make you go "Wow". Right now with This 2 Shall Rock, the SoCal VoCals make you go "cool" — that's pretty good... and not all that far from "Wow".

The SoCal Vocals' This 2 Shall Rock is a big step up from your average collegiate release. The production values are quite good (Gabe Rutman's Asylum Studios strikes again; money well spent) and the soloists range from good to exceptional. Add solid vocal percussion and popular song choices to the mix and you have a more than respectable CD.

By contrast, SoCal's arrangements are a little weak, given the high caliber of soloists they have to support. Sometimes the syllables, pronunciations, chords, or voicings are too "square" for the songs — especially juxtaposed against the pop sensibility of the leads and VP. This doesn't ruin any of the songs, but it has the effect of never letting you forget that you're listening to a collegiate a cappella recording. Perhaps this dualism is a deliberate choice. If so, it seems an awkward one.

The few live tracks are weaker than the in-studio tracks in both intonation and rhythmic accuracy. That's often the case, but it's a good warning for other groups: if the performance isn't quite at the same level, you should have a strong reason for including it. Here that reason isn't exactly obvious.

The end result of This 2 is a halfway zone, somewhere between "wow" (leads and VP) and "yeah ... heard that" (arrangements/song choices). This 2 is a "must have" for fans of the group, but something just shy of that for the rest of us.

This 2 Shall Rock is a good album — the sound is that of collegiate a cappella just a few minutes further into the future than most of the rest of its representatives. That future takes the form of solid and interesting engineering — multitracking replacing single takes, judicious and learned application of effects replacing bland straight-to-disc recording or (equally bad) unbridled experimentation. On this album, the VoCals seem finally to be reaping for collegians what general a cappella itself has only recently sowed. That combination of experienced studio work and youthful energy is a killer one-two.

Several tracks are standouts in this sense — a vibrant Torn, a soulful In Another's Eyes and A Hazy Shade of Winter which is quite lush. Some tracks are less successful, perhaps because they're outside of the group's musical happy medium or simply because they're not easily suited to being covered a cappella (has there ever been a good BNL cover?). In general, I feel as if a group this good is only hampered by any collegiate mentality; a group this good should leave things like Take On Me and December 1963 where they belong: in the archives.

I like this album, but I would have liked it even more if the group had pushed a few more minutes into the future towards what seems the inevitable conclusion — the blurring of the boundary between collegiate and contemporary a cappella, already in evidence here by the studio presence of Gabe Rutman of spiralmouth. Next time I hope to see fewer covers and more originals, less extracurricular atmosphere and more full-bore rock attitude. In the meantime, This 2 Shall Rock is already too good of an album for the category "college a cappella".

Hmmm. I wonder if SoCal VoCals realize that This 2 Shall Rock is a few tracks short of being a Fleetwood Mac tribute album. Well, with four of their arrangements being covers of tunes by the Mac or it's members, it's pretty close. Not that there's anything wrong with that... I just hope you like Stevie Nicks' Dreams, because you get to hear it twice — nine minutes' worth.

But, even if you don't dig Fleetwood Mac, this album is still a good listen. Great energy, good production from Gabe Rutman — including some extensive sequencing on vocal percussion. Speaking of the VP, it sounds like there is some talent here, but I can't tell from the liner notes who deserves the credit. The disc contains two live tracks, one of which is a Footloose medley, and the live VP is quite good.

Clearly, Gabe has done a lot with the studio tracks to beef up the VP. In general, he was not afraid to use effects. But, he still managed to maintain a good balance between preserving the live energy you would expect on a collegiate album and adding enough ear candy to give it a more professional edge.

Still, production can't hide the occasional pitch problem. It's odd, some songs are right on, pitch wise, but a few suffer from the missed note here or there. In general, the soloists are all solid. Jeremy KoCal does an admirable job with the ridiculously broad range required by A-Ha's Take On Me, and I liked Stacy Burcham on Everywhere — one of the Fleetwood Mac-ish tracks.

Having heard only a handful of collegiate albums, I have to say that this is one of the better ones. Clearly not on par with the best professional a cappella groups, but a step or two above the typical college group fare. More importantly, this album has great energy, and rolls smoothly from one song to the next without hitting too many potholes. Honestly, I wish more collegiate albums sounded like this one.

The college a cappella boom of the nineties brought us a lot of struggling young groups that strained the talent pools of their respective schools. With their second album, This 2 Shall Rock, the SoCal VoCals prove that young and struggling don't have to go together. The album is a cut above the college standard on almost every front, showcasing an impressive group of soloists, several terrific arrangements, and memorably energetic percussion. The group has a number of minor flaws to work on before the next album comes out, but there's every reason to think they're up to the challenge.

The VoCals flexibly handle both effects-heavy, percussion-driven tracks like Hazy Shade of Winter and lovely close harmony like In Another's Eyes. In general, the group's tuning isn't equal to their strong arrangements, but it's adequate; it won't mar the experience for most listeners.

I would LOVE to see this group live. Son of a Preacher Man is only scored down because of the (understandably) low quality of the recording and the unexciting arrangement. Where is the credit for the director who maintained dynamic control in front of a screaming crowd? The 5 I gave Footloose Medley belongs largely to that same (different?) director. It's so easy to take shortcuts on an 80's medley; a college crowd will go nuts over it even with half-assed arrangements, erratic tempos, etc. But the VoCals actually do it the hard way, and the resulting track is bursting so much exuberance that I wondered if they would be able to hold it together. There's are slip-ups along the way, but they not only recover, they (holy cow) finish up in the same key where they began four songs before.

Like the director(s), the hard-working percussionists on this album deserve to be credited. You can hear the spit fly on tracks like Take On Me. The relentless energy brought to mind the first vocal percussion I ever heard: my sixth-grade classmates jamming beats to vintage rap, circa 1986. The VoCal men can solo, too. Jeremy "KoCal" and Ryan Bolger sing with a maturity you just don't find in most college men, and David Higgins rocks on One Week.

Unfortunately, I was left with a few critical questions. First, what is Torn doing on BOCA 2000 instead of one of the album's better songs? Amy Throckmorton sounds great cheesing it up '80s style on the Footloose Medley, but Torn is all wrong for a shrieky a cappella soprano. Next, why is it that some of the strongest groups can't tune their own alma maters? I won't name names, but this isn't the only CARA-nominated college album on my shelf featuring a simple hymn wrecked by lazy tuning. In a reviewer's nightmare, this is tracked together with the coolest, most original piece on the album, a self-referential blend of Fleetwood Mac's Tusk (originally recorded with the USC marching band) and the USC fight song. The 4 I gave the track is a reluctant compromise. Finally, do we really need two mixes of the same song on the same album? If you want to show off your techno mixing techniques, pick another song or leave the conventional version off the CD.

The balance of strengths found on This 2 Shall Rock usually comes only with extensive experience. It's doubly impressive coming from a group so young.