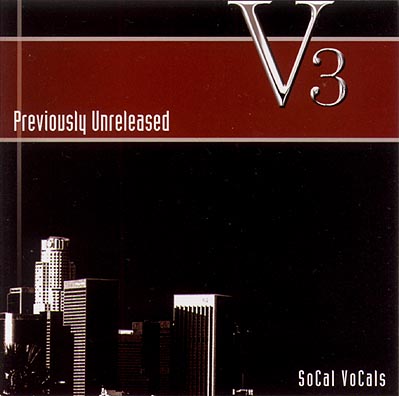 Stand back: SoCal VoCals now rocking the collegiate scene with V3, their deftly produced five-year anniversary release. Pop rock and R&B is the sound and smoove is the style: a highly enjoyable recording.

The CD explodes with funky VP on Drive Me Crazy, and though the arrangements and leads to follow vary a bit in quality, the production, bass, and VP stay top-notch throughout. Particularly precious gems include Dirt Road and To the Wire where leads, arrangements and production align perfectly.

The liner notes declare that "there are no drums, synthesizers or samplers on this album". While this may be technically accurate, it's misleading. The implication is that the resulting sounds have not been materially altered from actual vocal performances. The reality is that most of the vocal percussion hits have not only been sonically altered (EQ. compression), but have actually been cut and pasted into place (sampling). Perhaps they don't consider cutting and pasting to be sampling; but this is really a matter of semantics. Many groups use the cut and paste technique. It's nothing to be ashamed of. In fact, It's perhaps the most determinative factor in explaining why the overall quality of a cappella recordings has reached an all time high. The only thing that really matters though, is that the VP is kickin' and it drives these tracks from first to last.

Bryce Ryness gets kudos for a cleverly funkified version of the Huey Lewis and the News classic The Power of Love. I'm a big fan of the creative rewrite, and this surely qualifies. Even though the actual arrangement doesn't do that much for me, I'd much rather hear this twist than yet another recording of Insomniac, even if it's a well-sung version, as it is on V3.

And then there's a touching and soulful (yet groovy) rendition of Only You. I got into the song as it began. However, the inappropriately placed, cheesy spoken-word bridge completely ruined the mood. It's even more disappointing than a simply crappy song. Here the song strove for greatness and, under the weight of its own hubris, fell to ruin. It's Greek tragedy, right on my CD player.

The leads are all good, some even very good, but there are few jaw-dropping performances. Still, there are equally few moments when the VoCals attempt a task beyond their abilities. That's the mark of excellent music directors. Good stuff here. A worthy purchase.

It warms a reviewer's heart to see a group following her advice. The first college album I reviewed was the young VoCals' This 2 Shall Rock, a strong album with a few weak areas. On this follow-up, the VoCals make distinct progress on every front, resulting in a number of powerhouse cuts and only one dud.

Let's get the dud out of the way first. Not even guest arranger Deke Sharon has anything new to say musically about Yaz' Only You, which was one of the songs my college group debuted with back in 1985 (we weren't exactly blazing any new trails at the time, either). I listened to the awkward spoken-word portion several times to try to figure out if it was supposed to be a joke, but it sure sounds like they were trying to be serious. Either way, it's what we in the aforementioned college group used to call a "WTFM", or "What-the-f***? Moment".

Now that that unpleasant task is out of the way, I can start raving about the VoCals' greatly improved tuning, production, and innovation. While a tuning bitch like me can still see room for improvement, they nail almost every detail of their demanding arrangements, like Julie Moffitt's justly CARA-winning arrangement of her original, Drive Me Crazy. A cappella genius Gabriel Mann's engineering shines on tracks like his own techno arrangement of Total Eclipse of the Heart (another Julie Moffitt solo and another CARA winner, this time for Best Mixed Collegiate Song). And speaking of creative takes on '80s pop, Carmel Heckel's sultry delivery on Power of Love has about as much in common with Huey Lewis' style as Marilyn Manson's version of Sweet Dreams (Are Made of This) has with The Eurythmics. Unlike the version of Smells Like Teen Spirit reimagined as a classical dirge which I reviewed a couple of years ago, this departure actually works.

I hope the VoCals realize that I don't have room to praise every detail they got right, but I do have to mention a few things. Where does a college group find boys who can wail like Bruce Ryness and Adam Blain? I don't recall hearing a lot of auditionees who could pull off those solos. It was a great choice to cover Gabriel Mann Situation songs; Gabe can compose at least as well as he produces, and he deserves a lot more press than he gets. The block on Otherside has a couple of special strengths: the sop/mezzo duet in the chorus is a lesson in power and energy without stepping out of the instrumental role, and the guitar solo does a fantastic job of capturing John Frusciante.

Okay, so maybe the VoCals didn't take my advice at all. Maybe they fed my last review to a goat and just did what they thought was best. But whatever encouraged them to work towards Previously Unreleased, you're going to like where they ended up.

P.S. I'm taking this opportunity to beg all groups to leave the silly hidden tracks off of their high-quality albums. It really detracts from the impact of what you've achieved.

With their wall-of-sound arranging style, rocking soloists, and a general soul-shaking ability to wail, the SoCal VoCals' performance on V3: Previously Unreleased is reminiscent of Off the Beat, with fewer words in the background and tighter production. It's no wonder two tracks from this disc have made it onto BOCA (one this year and one in 2001, when Previously Unreleased actually was unreleased). This really is some of the very best stuff you'll find out there.

The arrangements, mostly by Stacy Burcham, Bryce Ryness, and Julie Moffitt, are one of the most exciting aspects of the album. Complex without being muddy, they make especially good use of a few techniques to tap into the strength of the group. Interlocking sustained notes (Leavin' On a Jet Plane) can be tricky for groups to pull off, falling flat if the singers fail to infuse their parts with enough energy and motion. This is no problem for the VoCals, who have great energy and group musicality. Another tool they use especially well is the addition of a high treble pedal tone to kick the intensity of an arrangement up a notch. Reminiscent of some moments on OTB's When Mama's Not Around (You Oughtta Know and Like the Way I Do immediately come to mind), the use of the high pedal tone can add a lot of motion and weight at once (To The Wire), and add a new dimension to the last returns of a chorus (Otherside) in the skilled hands (or throats) of these singers.

While Drive Me Crazy isn't my favorite arrangement on the disc (it just recently won the CARA for Best Mixed Collegiate Arrangement), it stands out as the best collegiate a cappella original I've had the pleasure of hearing, with a strong solo by the composer (Moffitt). Gabriel Mann, former OTBer, RARBer, and wunder-engineer behind this project and many others, also lends a couple of his own original tunes to the disc (Dirt Road and To The Wire, both arranged by Burcham). With awesome original touches like these, Previously Unreleased has a very fresh and exciting feel.

Well, I just mentioned Gabriel Mann, so let me say that the production on this CD is awesome, clean, and deep. I expect nothing less from him these days. At times the solo might get a little overwhelmed by the background (Otherside), but only when it's worth it. In an art form that is based on the human voice as the sole source of sound, there are going to be moments of wailing where I want to hear the backgrounds matching the solo. It's good stuff.

The soloists themselves range from good and believable to kickass. Julie Moffitt turns in awesome turns on her original and the CARA-winning Total Eclipse of the Heart (Best Mixed Collegiate Song). Carmel Heckel brings soulful and strong performances to the table with The Power of Love and I'm the Only One. And the guys match the chicks, too. Ryness, especially, turns in an emotionally committed and raw solo on Motorcycle Drive By. He also supplies most of the vocal percussion on the disc. This, too, is awesome and artful. Big surprise, right?

The disc is very tight and clean, and there is little technical to fault them for. The occasional slip (like the sloppy beginning of Leavin' on a Jet Plane) serves as reminders that their skill isn't all just studio magic. But they also show they can make some bad decisions, with their "humorous" tidbits annoyingly added to the ends of a couple tracks. I like some collegiate goofing off when it works. Here, it doesn't. They've added some random sound-clips of studio antics that just aren't funny, and they've put them on the same track with songs that I WANT to hear. When will groups learns to keep hidden bits on separate tracks to allow the average outsider to program them out of the playlist? Ah well, that's what the "Next" button is for. Can I get an "Amen"?

I am surprised that this disc did not get a CARA nomination for Best Mixed Collegiate Album. It is definitely worth a listen.