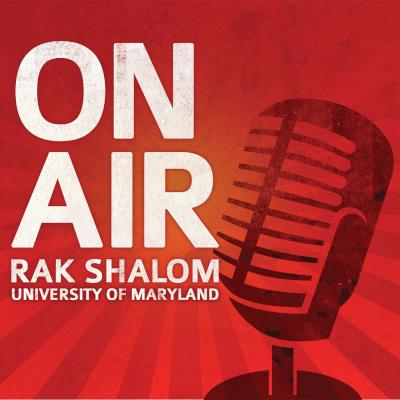 On Air from Maryland's Rak Shalom is definitely a step up from the group's last album, Standing Room Only. These singers have moved past the "yearbook album" trap to create an album that has a broader appeal and a more lasting impact.

There are a few tracks here that are particularly awesome: Roses (a mash-up of Seal's Kiss From a Rose and Idan Reichel's Shoshanim Atzuvot) is beautifully arranged by group members Charlotte McCafferty and Maya Freund, who also deliver the solos. It's a cool spin on an overdone a cappella song, and it's delivered compellingly. Gibor Shel Tauyot has an intricate arrangement and takes the listener on a good journey; I would've liked even more dynamics, but what the group has here is a good start.

Overall, the best songs presented are the purely Hebrew songs or the Hebrew/English mash-ups. K'shehalev Boche has a haunting tone, and Haderech Schelcha moves beautifully thanks to the arrangement by alum Jordyn Smith. This song tells a story without listeners having to understand the lyrics, and there's a stunning build-up in the middle that only lasts a few seconds but drives the momentum of the song.

Not every track here is a home run. Jar of Hearts drags a little bit, and the Heart of Gold part of the Gold mash-up never quite gels. 21 Guns is a bit of a bummer ending to the album — it's fine, but it just sounds like a generic pop/rock song and doesn't leave a lasting memory. But there's enough on this album that is memorable to outweigh those dips. With On Air, Rak Shalom has taken a step to distinguish itself from the dozens of other Hebrew/fusion groups out there, so kudos to the group for this great step forward.

Why do Jewish collegiate groups do straight Top 40 pop covers? I think we already know the answer: these are the songs that college kids want to sing, and the songs that their audience (presumably also mostly college kids) wants to hear. Yet I kept coming back to this question while listening to On Air, because the Jewish and Hebrew music here — the main reason one chooses to sing in a Jewish group over a secular one — is so thoughtfully presented that the American pop covers seem trite by comparison.

I say "presented" because these selections are about more than just the singing, the arranging and the production, all of which is mostly above average. Of the seven Hebrew language tracks, one (Blue Fringe Medley) is a medley of two Hebrew songs plus a bit of Journey, and two (Roses, Gold) are mashups of Hebrew songs with American pop. Hindi groups like Penn Masala have been doing this type of thing for years, to the point where it's become formulaic for them, but it's still new — and quite a welcome change of pace — in the realm of Jewish a cappella. I applaud Rak Shalom for fearlessly blazing a trail. Roses is the best of these, combining Seal's Kiss from a Rose with the Hebrew song Shoshanim Atzuvot, which is about a woman who brings a rose for her love, then realizes he has left her for another. Even without this poetic context, the English and Hebrew melodies intertwine beautifully, thanks in no small part to Maya Freund's luscious Hebrew vocal. Gold pulls a similar trick, combining Neil Young's Heart of Gold with the Israeli song Yerushalayim Shel Zahav ("Jerusalem of gold"), but I don't enjoy the execution nearly as much; the Heart of Gold soloist is pushing too hard, and the arranging is filled to bursting with overly clever syllables like "Zap-a-too-weh-oh", "Zim-ba-we" and "Za-za-na".

Ba'ah Elechem deserves special mention. Though it's not a mashup per se, it does pique the listener's interest immediately with the familiar opening strains of Somebody That I Used to Know and sprinkles that song's motifs throughout with a very light hand. The Hebrew lyrics are in the voice of a father lamenting that his daughter is growing up too fast, so Gotye's familiar refrain is cast in a very different light. And boy, does it ever work.

And what about those Top 40 covers? I'm ignoring them on purpose, and I humbly suggest that Rak Shalom do the same for its next outing. Having "me too" covers of Jar of Hearts, Tattoo and the like on the same album as Roses and Ba'ah Elechem gives On Air somewhat of a split personality that is, unfortunately, all too common in Jewish collegiate a cappella. I suppose it's not realistic to expect any collegiate group, not even a Jewish one, to eschew Top 40 altogether. But On Air would have been a much stronger, more compelling album had the pop tracks simply been cut. Sing them for your fans in concert, by all means, but ask yourselves: do these pop songs really belong on your album?

When you set yourself apart as a Jewish a cappella group, this boundary line often doesn't mean much. There are Jewish a cappella groups who have limited themselves to Jewish liturgical music, those who have included Israeli pop, those who have included "any song written by at least one person who identifies as Jewish" (a great way to sneak in, say, Lenny Kravitz on an album), and those with zero limitations. Rak Shalom seems to fall into more of an "anything goes" groove, and while that's certainly fine as a concept, it doesn't translate into a cohesive album.

In the review for Rak Shalom's previous album, Standing Room Only, Rob Deitz asked "where is the Jewish Penn Masala?" Perhaps Rak Shalom took that advice to heart, as there are some Penn Masala-style English-Hebrew mashups on this album. Unfortunately, they just don't click into a groove the way that the best Penn Masala tracks do. Some of them work thematically: Gold combines Heart of Gold by Neil Young and Yerushalayim Shel Zahav by Naomi Shemer, which translates to "Jerusalem of Gold". The tracks, however, aren't compelling enough for the trick.  And it sounds just like that — a trick — as opposed to a thoughtful, unified creation.

The best tracks on the album are two straight covers of Israeli pop songs: K'shehalev Boche originally performed by the sultry, dynamic Sarit Hadad, and Ba'ah Elechem by Miri Mesika. Both songs work incredibly well a cappella and show the incredibly compelling sound of Israeli popular music. It's dynamic and exotic, and both soloists absolutely nail it.

The arrangements are generally strong on the album, multi-layered and meaty. But the female voices stand out from the mix and sound immature. The tonal difference between the men and women generally distracts from the quality arranging work. This happens glaringly in Your Song, in which the sopranos echo the chorus refrain "and you can tell everybody / this is your song" against a simple background "ooh". The sound is young and flat compared to the much more passionate solo.

While there are a few gems on this album, it's not something I expect to tout as an example of what Jewish a cappella can do. Like Rob, I'd love to see a group advance the form in the way Penn Masala has to their genre, but this isn't it.

To order this album, send an email to presidents@rakshalom.com or message the group on Facebook.