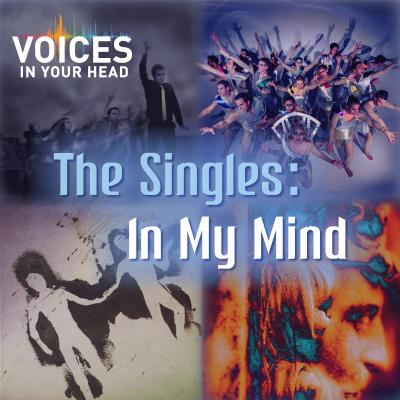 Voices in Your Head's The Singles: In My Mind gives me the feels and that's a very good thing.

The soloists leave it all on the floor: vulnerable and wildly dramatic interpretations combine with technical fireworks and soaring high notes. And unlike so many other recent releases, the back-ups bring dynamic phrasing and unusual textures to lift each song miles above the ordinary. This is a rare feat which makes the inclusion of the "instrumental" (i.e. leadless) tracks, if not amazing, then still less than superfluous; perhaps educating, perhaps exposing of the intricate and artful arrangements, perhaps inspiring DJs to remix, but definitely enjoyable.

Production is lovingly crafted, and liner notes, from credits to photos, are exemplary. The original songwriting stands as strong as any cover on the album. If Singles has a flaw it is only this: identity. The stylistic variations between songs are significant, material, to the core. Where, say, a Michael Jackson album seems to connect all songs with one artistic voice, here Voices speaks with many intriguing voices. But do they belong together? The album is aptly named; listeners will indeed get singles. But knowing that doesn't make the craving for a cohesive sound any less, even as we admire the impressive achievements that each track delivers.

Pop, hard rock, Latin, theatrical ... it's a whirlwind! But genres aside, Pentatonix fans will squeee at Avi's guest appearance as overtone singer and contrabass on Bad Moon Rising. And the Charlie Chaplin feature on Life of the Mind is a perfect enhancement to an already impressively composed and performed work — perhaps my favorite all time quote in an a cappella song.

Highly recommended, The Singles: In My Mind is a bar-setting, award-winning, and deeply varied collection that any aca-fan will enjoy.

The Singles: In My Mind is a tough "album" to review because, as the name suggests, it's a collection of the group's singles over the last few years. These tunes were never designed to constitute a cohesive listening experience, and therefore it's a bit of a challenge to review them as such. What we really have here is a snapshot of an era of Voices that unfolds a bit like the blueprints of a mad scientist; at times odd, at times fascinating, but never, ever boring.

Voices in Your Head has always been a group locked in a struggle between their heads and their hearts. They're among the few college groups that one might fairly accuse of being both too cerebral and technical in their arranging, and too melodramatic in their delivery. For my money, the most successful tunes here are the ones in which head and heart go hand in hand. Such is the case with We Found Love.

I've written about this arrangement at length before in my blog. Suffice to say it's still a marvel. I still love the way the recording takes its time, allowing each moment to land. While too many modern a cappella recordings are still slaves to a metronome, We Found Love ebbs and flows — detouring through worlds of tone and varied, colorful harmony. Though the group tends to default to a brassy, forward tone, it suits the song more often than not. It's an excellent blend of heady arranging and a heartfelt performance.

The other singles each fall somewhere in a less balanced part of the spectrum. I'd say the technical brain won out a bit on Life of the Mind, which, though powerful, feels at times a little long and lost in its own concept. It's too bombastic, and the message isn't as clearly felt, or supported with as much nuance as We Found Love. So too for Titanium, which when robbed of its live staging (and the infamous side chain mic technique) feels like a science project in how much one can use the studio to mimic the vibe of the original track. It's not bad at all, there's just not much to distinguish it from the original version or the dozens of other prominent a cappella interpretations.

On the heart end of the spectrum, we get Suena Así - a lovely, warm, Latin-flavored jam. The relative simplicity of the arrangement puts added onus on the vocals to deliver, which they do with aplomb. My only complaint is that the track runs a little long at 4:18, but that's a small complaint.

Also in the "heart" camp (though not as solidly) is Bad Moon Rising, which re-imagines the CCR tune as an ominous rock experiment. I say this one doesn't pull as hard towards the heart end of the spectrum because the concept really is front and center here, even though the performances are fully committed. It's really a personal preference that keeps me from crowning it an equal success to We Found Love. I just think that one has a cooler emotional arc. Oh, and the soloist for Bad Moon Rising is a little too musical theatre for my taste on a rock song. This group can be melodramatic.

The Singles: In My Mind is exhibit A-Z of why Voices has made such a splash in the a cappella world over the past few years.  Though they don't always find the perfect balance of technical and emotional elements, there's no denying that they're one of the few groups out there pushing the boundaries of what recorded a cappella can be. You may not always enjoy the group's approach, but it's anything but boring. When they do hit the mark, the results can be pretty amazing.

PS: The album includes "instrumental" versions of each track (basically the backing tracks with solo removed). So, load them up, and confuse the hell out of your friends at your next karaoke party!

What does an a cappella group with numerous features on Sing, BOCA, Voices Only, and several CARA wins and nominations do next? It releases a collection of these award-winning tracks, including instrumental versions — so you can sing along with your favorite Voices in Your Head songs!

This collection starts with Bad Moon Rising, featuring Avi Kaplan of Pentatonix. With arranging, recording, and editing by Chris Rishel, an angsty solo performance by Tyler Neenan, earth-shattering bass and overtone singing by Avi Kaplan, and impeccable mixing by Bill Hare, this track captures the essence of the Creedence Clearwater Revival original in unexpected and exciting new ways. This track is featured on BOCA 2014.

Titanium features arranging, recording, and editing by Rishel, but this track also features a solo performance by Brianne Holland that gives Sia a run for her money! With mixing by Tat Tong, this track is featured on Voices Only 2012.

Life of the Mind features arranging, recording, and editing by Rishel, but also original music and lyrics by Rishel and Holland. Combining elements from The Great Dictator by Charlie Chaplin with mixing by Boyer, this track was nominated for the 2013 CARA, "Best Scholastic Original".

Marked as a bonus track, the album concludes with Suena Así, an original by Ivan Pyzow. Arranged by Pyzow, recorded and edited by Rishel, and mixed by Hare, this track is featured on Voices Only 2014.

With tracks by mixing engineers with such distinct artistic voices, credit must be given to Dave Sperandio of Vocal Mastering for expertly fitting these tracks into the same sonic space.

If you're an afcionado of a cappella, there's nothing for you here besides a convenient way to listen to your favorites. But if you're unfamiliar with a cappella and are looking for an outstanding example of the artform, this is an excellent place to start!