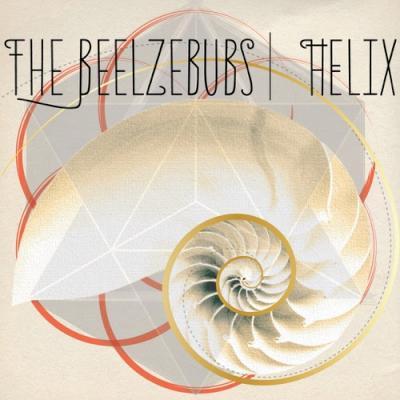 Helix is the most theatrical release I've heard from the Beelzebubs. The group sounds talented, polished, and chipper, like it could pull off a convincing cover of The Book of Mormon's Turn it Off. This is not to say every song sounds like a showtune, just that these singers take it that way if they want to.

To really enjoy this album, I had to listen to it enough to get underneath the solos. With five of the 11 tracks fronted by just two guys, the recording's first impressions are really just a referendum on whether you warm to their voices or not. It's not really a question of like — both are very talented — more a question of connection with their voices and personal style. I preferred the uptunes to the power ballads, and I wasn't very invested in some of the more heartfelt delivery, but that's just one way to go.

Underneath this cohesive set of lead voices, there are a lot of interesting things to listen for. I bumped up Hey Juliet to a 5 when I consistently woke up when it came on, even though it's not as tuned or polished as most of the other numbers. Likewise, I loved the — dare I say — rock and roll energy on Keep the Customer Satisfied. That track may be an oldies rock period piece, but it's not a show tune, and the singers seem to enjoy every note and handclap. Me too.

Annabel proves you don't need a showy solo to get a good performance across. Its shimmery backgrounds and pleasant groove make the song a mid-tempo pop song that should have widespread appeal. On the Top 40 side, the group bops through I'm An Animal with enough zest to make it bearable, and Alright is plenty fine.

Overall, Helix shows that these Beelzebubs have put in the hard work and made an album they can be proud of. I'd like to think they made the music they wanted to. For themselves, not just for us, and we can come along for the ride.

If it feels odd and somewhat atypically unenthusiastic to refer to Helix from the Tufts Beelzebubs as their most natural and conventional album in recent memory, it's only because their standard for innovation and novelty is so rich and storied. They are — fairly or unfairly — victims of their own success to some extent.

The rubric of RARB's judging guidelines doesn't allow me to hold that against them, however, so it's safe to say that this is sure to be one of the better a cappella CDs you might (and should) have the pleasure of listening to this year. Seeing Ed Boyer, Bill Hare, and Alex Koutzoukis's names in the production credits pretty much guarantees a flawless sound from top to bottom — a better trio you'd be hard-pressed to find working today.

In terms of arrangements and performance, however, the work is reasonably on par with the current spate of top-tier all-male collegiate groups, but it's missing that extra special something — perhaps it's ambition or edge, or perhaps it's sophistication and complexity — that used to consistently elevate the Bubs above their peers and make their album releases into true events.

The contrast between certain song pairings helps illustrate this point throughout Helix. The opening Everybody Talks is a bright burst of energy to be sure, but it's mostly one big shouty, block-chord progression that doesn't offer much at all in the way of development or invention in the approach to the source material. Arranged by a '92 alumnus, it feels almost like a typical 1992 collegiate a cappella arrangement given the deluxe treatment in a 2014 recording studio. By contrast, the subsequent Alright is a terrific combination of rhythmic layers and chordal pads that assemble the funk/R&B groove in a manner that keeps the ear engaged even when the song starts to repeat without too much variation.

This same sort of contrast is borne out again beginning with Jealous of the Moon — a lovely tune, prettily arranged, but in a very conventional approach save for the occasional jazzy chord substitution here and there. At 4:24, it's the longest song on the album, and it feels that way. As pleasant as it sounds, nothing about this arrangement compels you to want to listen much beyond the first two minutes or so. I'm An Animal is of course a wildly different song, so it's almost unfair to compare. But forget the tempo and feel and just focus on the approach. Pretty much from the first eight bars, you know something different and special is going on here — and you're then hardly surprised to see that the track is arranged by Ed Boyer (himself an '04 Bubs alum). Between his work with the Bubs, with Hyannis Sound and elsewhere, Boyer is notorious — in a good way — for his approach to building sounds and building arrangements rather than focusing strictly on the finished sound, and the results are almost invariably terrific. One might call it an "instrumental" approach to arranging rather than a purely "chordal" one, and it's why this is the best selection on the album by far.

It's also telling to note that the best work on Helix is also the shortest — the aforementioned Alright and I'm An Animal clock in at under three minutes. Annabel, the best of the mellower material featured here, is but 3:23. With the exception of Exit Music (For a Film) — the sort of classic Bubs cover song few would probably attempt a cappella, but also arguably one few particularly ever cried out to hear a cappella — the forays into longer songs often translate into repetitive arrangements that are markedly less varied and interesting as they move through their back halves.

What does this all mean for you? If you're a Bubs devotee — and I count myself as one — you probably own this already (and perhaps you're finding my criticisms overly nit-picky as well). If you're on the fence or by some chance are unfamiliar with these legends of collegiate a cappella, there is certainly better work to sample first (any of their prior five albums in fact). But having just recently celebrated their 50th anniversary, the Bubs continue to do this as well as or better than almost anyone else out there on the all-male collegiate scene, and Helix does nothing to break that chain.

The Beelzebubs are arguably the most consistently excellent a cappella group in the collegiate domain, and Helix lives up to the group's historical track record. That evenness is even more admirable (and elusive for many other groups) in the collegiate world, since the group's entre membership, by definition, turns over every few years. The Bubs seem to have discovered the secret to consistency, so for the benefit of other groups, here's my perception of what the Bubs seem to get right, every time.

First and most importantly is the Bubs' attention to song choice. Some of the tracks on Helix have certainly been covered by a cappella groups before — Everybody Talks and Shake it Out, for example. But hand-in-hand with song choice is soloist choice: every single soloist on Helix sounds outstanding on his song. So while you've heard other a cappella versions of Shake it Out, Cailin MacKenzie channels a fresh and deep emotion in this version of the song. Kent McCann sounds so perfect on Annabel that it's hard to remember that this song was sung by a woman in its two more famous incarnations, Kat Goldman's original and the Duhks' cover.

The Bubs also know that the song is more than just the soloist, and their arrangements on Helix — all written by group members or alums — are impeccable. Music Director Michael Grant contributes to five of the arrangements here, and his familiarity with his group's voices is apparent. You Lost Me starts out with a chill-inducing fragility, then grows with a crescendo that's both smooth and intense. The group sing-along on Keep the Customer Satisfied has pizzazz and energy, but it's the voices that aren't singing the melody that give the song its texture and help elevate it beyond a pub sing-a-long.

With songs, soloists, and arrangements in hand, the Bubs turn to a top-notch studio crew, including their own alums Alex Koutzoukis and Ed Boyer. Boyer and Bill Hare (and, more recently, Koutz) have had a hand in a long string of Bubs albums, and that consistency behind the boards is apparent in the Bubs' recordings.

On every single Bubs album, there's one song that I could (and generally do!) listen to over and over again. On BATTLE, it's Careless; on Play The Game, it's Don't Think Twice, It's All Right. On Helix, that standout track is Alright, from Dorian Pistilli's sultry solo to Michael Grant's textured arrangement to the group's obvious energy, even down to the killer bassline (seriously: I could listen to just the bassline from this song all day long, if just that track were available).

Helix is not flawless, and there are a few choices here that don't work perfectly. Madness and I'm An Animal are a bit repetitive, and the mellow subtleties at the beginning of Exit Music (For a Film) don't connect fully after the raucous energy of Hey Juliet. These are relatively minor in the larger scope of Helix, though. This album stands up beautifully in the Bubs' discography, showing that even with different voices and different songs, this group knows how to deliver an outstanding album, time after time.