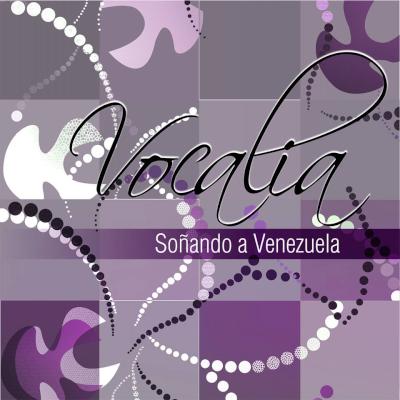 Distortion, octavized bass, and more processing than a supercomputer (or iPhone). Consideration of technology is now often a component of reviews for modern a cappella recordings, and it can be difficult at times to get to the heart of the matter: how is the singing? Soñando a Venezuela, from the Venezuelan group Vocalia, is a breath of fresh air which disavows the bleeps and blips in favor of clean, energetic singing, which restores a cappella music to its long dormant relative: folk songs. Vocalia's joyful exuberance on these five songs celebrating love, nature, and spirituality is apparent and contagious. Miguel Angel Santaella's arrangements are nicely textured, with moments of simple elegance dotted with crunchy, chewy chords. Cascades are effectively used, as are syllabic choices such as the plucky "bling" in Pasaje del Olvido.

Even as the group's honest, natural sound harkens back to a different time and style of vocal music, Vocalia is ensnared in some of the more common musical traps, including pitch and timing. For the most part, the former is solid, even admirable, if not flawless. I am particularly impressed with the pure bass lines, which are typically vulnerable to nasty pitch problems, especially when engaged in moving lines such as those on the album's closer Alma Llanera. There are, however, moments where one part's pitch inaccuracy is glaringly apparent. The timing factor is more generally problematic. The syncopation between vocal parts falters periodically where entrances or cut-offs are late. In a vocal recording with no accompaniment or percussive elements, syncopation is key and it collapses the structure of the entire song where the timing is off. There are also inconsistencies in speed between parts, which creates a push-and-pull which detracts from the beauty and power of Santaella's chords. There is one other distraction which can best be described as, for lack of a better term, "background sounds" or "mouth sounds". Several times throughout the EP I found myself looking around to see if someone was speaking with me, and it was not until I ran the audio back that I noticed artifacts which took me out of the musical moment. I later learned that some of the group's recording occurred while riots were underway in the streets outside, so perhaps there is a touch of political history in the artifacts here. Perhaps, in a way, this strengthens the natural authenticity of the group's overall vibe.

Vocalia is clearly a talented, energetic small ensemble capable of pure, evocative singing. With a little tightening of the rhythmic elements and the production, I have little doubt the group can produce a memorable, lasting (historical?) collection of music.

This EP from Vocalia, a nine-member vocal group from Caracas, is the first album from the group and shows both great promise and phenomenal skill. Recorded during 2012 and 2013, Vocalia manages to assemble a wonderful introduction to its musicianship. Transcending the political and social issues that affected the recording of its album, Vocalia presents a solid effort here.

Something about the way this album was produced makes it sound rich and full in a way that reminds me of some of the best older jazz recordings in a cappella's history. I'm not sure if it was the tracking, or something about the specific quality of the singing, but time and time again it reminded me of the same chambery old Whiffenpoofs recordings, or more modern jazz choral works. The best track of this album exemplifies this perfectly: Pasaje del Olvido simply rings with nimbly handled complex jazz chord constructions and intricate rhythms.

You know that old aphorism about how music transcends all language barriers? I don't speak any Spanish at all ("si ves algo, di algo" and "piso mojado" don't count, right?), and yet, it didn't matter one bit while I was listening to this album. I spent my reveiwing time completely in the dark about the meaning behind the songs. The sheer musicality of each member of Vocalia shines through immediately in the opening track and never stops. Of course, referencing the translation later enhanced my listening experience, but please don't let it stop you from listening to this album. Although I laughed when I found out that the names being sung in Flor de Mayo referred to cattle, it didn't change how much I enjoyed the track. If you speak no Spanish, like me, do yourself a favor and listen without the translation first. You will see that it doesn't matter; you will understand the prime emotions which come through clearly.

This is the album you want to play for your friends to show how a cappella is proliferating all over the world. Vocalia synthesizes so much of what we consider standard in the United States into a strong little album recorded in Venezuela. The acaboom is real, and it's reaching further than ever before.

The overtones soar, the harmonies click, the tone is pure and the production keeps it honest. Soñando a Venezuela is a fresh break for the contemporary a cappella consumer. The feel is certainly more choral than one would expect from an a cappella album, but the product leaves few, if any, complaints.

It is my fondest wish that all a cappella albums would be produced in the same manner as this one. It gives the listener all the power of how they want to partake of each piece. Each voice part can be picked out if you are looking for it, but they blend so well together that they won't stand out unless you want them to. This is particularly supportive of the arranging style, which takes the background to the forefront by splitting the lyrics of the original song across all the voice parts, engaging the entirety of the group at all times. You may often hear those in the theatre say, "There are no such thing as small parts, only small actors." This album has no parts that aren't important to each piece. Canción de Esperanza is probably the most successful with it's aural baton-passing, easing into the transitions with exceptionally crafted chords, and slowly adjusting the motion within.

There's a hiccup or two in Canción de Esperanza and Así No Más, where all the lines unite on a chord that jars greatly with the key. This wouldn't be a problem, given the otherwise fantastic and innovative structuring throughout, but as it only happens for a moment and doesn't lead to something new, it is clearly a mistake.

While the energy is carried through solid dynamic play, Vocalia lacks a true piano dynamic, something their more choral nature leaves you craving to hear. A lack of true uptempo songs makes for difficult repeated listens, but will provide an enjoyable break from your everyday pop-appella.