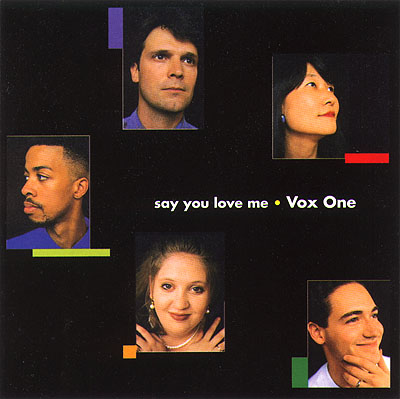 Most vocal jazz sucks because it simply isn't jazz. It's just jazz standards sung in a Manhattan transfer inspired style. Jazz isn't about the songs. It's about what you do with them. And most groups turn them into glee club crap.

Vox One, on the other hand is the real thing. They take a wide variety of songs and really explore them musically. It isn't wildly experimental jazz like you might expect from, say, Bobby McFerrin. These are very carefully polished and easily accessible arrangements. In many ways, it's very traditional. Which isn't to say that they aren't very brave. Look at their repertoire. They riff on everything from folk (a stunning Shenandoah) to cheesy light-rock (the stuff you'll hear on your local "soft rock/easy listening" station). You have to be brave to sing a song like Lovin' You. You have to be a real jazz musician to take the song to the wonderful new places that Vox One does.

The alternate mix of Out There gives you a perfect idea of why Vox One is so refreshing. The track starts with a hard hitting percussion line that is soon augmented by a fuzzy guitar line. Pure rock and roll. Then, surprisingly, they start laying down elaborate jazz chords over the rock and roll backdrop. Just when you think you've got a feel for the jazz chords, suddenly a free-wheelin' soloist bursts out of the pack and it's rock and roll all over again. It's a wild and unpredictable hybrid of sounds and you'll love every twist and turn.

Sometimes the jazz arrangements have the tendency to make the songs sound detached, as if the words have no real meaning. The lyrics often take a back seat to their musical explorations. For example, in Time After Time they don't just reinvent the melody of the song, they basically discard the traditional notion of melody altogether and instead serve up a string of evenly measured chords. At first, it doesn't work. The music doesn't really move anywhere or have any logical structure. It also seems vacant and passionless. But the more times you listen to it, the more you pick up on the small variations in the piece. It's not bland at all. It's just subtle and that subtlety gives it a poignant sadness.

Although Vox One covers a lot of great pop songs, it's actually their originals that sound the most contemporary. Whereas they pop covers bend to their jazz stylings, the originals reveal Vox One's knack for pop.

This CD is an excellent addition to anybody's collection. You don't need to like jazz to enjoy this disc. I highly recommend it.

Vox One is a great vocal jazz group. Given that, some of their interpretive choices simply rub this reviewer the wrong way.

The group's blend is uniformly smooth and tight across the album... but it also has a tendency to sound thin, marked by light if not breathy intonation, pan-American flat and pre-nasalized vowels, and a mix which continually threatens to drop the bottom out.

The group's arrangements are sometimes good (Whisper When I Speak), particularly when the original is jazz... but sometimes incomprehensible, attempting to bridge the gap between pop and jazz (Time After Time, which admittedly is interesting rhythmically, a nice play on the title) or between folk and jazz (Shenandoah, which is utterly whitewashed and absolutely awful). Vocal percussion is well done, and engineered for maximum effect (other groups take note: this is not the same as "for maximum volume"; Vox One shows admirable restraint).

Finally, perhaps too much experience with pale blend leaves the soloists sounding rather un-soloish. While crisp and in tune, they could not catch this reviewer's ear as against the backing vocals. Perhaps this is in the nature of vocal jazz (not my specialty).

So: a good album, hampered by bland blend and production, and by some real interpretive disasters.

Vox One is so good, it's deceptive. What's become commonplace today is for groups to be either very good or very poor...very rare has a group been grey. So when a group records a CD that is very easy on the ears and technically sound, it could be very easy to say "eh...it's OK", when what we should be doing is holding it up and saying HEY THIS IS GOOD STUFF, BUY THIS CD!!!

Hopefully a point has been made there.

I've heard of Vox One through the a cappella circles before...always in good words. And for some reason I've always heard the term vocal jazz associated with them; given my own personal definition of jazz, I wouldn't put them in the hard and fast jazz category, but jazz with some very contemporary feel to it.

As I said, it's very easy to sit back and listen and say what Vox One accomplishes is very commonplace, but when the arrangements are as lush as these, right from the start with My Cherie Amour, followed by a unique take of Time After Time, it's nice to be lulled into musical bliss like this. The liner notes actually state it better than I ever could: "The depth of their arrangements is virtually unequaled, incorporating vocal `guitars', `horns', and `drums' with electrifying accuracy".

It's a shame the group is no longer together, because their example is one that should be followed by other up and coming groups; for now though, that example will have to be one learned through recordings.

There aren't many a cappella groups in the same league as Vox One, a vocal jazz group originally out of the Berklee College of Music and long a staple of the contemporary vocal music scene.

Say You Love Me, originally released in 1995, showcases the incredible versatility of the five singers (three men, two women) on a variety of tracks. From the vocal band-ish My Cherie Amour to the jazzy, almost Phil Matson-like Shenandoah, all the way to, yes, White Christmas, it's all covered here.

A real treat is Out There, a Paul Stiller-penned number that appears on this album as an "alternate mix". An off-beat, off-kilter track that would be quite at home among early Manhattan Transfer, it caught and held my attention on every listen.

If I had one caveat, it's that Say You Love Me, as an album, comes across more as a sampler CD than a coherent, stand-alone work. With so many styles sharing so little space (a rather spare ten tracks), it doesn't help that folk songs, eighties hits, and even a Christmas carol pop up one after the other with hardly a unifying thread, style, or sound.

To the a cappella consumer I'd say this: Vox One released four CDs. This is the first. Pass on this one but take a close look at the others (watch for the upcoming RARB review of Chameleon).

Say You Love Me (originally released in Japan in 1995) is a soothing combination of originals and covers. It's not dance party music, but put it on during a relaxing dinner for two, or during a bubble bath, or whenever you are in a mellow mood. Skip the out of place Christmas track unless it's that time of year! At first listening, the effortlessness with which this group performs may trick you into thinking their music is simple. Take another listen.

For the most part, the arrangements are quite complex with syncopated rhythms and close harmonies. Interest is maintained without a preponderance of annoying sounds (no dug-a-dig-a-dungs). Their blend is seamless, and they also know exactly when, where and how to use vocal percussion.

Vox One's soprano and tenor, who take the leads on most songs, glide effortlessly to beautifully shaped and clear high notes. The alto's voice was not of the same caliber, but she was the soloist and arranger of my favorite track, Time After Time. The arrangement takes a standard '80s tune and transforms it into a beautiful, jazzy work of art.

There were only a few things on this album I did not like. In Autumn Leaves, the tenor attempts a really low note, which is hit, but lacks the resonance and strength of his higher notes. He also went under pitch a few times in other songs, most noticeably in Shenandoah. Shenandoah was also the only arrangement that reminded me of the countless times I have seen male groups do Loch Lomond.

If all your CDs are a la spiralmouth, definitely skip this one. But if you love a more mellifluous sound, get this CD before they stop printing it!