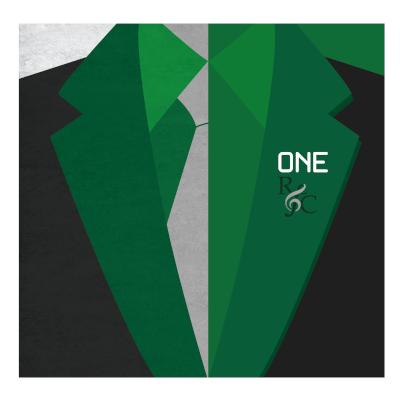 When you hear the words "run for cover", what image is conjured? Probably a high intensity, adrenaline-filled scenario of some kind. One is an album that shows that this rock-oriented group has a clear sense of its identity. One is saturated with distortion and a driving rhythm section. Run for Cover has done a very good job at creating a cohesive style throughout. If some elements were taken a few more steps toward the innovative, this album could easily have been raised from very good to great.

The album starts strong with an affected intro to This is Gospel. This song remains strong, though due to some questionable mixing, the solo gets a little lost. The Wanderer is the shiniest gem on this album. The soloist is extremely expressive and the arrangement provides the perfect underlay. This track alone is worth the buy in my opinion. Radioactive and Cry Me a River are disappointing; this is where some more risks might have paid off in both arrangement and performance. Radioactive has sustained "ah"s over the chorus, which instead of giving it weight and energy just plays as dull and uninteresting. The arrangement redeems itself in the last thirty seconds or so. Cry Me a River is slightly better, but the melodic hook sung as "da da da" makes me cringe.

Madness is a nice solid track. What's cool is how accurately the group takes on the guitar solo in the middle. It's the beauty of modern studio techniques in a cappella. Ghosts is a wonderful end to the album. There are stand up and cheer musical moments throughout this track, including an amazing marching drum beat, morphing into dub-step, into an eerie, emotional ballad; basically a complete journey in a single song. A tip of the hat to the guys for this one. It may not be the shiniest, but it's got the most heart and depth and is my favorite track on the album.

Animals Talk, like The Wanderer, is a bit of gold worth mining. Payphone deserves an "A" for effort: it ends with a mash-up that is fantastic in concept, but falls short in execution. But what's worth noting is that it shows that spark of innovation and risk that I crave in most of the rest of the album. Even the diamonds I mentioned are safe. All I can think when I listen to this is "conservative innovation": nice solos and arrangements that for the most part, when not stagnant are great. But pushing the limits, trying crazy things musically, being vulnerable during the performances — these things would make me stand up and cheer. And I think Run for Cover is talented enough to do that.

I mean, don't get me wrong, the chord structuring and arranging abilities are fantastic. It takes a nuanced ear and a clever brain to breathe life into massively overdone songs like Cry Me a River and Radioactive. I would have never dreamed to put She Will Be Loved into Payphone to begin with, but that's not even the most innovative bit of the song. Both this song and Animals Talk, the Neon Trees's two-songs-in-one arrangement, have a beautiful display of musical structuring from their opening chords. To insert songs from different chord structures into newer songs by the same artist is an delicate operation, and only musical surgeons can make it happen. If you're looking for a how-to on innovative arranging, start here. Incidentally, if I didn't already know that Chris Rishel had a hand in Cry Me a River and Animals Talk, I would have thought the group was trying to emulate his brilliant chord shift-and-swells that make his We Found Love so enrapturing.

And the layering! Beautiful answer to the copy-paste plague that dominates pop song covers. Every time a part comes back around, something new is added on top, changing the feel and leading the arrangement straight into the next part.

But despite all this great structuring going for it, One is lacking in all the places that would propel it to a "5". Having a great blueprint for success is one thing, but if the execution is lacking in intention and energy, the end product leaves a far more "average" impression than it should.

The dynamic control is the biggest weakness of the album. It feels like the group relies more heavily on the arrangements' built-in development and layering, instead of adding on that extra layer by controling its instruments. The soloists suffer this same flat energy. With the exception of Max Laponsky's strong turns on Animals Talk and Madness, there is little being done to show confidence in their solos. The Maroon 5 mashup soloists can't decide which song is more important to the theme, and so both get jumbled instead of altering the focal point to draw your attention.

Contradictory performance choices weaken the product as well. Even though Cry Me a River has fantastic structuring keeping it fresh, the choice to play each chorus (and every fast sentence lyric, of which there are many) as staccato makes the song comical, sapping the smart anger of the lyrics. With the song order driving the focus towards the end of the album, closing on Ghosts is anticlimatic. It doesn't help that Ghosts is similar in tempo, percussion, and tonality to Radioactive.

This group has an amazing foundation to build from, and I wouldn't be surprised if its next release carries some great weight come 'round CARAs. But Run for Cover won't rise above the pack until it can collectively immerse itself in its music and lose the fear of taking risks.

Run for Cover comes out swinging with its debut album, with energetic song after energetic song after energetic song. That's right, this album is eight straight songs of hype that only comes down from that cloud for a brief interlude to start Cry Me a River. While I am always a fan of fun, driving, fast-paced songs, ballads and slower songs offer a nice break, and give more meaning to the hyped-up songs. So, by the time I got to the last songs on the album I was happily anticipating the end.

On a more positive note, the group does put forth a lot of energy matching the fast and loud songs well. You can tell that even in the studio, all of the members were moving around, having fun singing all of these tracks. This is especially noticed on This is Gospel, making it the perfect opening song for One.

As mash-ups become more and more common in a cappella use, Run for Cover makes sure it doesn't miss out and includes not one, but two mash-ups of songs by the same artist. Animals Talk is a clever and thoughtful combination of the two biggest hits by Neon Trees; the men jump back and forth between Animals and Everybody Talks with precision and grace, the transitions thought-out and executed perfectly, creating a unique listening experience. By contrast, Payphone (a Maroon 5 mashup) feels forced and awkward.

Looking forward, I would love to see the group work on its emotion and heart. Even when the energy is there, the results often fall flat, making exciting and entertaining songs bland and boring. In Cry Me a River, a song that benefits from some soul, all I heard were the notes, not the story. I believe that Run for Cover has what it takes to captivate and engage its audience across every medium. I know that if the group can learn to incorporate some heart and emotion into the recording of its songs, big things will happen.