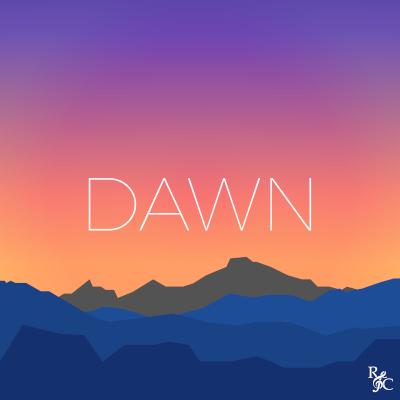 Run for Cover is the University of Chicago's all-male a cappella ensemble. The group was established in 2008 and is the the only all-male group on the university's official a cappella council.

The group's new collection, Dawn, is mostly covers of recent recordings by today's radio groups; Run for Cover has chosen pieces by Imagine Dragons, Madeon, and Nick Jonas, among others.

One thing I notice about the pieces on Dawn is that the better tracks are the longer ones, Krwlng and Gold. Slightly shorter Chains also deserves mention.

Krwlng is the best of the best. It is the longest track, and it appears that Run for Cover worked the hardest making this arrangement into music. The intro is one minute long, is a very nice blending of tones, and portends that something is coming later in the song. The soloist begins and energetically presents the lyrics. The production is excellent, staying true to Linkin Park's original rendition. The blending of the background and foreground singers is done well. The vocal percussionist stays out of the way, just being a part of the music. Overall, this track is very creative in every way.

Run for Cover's rendition of Nick Jonas's Chains begins as a rather bare structure. The vocal percussionist starts and is joined by the soloist and slowly the background singers enter. EXCELLENT. The soloist pulls out the lyrical meaning with appropriate emotions. After building from vp to solo to minimal harmony, suddenly everyone sings in unison. That is powerful. Throughout, Run for Cover uses great phrase dynamics and internal vowel dynamics.

Although not as long as Krwlng, Gold shares the creative aspects of Krwlng. Again, the foreground and background are properly balanced throughout the song. Like Krwlng, it begins with an wonderful tone poem. The rhythm created in the background drives the song. The soloist sings with emotion and musicality and is so effective in this song.

On the other end of the scale are Cover Me and Battesimo del Fuoco. I have always said that an album's first track needs to grab my attention and somehow make me want to list to the rest of the songs. Battesimo del Fuoco fails in this regard. The group has sync, intonation, and tuning problems.

Cover Me has similar problems and more. Production fails to hide a strident tenor and does not properly layer foreground and background singers with the latter overwhelming the former.

The other four songs blend some of the good and bad. Occasionally good musicality mixed with sync problems, spotty emotions, and up and down drive with bad production segments. Also, interesting instrumental sounds but minimal dynamics.

All in all, there are some tracks from Dawn that can be put into rotation for future listening. I would like to see Run for Cover to be more selective in its published works.

It is with great difficulty that I write this review of Run for Cover's release Dawn. The album is the second release from this University of Chicago male group, and it perplexes me to no end. It is at once captivating and catastrophic, compelling and cringe-inducing. I love it and I hate it. So: good job guys, you literally give me all the feels.

To get straight to the point: the first half of this album is really bad. I had extremely visceral reactions to a few of the opening tracks. And they were all negative. Some of the singing is not up to par with what I was anticipating. Though in looking back at my review of the group's single Gold, it is exactly what I should have been expecting. There are a lot of intonation issues throughout, plus some odd phrasing and harmonic impulses that don't always click. But the unfortunate drawback is the soloists. Sometimes the support is lacking, so there is this impetus by the listener to raise their eyebrows while listening to the track. The fundamental musicality of the opening tracks made me think "Oh my gosh, really?"

But then that turned into "Oh my gosh, really!" because each of the arrangements is freaking incredible. I let out an audible gasp at the transition from vocal replication in La Lune to the more EDM/dub production. Each of the tracks have this moment of awe and occasional bursts of brilliance. It's not clear whether that is from the natural exuberance of the performers or the great production work by the likes of Brianne Holland, Bill Hare, and Dave Sperandio, among many others listed on the group's Facebook page — but it is simply amazing!

And then the change in musicality happens and RfC presents the album that signifies they are next-level and that the group's talent is abundant. The last five tracks of Dawn are masterful. Each brings forth an incredible display of emotion and ability. A new dawn has begun. The transition starts with Collide but really takes hold with Chains. I don't know what caused this substantial improvement on all accounts. But it is there and it is palpable. These guys are freaking incredible!

I've already stated how I feel and what I think of the closing track Gold. In the context of the entire album, those sentiments remain. But in truth, the breakout track is Krwlng. I can't even put into words how fantastic this song is. It's a different sound than anything else on the album, but it also synthesizes everything else that has come before it and follows afterward. Kudos, guys, kudos.

Initially, I was going to score the album a "3", especially because of those first three tracks. But the abrupt change made me rethink my entire assessment rubric. What to do? The lackluster and incomplete liner notes didn't help my first impression of the album. The repeat listenability score stays low because in an album sense, you'd have to skip the first tracks to get to the heart and excellence of the album and that may be too much for the average listener. And it took a long time for the leads to live up to their potential.

You think of "dawn" as the beginning of something, a new day, a chance to start afresh. That is definitely the case for the second half of RfC's Dawn. After a lackadaisical start, the last tracks are pure gold. Get this album if for no other reason than to help these singers keep creating recordings like the back-half of this one in the future.

There are strikingly charged lyrics in the songs selected for Dawn. There are massively dense and explosive soundscapes, heavy on electronica and effects-heavy punk rock. A previous RARB Single of the Year, Gold, with a fantastic guest artist, closes this album. Soloists are strong and the source material is unique. Basically, there's a lot of musical content and different applied uses to react to on Dawn, and largely, to simply enjoy.

Sadly the only odd duck out is the very first track, Battesimo del Fuoco. It's different enough to feel like a prologue, so placing it upfront is certainly one option, but it's so different, and a heck of a lot less interesting than what's to follow that from my view, it needn't be on this release at all. Run for Cover's signature razzle dazzle production style welcomes us to the rest of the album with Dare You, a huge venue-filling piece that will make you search for a lighter to hold up. La Lune is a wonderful listen because it's so danged hard to sing — ever-shifting rhythmic and vocal patterns give this song a mini rock opera feel with different acts playing through your speakers.

A few issues creep into Run for Cover's high standards, though. Two of the tracks have backgrounds mixed far too loudly: Collide and Cover Me. The rub here, is that the backgrounds in these songs aren't nearly as sonically satisfying as the leads, making the crowded space disappointing. I previously reviewed Bring You Down as a single for RARB. I like it less now, because the relentless vp smacking is quite off-putting after this many listens — especially so hearing it placed right after such a strong offering.

Stay within arm's reach of this group, though, because Gold is still totally amazing and would certainly still be in the running for a Pick of the Year distinction with its perfect collaboration and journey arc. However, Krwlng is my personal favorite. This is a bold choice: it's a long piece, it's an intense Linkin Park song whose time has passed us now, and the lead doesn't come in until the two-minute mark, all requiring that much more variation and technical skill to keep the listener near. It's fascinating, fun, and puts Run for Cover in its best light.

You'll definitely want to hear Dawn, no doubt about it.