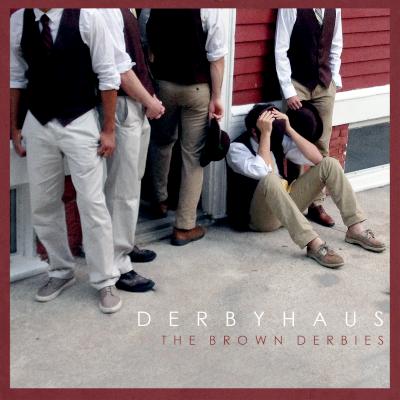 It's fair to say that Derbyhaus, the latest release from the Brown Derbies, is a step forward from the group's 2012 release, Nice Guys, Better Guests. But a quick look at my review of that album suggests this isn't really saying much. What's unfortunate here is that the step is way too small. This is certainly better work than the group offered two years ago, but it's still a maddeningly frustrating collection of performances that left me scratching my head at a fair number of artistic choices.

Perhaps it's an exaggeration, but in 15+ years of reviewing, I can't recall an album where my primary complaint — by an overwhelming margin — was the sheer ignorance of dynamics. "Dynamics?!?" you ask incredulously. "THAT'S the bone you have to pick?!? But were the singers in tune? Were the arrangements cool? Does the group have good soloists?" I can hear you insist. We'll get to all this in a moment.

But first, listen to the opening of Not Over You and tell me why the opening piano riff is so present, so loud, and so far forward in the mix. Listen to the opening of Charlie Brown and tell me how this song is going to take me on a journey when volume-wise, the group starts at the end and just stays there for four minutes. Explain how a simple, old-school, verse-chorus classic like For What It's Worth can hold my interest when the background just plods along rigidly on auto-pilot at mezzo-forte/forte and never wavers. Even the capable and nimble riff-ery of Noah Lubin on the final choruses isn't enough to distract from the seemingly oblivious background vocals. You get the idea. I wish I knew why these gents don't seem to make dynamics a priority, but it's so consistent and egregious here that it is inescapably aggravating.

So what about those earlier, more typical questions? Unfortunately, the answers are "yes, absolutely" (tuning), "not particularly" (arrangements), and "about average" (soloists). In an era of auto-tune, reasonably good tuning is expected — certainly from any of the prolific studios like The Vocal Company — and that's predictably the case here. They can't manufacture blend (well, at least not entirely), however, and there are a few songs (Counting Stars, most notably) where the mix is a bit fractious, sounding in places like a series of different parts sung independently of one another rather than a cohesive ensemble singing the same song. As for arrangements, with the possible exception of a crafty Rihanna mashup, there is far too little layering and way too much reliance on big, ringing block chords or homophony on word echoes, with the occasional, slightly cheesy and overexposed syllable riff thrown in for good measure (see the endlessly repeating "zhim-zhim-zhim bah nah" in Not Over You). More disappointingly, there is a tendency towards spontaneous rhythmic variation — including the now-requisite half-time/dubstep breakdown in a few instances — that seem inexplicable other than simply being in fashion these days. And in the case of Hopeless Wanderer, there's apparently no interest in being faithful to the feel, intent, or mood of the original song. Some might generously call that a "re-imagining" but even so, it has to make sense on its own terms. This version just obliterates the pulse and drive and spirit of the source material in favor of milquetoast blandness.

Now look. I say all this and you think, "Hey, he really hated this album." And that's not actually true. The 4s are legitimately good work even if I may still have my quibbles. And I'm a new fan of the Shadowboxers thanks to the closing track. So I'm glad I spent some time in Derbyhaus. There's no question these guys tried hard and the result is tuneful and earnest and yet, ultimately unsatisfying and a bit boring. But the Derbies have definitely taken a step forward. I can only hope that by the time their next album reaches me, they've taken many more.

I'm never going to not like the Brown Derbies. It's just not possible. Have you ever heard of the Pizza Cognition Theory? Conceived by Sam Sifton, Food Editor for the New York Times, it states that "the first slice of pizza a child sees and tastes (and somehow appreciates on something more than a childlike, mmmgoood, thanks-mom level), becomes, for him, pizza. He relegates all subsequent slices, if they are different in some manner from that first triangle of dough and cheese and tomato and oil and herbs and spices, to a status that we can characterize as not pizza."

The Brown Derbies are my pizza-cognition-theory a cappella group. Nightcap was the first a cappella album I purchased as a kid, after a performance at my high school (call me, Nick Moy!). The madcap Derby antics and trademark gritty guitar syllables paired with more traditional choral Ivy-league singing are my ur-all-male collegiate a cappella group. They are the reason I expect what I expect from this genre. That version of the Brown Derbies is hidden very deeply in Derbyhaus. You hear hints of it in a stray rough syllable, or in the selection of songs that you know would just kill at an arch sing.

My absolute favorite track on Derbyhaus is Honeymoon Avenue. Stripped of the stupid production gimmicks of Ariana Grande, it transforms into something plaintive and grasping. The voicing of the solo at the top of soloist David Cohen's range makes it yearning in tone, changing the entire experience. Nate Wardwell, the arranger, should get a lot of credit here for creating something out of a song I'd only ever previously heard as banal. Wardwell did the bulk of the arranging on the album, and this was the highlight.

I wish the rest of the album had been so transformative. The blend is, overall, just off in parts, but I get the feeling that the Derbies are comfortable with that (they've never quite "blended" the same way other groups do; it's weird). The remainder of the album just doesn't excite me in the same way that I think it could have had the Derbies taken a few arranging and production risks. (And by arranging and production risks, I definitely do not mean the bizarre dubstep break in the middle of Not Over You.)

I want more Honeymoon Avenues. I want to feel like that high school girl, listening to Nightcap over and over again, plotting her future in the a cappella world. The Derbies have the talent to get back there; they need to follow the threads they've found here and push forward.

If I had to give a one-word reaction to Derbyhaus from the Brown Derbies, it would have to be “simplistic”. The album is good, with solid performances and arrangements. Unfortunately, very few of the tracks are inspired. The arrangements often simply transcribe the original, the solos stick to the melody, and the creativity is somewhat lacking.

The biggest moment of euphoria comes in Telephone Message. Beyoncé’s Drunk In Love intro is very recognizable, and it is incredibly interesting and fun to see the guys change the lyrics to that of a voicemail greeting. It's a nice interlude between two of the less energetic songs on the album.

Unfortunately, while the album starts out with five strong tracks, it slumps after Telephone Message. In terms of style, Charlie Brown and Not Over You are two of the songs that should be keeping the energy high to offset the nuances and waves of the ballads. Charlie Brown holds its own, with a sweet solo and clean arrangement. When Not Over You arrives, however, it feels like you've driven to an intersection with all greens: the arrangement is trying to do so many things at once that none of it works.

One of the moments I enjoy most on Derbyhaus is the beginning half of Hopeless Wanderer. I am always a fan of groups taking liberties with arrangements, whether it’s the tempo, styling, changing it from minor to major, etc. Waiting until the end of the track to finally bring it up to tempo and bring in the percussion is a nice arrangement move, and allows the song to act as a true ballad.

Derbyhaus is one the group should be proud of. But looking forward, I would love to see more creativity in the arrangements, making way for a more engaging aural experience.