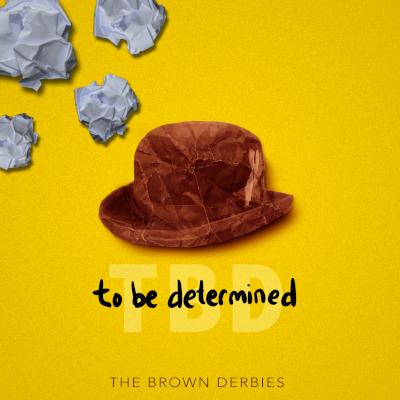 It's been a few years since I've listened to the Brown Derbies, and they've grown into exactly the group I imagined they would: rich tones, warm leads, contemporary covers, and an all-around pleasant listen.

There are some lovely details here: Be Alright / One Last Time begins at a whisper and then grows in volume and complexity; the layering of vocal lines in the last thirty seconds is really lovely (kudos to arranger and soloist John Rush). Stupid Deep highlights soloist Aakash Setty, who sounds so warm and perfect on this ballad. And a Lil Nas X tribute/parody Telephone Message, which is oh-so-perfect for 2019, ends the album in traditional Derbies fashion.

The arrangements here feature a lot of sustained notes and block chords; there are a lot of "ahhh" lines on Lost in Japan and Happier and a lot of examples of using the song's lyrics in extended chords as well. It's a traditional arrangement style, and it works to make the album feel cohesive (you know these songs are all by the same group, no question) but also a bit same-y. I was glad that the album was only six songs (plus a bonus ditty), since any more than that would have felt a bit repetitive and overdone. But keeping the album short and sweet actually works.

There's nothing overly complex about the Derbies' style, which this listener found comfortable like a well-loved blanket on a chilly night. If you're looking for unexpected arrangements and fancy studio tricks, then you'll have to look elsewhere. But if you want to hear a talented group of guys singing contemporary pop hits in a manageable EP length, then To Be Determined is a solid listen.

While trying to figure out how best to describe the latest release from the Brown Derbies, after a few pass-throughs of To Be Determined I've settled on "solid". I think this sums it up well — it's not an album that will change the landscape of a cappella in the next decade, but rather a well-produced yearbook album that the group should be proud of. That being said, if the group focused on a couple of aspects for the next album, it could move the Derbies into the next echelon of the a cappella community.

My biggest complaint is the blend between the parts on some tracks, notably on the track Happier. In the final chorus, with soloist Michael Saracco repeating the bridge motif in full voice and the background vocals matching that intensity, the main chorus line is overshadowed. I didn't even notice that line was being featured until maybe the third or fourth listen of the track, and even then I really had to lean in to pick it up. Even though the focus may be on the bridge motif, one should still be able to pick out the chorus fairly easily at all times if it's being sung. Earlier in the track, during the second verse, I'm distracted from Saracco's solo from the repeated inward snare/rimshot in the percussion line. I don't think using the inward snare was the wrong decision in this section, but I do think it needs to be dialed back a bit so that Saracco's solo has the chance to shine. Once the percussion transitions back to the outward snare, the balance issue seems to fix itself, so that's something to watch out for on future albums.

On a positive note, the group really has done a lot of great things on this album. In past reviews, it's been pointed out that the group had an overall lack of dynamics, and it's clear that the group has taken that criticism to heart and tried to focus on it for To Be Determined. Close Enough has a nice gradual build from the beginning to the end of the track, which is great. I do think that Be Alright / One Last Time could have benefited from a little bit more of a build, particularly when the track shifts to Ariana Grande's hit, if nothing than to differentiate the two tracks a little more. While all of the soloists are strong on this album, a couple stand out — Saracco on the earlier mentioned Happier, showing off his great chest voice belt in the bridge section, whereas Bastille's Dan Smith needs to go into his head voice in the original track. Contrast that with Aakash Setty, who delivers a beautiful, emotional solo on Stupid Deep that wraps up the album on a great note.

But, it's not the end — the Brown Derbies continue their tradition of Telephone Message, where they take a popular song from the last couple of years and turn the lyrics into a recording on an answering machine. It's a brilliant idea in general, and using Lil Nas X's Old Town Road as the backbone of the track — truly a perfect fit.

Overall, a good album from top to bottom for the Brown Derbies. If they continue to focus on dynamics like they have been and tighten up the balance on all of their tracks, they'll be on their way to releasing a 5-star album.

With To Be Determined, we take another trip to Brown University to listen to the Brown Derbies. When we last heard from the men of Rhode Island, I described the album as neither flashy nor deeply flawed. It was a simple "no problems here" yearbook album. With this latest installment, we have much of the same. This album is short and sweet but lacking enough depth to merit a longer look.

One of the hardest things for me to stomach about this album is the song choices. Television / So Far So Good presents itself as fun and bouncy but takes a hard left turn as the soloist's story eventually develops into a profanity-laden rant. I'd like to think that the profanity is what makes me hate the song, but in reality, it deals with the overall lack of arc in the song. There is no musical arc to this song. It starts at a mezzo forte dynamic, rises to a mezzo forte dynamic at the climax of the song and ends at a very peaceful mezzo forte dynamic at the end. This can be attributed to both the soloist and the group deciding the arc this story needs to take. If the profanity-filled breakdown is going to exist, perhaps it needs to sound as angry as the lyrics imply. To Be Determined is filled with monochromatic song arcs. As a listener, I had to go back and relisten to songs just to make sure I was actually paying attention the first time.

Close Enough finally presents a different story. From the first chords, it's almost obvious that arranger Amit Chakrabarti was more invested in this song. Perhaps it's because Chakrabarti is also the soloist, but the story is finally present here. There are little dynamic changes, too. The group uses silence in the opening to isolate the soloist and help him tell his story. There could still be more to accentuate the climax and present it as the high point for this song, but it's finally a stronger showing by the Derbies. This same idea exists in Stupid Deep, where Jon Bellion's original is dependent on the story arc to tell the soloist's innermost thoughts. Ben Michals's arrangement does a fairly solid job of letting soloist Aakash Setty tell his story, but again the climax isn't as big of a moment as we might have liked and it's over almost as soon as it begins. There are so many great thoughts that want to be expressed between these two ballads, but they never fully get their chance to shine.

With Telephone Message, we're brought back to the startling realization that the Brown Derbies might still just be a bunch of goofy guys hanging out and singing a few tunes. There might be a few moments that are almost profound, but this is a fairly straight-forward album. There are no major flaws, but there's nothing overly exciting either. Enjoy To Be Determined for the songs you know and maybe find a new one you didn't. It's a quick listen and good for a little smile.

To Be Determined streams on Spotify.