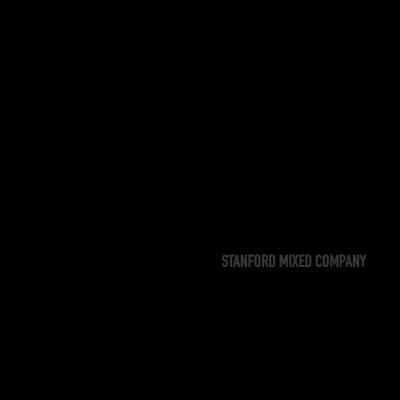 The last EP from Stanford's Mixed Company, UNDECLARED, was an invigorating, frenetic twenty-seven minutes of driving percussion, smart arrangements, and clever effects. With its follow-up EP, BLACKOUT, the mixed group has doubled down on a similar formula with slightly less effective results musically, even while offering a slightly more intriguing exploration of repertoire.

Leading things off with a Florence + the Machine song (Howl) just as they did on the previous release (Spectrum), Mixed Company maintains a dominant mixture of powerful drums, bass, and solo. Howl is a force, with pounding drums, a versatile solo from Virginia Steindorf, and a swirling atmosphere in Bill Hare's mix. And yet ... there is none of the mystery and less of the nuance which made Spectrum so engaging and memorable. In fact, this same comparison could be drawn about most of the tracks on BLACKOUT. With the exception of Grammy Award winning arranger (!!) Ben Bram's tight, crunchy construction of Clean Bandit's Rather Be, the songs feel more blanketed by that holy trio of percussion, bass, and solo than on UNDECLARED, with less emphasis on the elements of motion in the backing parts which worked so well on the last release. This combination of dark, heavy songs with heavy, less agile arrangements is not a bad thing necessarily, as it creates a consistent aesthetic across the EP. Yet each time I finished the eighteen minutes of music, I felt a little like I was coming up for air. With the exception of the space Bram provides in the arrangement for Rather Be, the only other chance to breathe is in the charmingly distinct cover of Alt-J's Interlude 1. Only 73 seconds long, this duet is utterly unlike anything else on the EP. I wondered, briefly, whether I would prefer it if the group had tried to set some musical atmosphere underneath the duet, but I think that would have deprived the song of its value in this collection.

Another distinguishing aspect of BLACKOUT is the presence of an original song, Tell Me Why It Hurts, written by group member Nate Nunez. The song has a recognizable arc, a catchy chorus, and a rhythmic style otherwise absent on the EP.

To be sure, the inclusion of two non-traditional elements on a college album (a bare duet and an original song) would be an exciting development even if both songs weren't well-executed (which they are). Mixed Company's strategic decision to search outside the safe confines of familiar pop covers is the most notable aspect of this EP. So, while the group clearly does well with bass and drum-driven arrangements, I consider BLACKOUT a promising step forward from UNDECLARED, even if it doesn't quite match up musically.

BLACKOUT by Mixed Company from Stanford University features six high-energy, well-produced tracks in a single EP. With the help of guest arrangers and an original composition, BLACKOUT showcases the diversity of the group's talent and its ability to successfully execute a wide range of selections. Still, this EP does not reach the dynamic of Mixed Company's last EP, UNDECLARED (which I also reviewed); while BLACKOUT is solid, it does not quite match up to the outstanding result of UNDECLARED.

Based on past projects, the element that has been a constant for Mixed Company projects is the level of production. From the vocal effects attached to higher voices, such as in Rather Be, to the processing of percussion in the opening of Addicted To You, the music feels so surreal that it is truly creating a story. Each song manages to have its own identity and not mimic the exact techniques of the preceding track; this is attributed to the superb work of both Russell Kamp and Bill Hare. My only criticism with production is that the bass can be a bit too heavy or overpowering, such as in Howl and Like a Drum. Call it a preference, but I feel that the higher voices are doing such a great job that they could use a little more of the spotlight.

BLACKOUT also demonstrates the sheer prowess of Mixed Company's group sound. Each track (excluding Interlude 1) showcases careful support by the backing singers to boost the lead, and the group never underperforms a song. Addicted To You is a testament to this, as the song has such a varying dynamic simply within the first two verses. One example is the contrasted usage of simple syllables such as "ha" to help create large shifts in emotion. Rather Be is also a great example of group balance with varying rhythms, and the ability of Mixed Company to create the original synthpop texture through various techniques incorporated by the percussionist.

What is truly commendable is the inclusion of an original composition in Tell Me Why It Hurts. The song features a nice choral opening, which is quickly followed by a strong groove and beat that manages to stay steady throughout with solid lyrics.

While BLACKOUT is good, I don't ever feel surprised by the album. The arrangements fit the voices well, but creatively I could have used something unexpected from Mixed Company. In addition, I am a little perplexed by the reason behind releasing two EPs back-to-back: I know many aspects affect this decision, from funding to album material, but if there is chance to produce a full album, I believe the group is ready to do so again.

It seems Mixed Company has found a level of comfort in its studio work: the group sound is phenomenal, but I'd like to see Mixed Company continue to push its creative limits.

BLACKOUT by Stanford's Mixed Company features brilliant and compelling arrangements and inspired, powerful soloists. With the group's previous release, UNDECLARED, the tracklist pandered to the more overplayed songs of the past several years. But with UNDECLARED, we get a diverse mix of songs from Florence + The Machine, Avicii, alt-J, Clean Bandit ft. Jess Glynne, and Guy Sebastian. The production work by Russell Kamp and Bill Hare is clearly a perfect match for the level of talent that Mixed Company brings to the microphone — and oh, does it show.

The album begins with a raw, intense interpretation of Howl by Nor'easters alumnus, Shams Ahmed. Ahmed's arrangement, combined with an impressive delivery by Virginia Steindorf, expertly captures the passionate nature of the original. The energy continues with Addicted To You, featuring clever and intricate arranging by Nate Nunez and Maggie Goulder. Interlude 1 is an exact transcription of the alt-J original featuring only Nunez and Tim Hegedus; my only wish is that Mixed Company had taken the song and made it their own. Unfortunaetly, there isn't much separating this track from the dozens of other covers just like it.

As mentioned previously, my only objection with UNDECLARED was the overplayed tracklist and yet, I absolutely adore Rather Be. The simple fact that the track is arranged by a cappella superstar, Ben Bram (Pentatonix, The Sing-Off, Pitch Perfect 1 & 2), definitely doesn't hurt. Inventive arranging by Bram and a solo performance by Adielyn Mendoza (that would honestly give Jess Glynne a run for her money), combine to make this one of my favorite covers of Rather Be. BLACKOUT concludes with an elaborate, albeit energy-lacking, version of Like a Drum by Australian Idol winner and singer-songwriter, Guy Sebastian. One of my favorite aspects of a cappella is hearing songs similar to Like a Drum and thinking to myself: "How in the world am I just hearing about (insert artist's name here)?" So thank you, Mixed Company, for introducing me to this fantastic artist.

If you haven't already heard BLACKOUT, I highly recommend it. Keep up the truly inspiring work!