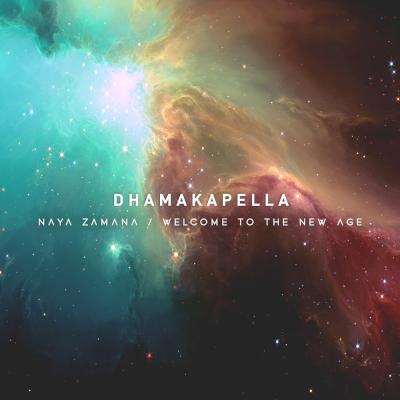 Dhamakapella is a coed South Asian fusion group from Case Western Reserve University; the group was founded a decade ago, and Naya Zamana / Welcome to the New Age is its second album.

The group's very premise is challenging: to blend together Western pop songs with Eastern melodies — songs that may or may not have anything audible in common, from pitch to tone to key to tempo. Certainly, it's the responsibility of the arranger to bring out the similarities to make a cohesive arrangement, and there are a few songs here that work really well. On Halo / Iktara, the Eastern song has a tempered somberness that complements the Beyonce track, and the Eastern backing lines on Pushing Me Away / Woh Lamhe add an interesting texture to the Linkin Park song.

But Dhamakapella still struggles with the same challenges the group had on its first album, Pehli Nazar — First Look. Specifically, putting together medleys isn't the easiest task; songs need to fit together to make a cohesive whole. Dhamakepella sometimes falls short in that regard. On Saiyyan / A Thousand Years, the tender first verse shifts abruptly into A Thousand Years, and the arrangement is a bit jarring, even though both individual components sound fine on their own.

Hip-hop is one of the trickier Western genres to incorporate into a South Asian fusion medley. The challenge with all of these arrangements is to blend a song whose lyrics are familiar to the audience with a song that most listeners have likely never heard before, and to tell a story between songs where one is not familiar to most English speakers. Hip-hop tracks present a more intense challenge: since most hip-hop songs rely exclusively on lyrics, the juxtaposition with a song whose lyrics are completely indistinguishable to English speakers can lead to some jarring transitions. Both Dark Fantasy / Teri Meri and Can't Hold Us / Aahun Aahun suffer from this abruptness.

Not every song here is a medley. Jiya Lage Na is a beautifully-performed song that conveys emotion even without any English lyrics. That track in particular is a nice reminder that Dhamakapella doesn't need to rely on familiar or common songs to produce a recording that sounds beautiful and captures the song's emotion. As for the rest of Naya Zamana / Welcome to the New Age, while there are some tracks — or parts of tracks — here that sound lovely, the group will need to spend more time in the future hammering out which Eastern songs go best with which pop numbers, and working to produce songs — medleys or not — that give a full, clear story arc.

Before you ever listen to a moment of Naya Zamana / Welcome to the New Age, the second album from Case Western University's Dhamakapella, you have expectations. By crafting a title that contains both Hindi and English, the group has conveyed that this is an entry in the rapidly growing field of groups performing South Asian mashups with American or British popular music. With the actual title of the album, Dhamakapella has put in your head the idea that you are entering a new age of global, amalgamated music. The former fact is indisputable; the latter is not.

To clarify, Dhamakapella has a strong entry into the South Asian fusion a cappella market with New Age thanks to solid arrangements with seamless transitions and stellar production from Liquid 5th. What the group does not quite have is anything groundbreaking, as groups like Penn Masala have been innovating and establishing goalposts in this category for years.

That being said, Dhamakapella does appear to have improved markedly from its debut album, Pehli Nazar — First Look. I have not heard the album, but the group seems to have addressed some of the prior reviewers' criticisms — beginning with the fact that New Age features two songs which are not mashups but rather pure Hindi covers, and both are very strong. The group has also found a way to smooth the creases in its mashups, weaving themes and elements from each song throughout the other in a way that is neither jarring nor unpleasant. In fact, I really enjoy the way arranger Mayank Prasad begins Halo / Iktara with the recognizable arpeggios of the former and a female melisma from the latter.

Unfortunately, not every such decision works with equal effect. In that same tune, for example, the decision to change the beat a bit and push the tempo gives the song a rushed feel. Similarly, chopping up and spacing the articulations for the Dark Fantasy portion of that mashup does feel jarring. The rap is fine, one of the most energetic moments on the album, but then the female solo who follows comes across as timid. Whether this is by comparison or simply de facto is ultimately irrelevant; the result is underwhelming. The Can't Hold Us / Aahun Aahun mashup is even worse, with some weird if not outright incorrect harmonic choices and moments where the whole song feels like it is moments from falling apart.

Back to the good news, though, which really applies to most of the album. One word which repeatedly came up in my notes, and a word which I really love to use when it is well deserved, is "atmosphere". Radioactive / Jiya Jale / Dil Se Re / Ae Ajnabi has some great swirling textures, Saiyyan / A Thousand Years is simple but lush, Pushing Me Away / Woh Lamhe builds on crisp percussion and builds momentum in a way which is both old fashioned (syllables) and modern (panning, buzzy production). Carl Taylor's mixing throughout is extremely effective, at times using tools to highlight or transform vocals and other times creating a vast and aurally pleasing space.

Soona Soona, one of the non-mashups on the album, takes the listener on a journey and deserves special mention, in particular the terrific vocals by Neha Dwivedi and Sahaana Sridhar and the "Indian VP" by Anoop David. Also deserving of praise is percussionist/beatboxer/all-around beast Rahul Chander, who alternates between mouth drumming and beatboxing with abandon and efficacy.

There's no question Dhamakapella has taken bold steps forward in its own evolution with Naya Zamana / Welcome to the New Age. If the group can avoid some of the poor arranging choices and add a shot of energy to the vocals going forward, it may well be a group that can introduce us to things we've not heard before.

Following on the heels of its single release comes Naya Zamana / Welcome to the New Age, the sophomore album from Dhamakapella, Case Western's pop-Bollywood fusion group. Whether a lucky byproduct of the group's choice for the single, or a conscious reminder for the group, this album does indeed usher in a new age for the group; Dhamakapella has grown since its debut album.

Many of the standout tracks on this album are noticeably upbeat, energetic numbers. The album closer, Sadi Gali / Party Rock, is a great example of how Dhamakapella succeeds in this genre. The mashup is cohesive; the songs flow together smoothly both musically and thematically. The group has a ton of energy from the get-go, but the arrangement leaves itself room to grow and progress. Everyone, including the engineers, seems to have had a ton of fun making this track. Special credit should go to Samir Shah, whose lead carries most of the drive of this track as well as Dark Fantasy / Teri Meri. Not to be outdone, though, many female leads also step forward on some of the higher-energy tracks, and deliver convincing performances for their own portions of the rap segments, especially Aditi Bhanja on Can't Hold Us / Aahun Aahun and Sahaana Sridhar who backs up Shah on Sadi Gali / Party Rock.

The thematic aspect is important to consider. When the album was sent to reviewers, Dhamakapella included a packet with lyrics and translations. I don't know if the group does this for every purchase, but it would be well worth it considering how specifically (and cleverly) the lyrics within mashups tend to fit together. Especially since there are a few that rely too heavily on a thematic, rather than musical, fit. Saiyyan / A Thousand Years stood out the most in this respect. The jumps between the two songs are more disjointed, and I had a hard time finding a groove for the track. Without easy access to the Bollywood lyrics, I don't know that I would understand why these two songs had been forced together.

This issue is somewhat related to what I see as one of the major weak areas remaining for the group: the drop in emotional engagement that occasionally occurs when the group shifts to English. This was pointed out by fellow RARB reviewer Kyle Yampiro in his review of the opening single. The problem shows up in some other places, though, and most frequently in the male leads (Can't Hold Us / Aahun Aahun, for example). It is also pervasive in moments where the group backgrounds are given unison lyrics in English. They frequently come across as stiff and over-enunciated. Some work on these two issues would help Dhamakapella have even more general appeal. Already in most of these tracks they show a real ability to make the Bollywood music and style instantly approachable and relatable even to new listeners.

My one other small gripe is on Halo / Iktara. For lots of reasons (clever arranging, strong solos, interesting dynamic moments) I want this to be my favorite track, and there's only about 5 bpm standing in the way. I don't know why this was sped up slightly compared to both original songs, but it just feels rushed in a way that I can't get past. Maybe it's a small thing to harp on, but I keep going back to listen again wanting to like it more, and every time I end up wishing it had been just a little slower.

I won't bother going through all the other aspects in detail, suffice it to say that across the board this is a strong showing from Dhamakapella (and Liquid 5th Productions, who mixed the album). It's a ton of fun to listen to, and I've already set many of these tracks aside for future dance parties. (No comment as to how many happened during the writing of this review.)

To order a physical copy of the album, visit www.dhamakapella.co/album.