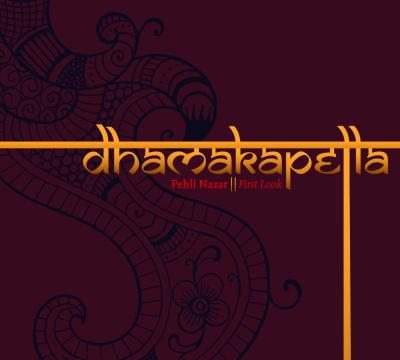 Dhamakapella's website tells us that the group's vision is a fusion of Bollywood and American music, and true to that ideal, its first album, Pehli Nazar — First Look is a non-stop medley of East and West hits. Unfortunately, the mashup itself seems to be the dominant arranging choice. Once that's expected, the album feels more utilitarian than expressive.

The unique vocal flips, melismas and haunting scale forms of Indian music are by far the most interesting elements of the group's debut. Listeners will want more. Much more. The near complete lack of dynamics, pervasive predictability, and perfectly fine, but not spectacular soloists leave the listener to mentally wander, desperately scanning for the important, interesting, or unexpected, often to no avail. Only the authentic Indian elements ever truly capture our attention.

The American elements are far from unlistenable. They are fine: usually in tune, mostly in time (though leads often fall somewhat "out of pocket" as far as groove goes). But as mentioned, the album as a whole comes up lacking, not particularly for want of technical accuracy, but rather for lack of dramatic moments. Without these, we can appreciate our friends singing melodies we know, or block chords that form expected progressions; we can even appreciate the unifying choice to medley every track on the album. But this isn't enough for us to give our hearts away. We like Dhamakapella, but we just don't "like-like" them.

The credits are both more and less than listeners deserve. The paragraph-long descriptions of what each track means to the group are a throwback to jazz age vinyl record jackets of the 1950s and '60s. This choice is cute, but largely superfluous, especially since comments such as, "Clocks is about helplessness in the face of time" seems to conflict with the liner notes' banner which reads, "Fusion believes that song interpretation is up to the listener". Precious liner notes space would have been better used on more complete credits. While we do learn the identities of soloists, arrangers, and group leadership positions, not a single composer is ever named.

Pehli Nazar — First Look has some elements that shimmer, but for its second look, Dhamakapella must present these elements with creative, supportive arranging and exciting dynamics. The group must devote serious attention to matching soloists with the songs that best suit them, rather than seeking soloists for the demands of an already chosen song. The merger of East and West is a compelling artistic concept and one that Dhamakapella is uniquely suited to present, but First Look is still a somewhat hazy image of this noble vision.

Case Western's Dhamakapella makes a bold statement in the liner notes to Pehli Nazar — First Look: "We don't just cover songs — we strive to reinvent them." The group takes a unique approach to back up that assertion: this album is a collection of ten medleys of English-language pop hits and Bollywood songs.

One thing is for sure — this group has put a tremendous amount of thought into its music. The liner notes describe each medley and how each song complements (or contrasts with) its partner. (This actually makes for a fascinating read — it's always interesting to learn what a group hears or chooses to emphasize in a given song.) With the album that was sent to RARB, the group included a detailed lyric translation for the Bollywood numbers.

Musically, Dhamakapella hasn't set out an easy task, because medleys are difficult to arrange and even more difficult to execute compellingly. Still, when Dhamakapella is on, the group absolutely hits it out of the park: the two songs for Ishq Kabhi Kariyo Na / Naughty Girl blend together so seamlessly in tone and sound that they sound like the same song. It's this cohesiveness that I wanted to hear on the rest of the album. The group comes close sometimes — Kal Ho Naa Ho / Clocks and Airplanes / Tujhe Dekha To are both quite good — but they just don't quite nail it.

The problem for the group isn't its musicality. On many of these tracks, each individual component sounds good (to be quite honest, I loved a lot of these Bollywood numbers — Barso Re is one of my favorite pieces on the album). Dhamakapella just hasn't figured out how to put the two components together in a smooth, cohesive way. The problem with Fallin' / Barso Re is the abrupt tempo change from one piece to the next; the arrangement of Eleanor Rigby is equally jarring on Khuda Jaane / Eleanor Rigby. The two pieces on Down / Deewangi Deewangi are similarly ill-matched: one is mellow and laid-back while the other flutters with energy (and handclaps!). I want to hear more passion from the group — neither half of What Goes Around / Chura Liya oozes the urgency that the lyrics express.

Ultimately, though, the challenge that Dhamakapella faces is no different from any other group that attempts a medley — it just feels it more acutely because it has to face this challenge on every single song. This is a group that has an explicitly well-defined approach and a well-thought-out analysis to go with its song selection, two traits that are not always obvious in collegiate groups. Dhamakapella just needs to figure out how to step up its execution.

This is a perfectly clean album. It's nice, well engineered, and generally well sung. Dhamkapella's musical modus operandi is true to its name — the album's liner notes indicate that even the name of the group is a mashup of "dhamaka" (a Hindi word for "a hard, resounding noise") and "a cappella" (a word that ... well, if you don't know what "a cappella" means, you should probably stop reading). The album comprises ten tracks that are all mashups of English and Hindi songs with either similar or contrasting themes. It's an interesting concept that I'm not sure other groups who sing in this genre ever use. On Pehli Nazar — First Look, it has differing levels of effectiveness — sometimes I hear what the group was trying to do (the group explains its intent with each song pairing in the album liners), and sometimes it sounds like Dhamakapella simply abutted one song with another.

Fallin' / Barso Re is indicative of this problem. The group's explanation for why these songs are paired with each other is not because of any inherent thematic, musical, or even tempo-related similarities (one is a slow 6/8 piano ballad and the other a driving, 4-to-the-floor Hindi dance song). Apparently these songs are together simply because the soloists are the ones that "carry" their respective songs. That's where the similarities end. While the transition between these two is well worked, some others are jarring and uncomfortable. The transition in Down / Deewangi Deewangi from song one to song two doesn't even sound like it's in the correct tempo until we lock into a few measures of the second song, and it makes the album sound wrong. Each of the individual songs is okay, and the addition of a South Asian groove under Down adds a fun new dimension to the song. Together, though, they don't add to each other, and instead detract from each other. The closer, What Goes Around / Chura Liya also deserves mention because it is simply too long. It's essentially the entirety of the Justin Timberlake original with a section of Chura Liya dropped in the middle. At almost six minutes in length, it's just a little too much.

Other than song (combination) choice, there's not much to say about the album. Nothing is particularly noteworthy outside of some cool (if inconsistent) production work from the guys at Liquid 5th. The FX on Airplanes / Tujhe Dekha To are pretty sweet, and help make transitions in the song flow and remain interesting. But they're immediately preceded by some noticeably bad splicing and Melodyne-mangled breaths in the unaccompanied intro to Fallin' / Barso Re.

My main quip with the production, though, is the mastering on this album. Sonically, it's fine — relatively clean without sounding sterile. However, there are sometimes up to seven or eight seconds between the end of one track and the beginning of the next. I found myself wondering at the end of every track, "Okay ... and?". Each track has at least four seconds of silence at the end, and then iTunes or my car's CD player switches to the next track and I'm greeted by ... another three to four seconds of nothing. I honestly can't get a feel for how well this album would flow if the songs were properly spaced.

Perhaps it's just because I've worked on an album in the same genre (Hindi/English mashups) recently, but I don't feel like Dhamakapella is bringing anything particularly new to the table here. I like that the group is trying to tell a story, but I question how appealing the concept is to the average listener. As a reviewer, I was provided with an eleven-page packet of lyrics and translations of all of the songs in foreign languages, but do buyers receive this? If so, that's probably a wise idea, but for those of us who don't speak multiple languages fluently, having to sit with a packet to listen to an album doesn't really help the experience. I'd rather be transported to a mood in a musical sense than have to be told what I should be feeling by a piece of paper.

On the aforementioned album I worked on, there was one song that was about sex. The whole track was full of "ooh"s and "uuuhhh"s and guttural sounds that really didn't need a translation. It made me feel something (even if "something" was occasionally "uncomfortable"), and there wasn't any question of what was happening, even if I didn't understand the lyrics. If they want to make an album that has a greater impact next time around, Dhamakapella should concentrate more on expressing the story the singers create, rather than expounding on it.