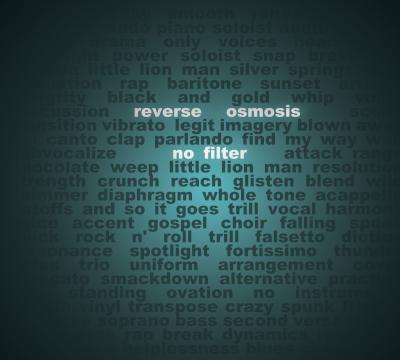 The most musically interesting moment of USC Reverse Osmosis's No Filter comes in the last thirty seconds of the opening track, Find My Way. The coed group isn't doing anything that you haven't heard barbershop quartets do a million times before, but those beautiful chords and tags are highly unusual for a collegiate pop/rock group and add an unexpected jazzy element to an otherwise standard rock cover.

There is one other such unusual arranging twist on No Filter: the mash-up of Fallin' with Take 5, the jazz piece recorded by the Dave Brubeck Quartet in 1959. Take 5 adds an interesting texture to the Fallin' bridge that gives Reverse Osmosis an opportunity to put its own spin on the Alicia Keys song.

Unfortunately for listeners craving more such unusual moments, the rest of No Filter is fairly standard collegiate a cappella. There are some highlights, for sure — Tegan Robinett's solo on Silver Springs is lovely, and the laid-back, breezy arrangement works beautifully for the song. But other tracks here — such as Blown Away and Starlight — while technically solid and well-performed, aren't enough to be memorable or set Reverse Osmosis apart from other collegiate groups. Furthermore, the inclusion of And So It Goes in the middle of the album is baffling: the track was recorded separately from the others (live) and disrupts the aesthetic of the rest of the album.

All this makes No Filter a somewhat frustrating listen: the two most unusual tracks here show that Reverse Osmosis has the potential to be doing something truly unique in giving a jazz flair to its pop/rock repertoire. But the group doesn't capitalize on that enough, and the inclusion of an oddball live track drags No Filter further into the generic collegiate a cappella zone. There are a few tracks that are absolutely worth hearing here, but the rest is fairly standard fare.

There's so much going on to sell this album. The song variety alone is enough to keep listeners entertained; the balance is met between having a good selection of rarely-covered material and some familiar tunes to appeal to the general crowd. Even though And So It Goes is popularly remembered in the a cappella for the Chilcott arrangement (which the group pays homages too), the reconstruction created by Reverse Osmosis is a new experience that stands a head above. In addition, 15 Step is probably the best a cappella Radiohead cover that I have ever heard. Preston Walker has an exceptional vocabulary for vocal percussion, and a fantastic mind for arrangement composition and Tyler Mann excels in what is easily the strongest solo of an already powerful soloist collection. The percussion is particularly great, because unlike 95% of collegiate productions, I can tell it's a human mouth and not a drum kit. Excellent work by the production team keeping the voices real across the board.

While we're on the topic of percussion, I'm happy to say it finally happened: a group I reviewed finally credited the percussionists! Sweet Lordy, hallelujah! I only wish the rest of the liner notes finished out better. "Written by" is an excellent form for crediting, but if you switch back and forth between the actual writers and the band names across songs, it looks like you weren't paying attention, or worse, were too lazy to look up who was in the band.

What's weaker are dynamics. There's a static mezzo forte dynamic across the first three songs that lingers throughout, and it doesn't really go away until the last two songs of the album. For the minimal production involved, I'd certainly hope for a better-shaped product. The majority of the arranging is partly to blame for being direct transcriptions of the originals. Even the medleys are exact duplicates of the originals mashed together without rhyme or reason.

What's bad is the killer on this album: a massive lack of involvement and intention on most of the songs, and individual lines completely checking out on their descants. The sopranos in particular are the guiltiest party, with phrases that are completely detached from word to word. They sap any energy building up and then fall just under the top pitches. I can't put my finger on the culprit, but why does an album with 24 contributing members have such an empty sound in the ballads? It's as if their concept of the word "soft" means lacking presence, instead of controlled intensity.

A couple of standouts are enough to endorse picking up No Filter for a casual listener, but diehards are less likely to be impressed with what they get.

No Filter, the latest release from Reverse Osmosis, is an album that I find frustrating in a couple ways. Hopefully that doesn't sound too harsh, since they're not all ways that reflect badly on the group. In my reviews, I usually want to start with some pointers and build up to the good stuff, but in this case so many of the positives and negatives go hand-in-hand that it's hard to tease them apart.

Reverse Osmosis has a number of great singers, and No Filter especially features some really powerful solo performances (standouts include Divya Maus on Blown Away and Fallin'/Take 5 and Matt McFarland on Starlight). At the same time, though, the arranging style on some tracks can make their performances feel at odds with the rest of the group. Black and Gold is an excellent example of this — Michael Alfera delivers a take on the Sam Sparro song that's more emotional than the original, but when his solo is layered on top of a near replica of the original recording, it just doesn't fit.

This issue isn't restricted to solos. In some ways, the delivery of many background parts comes across as very choral. There are times listening to the album that I find myself picturing the group in perfect "choir stance". Tracks where the arrangement plays to this more, like Helplessness Blues, work in the group's favor, selling a more classic tone and sound. On something like Blown Away, though, it's out of place; the big moment coming out of the bridge (beats dropping with explosive backings) should work for the song, but instead of really letting loose, the group sounds too clean and reserved.

The most succesful tracks are ones where Reverse Osmosis really adapts songs to fit its style and sound. Silver Springs is another nice example of this, as well as the jazzy adaptation of Fallin'/Take 5, which layers the Alicia Keys hit over a scat version of the jazz classic. The group hints at this musicality in its opening track, Find My Way, tacking on a 30-second, barbershop-style tag at the end. Again, though, this feels out of place to me as a conclusion to the rest of the arrangement.

Ultimately, I have a hard time really getting into a groove with this album, since many tracks don't feel completely cohesive the entire way through. There are moments that I absolutely love and moments where I don't really understand some of the group's decisions stylistically. No Filter feels a little unfocused — the group should clarify what it wants its sound to be on future recordings, and what it wants to convey with each arrangement.

No Filter is available on Bandcamp.