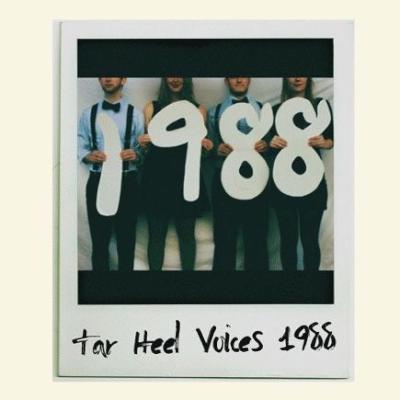 Tar Heel Voices's latest album could perhaps be seen as an homage to its founders and/or a recognition of the legacy that has been passed down over the last 27 years. Unfortunately, it just hammers the point that this group seems to have been stuck in neutral for quite a long time now.

"Neutral" is actually a pretty good word to describe my overall reaction to this release, which features twelve songs of generic a cappella "OK-ness". That is, there's nothing abjectly terrible here, but also nothing remotely thrilling. There is some slightly unexpected repertoire — Slip and Porcelain to name two — but also the umpteenth version of Chandelier, Counting Stars, and that old chestnut I Can't Make You Love Me. There are a handful of solos that stand out for their guts and grit, but there are as many or more that are unremarkable beyond their basic pleasantness and accurate singing. In all, precious few highlights, a few low lights, and the rest is just kinda "there".

As has often plagued THV in the past, arrangements and energy can be targeted as the most responsible culprits for this mediocre offering. Though the arranging work is spread over quite a few members of the group, the techniques mainly revolve around three primary motifs: 1) Running eighth notes. Sometimes sung by one voice part, sometimes split between voice parts, but either way, it needs to be used far more sparingly to avoid the monotonous drone that is the downfall of Counting Stars and others. 2) The big block chord. Certainly something that can't be avoided, but it needs to be employed with purpose, be it for contrast (to a more rhythmic section) or for effect (at a climactic moment) or in tandem with dynamics (for a sudden quiet or unusually loud moment). Block chords with vocal percussion and bass is an adequate approach to arranging, but it will rarely, if ever, sustain interest for more than a piece of a song and is a lazy substitute for building and removing layers of texture in the background voices. 3) Word echoes and/or backs singing harmony with the soloist. This is another technique that is common and some might say unavoidable. But again, it's all about when, where and how much. Bonus fourth note: please be careful with employing imitative a cappella syllables. They can be cute sometimes, and they can be effective if used within a larger rhythmic/harmonic pallette and/or with some effects that help them resemble the instrument they are attempting to replicate. But a naked, exposed — and hyper-enunicated, in this case — a cappella syllable like the "ja-jin-jah" in Find Me or the "wadda" horns in Can't Take My Eyes Off You are going to stick out like a sore thumb.

Energy is a harder to thing to pinpoint and quantify, since I have little doubt that physicaly and emotionally, THV pumped a great deal of energy into this effort. Sadly, it just doesn't come through. In some instances, it may be the repertoire and/or arranging and/or tracking choices — Hey Brother comes to mind, as this is already a DJ track and the rendering here feels palpably gridded and thus, almost robotic. Whatever energy was put forth in the performance is lost in translation. In other cases, the arranging may not be doing the group any favors. Witness Slip, which is a track I want to be so much better than it is. It's a song that cries out for rhythmic development and ornamentation in the chart to match the passion and energy of Casey Hribar's solo, but instead we get essentially the same rhythmic motif throughout. Bouncy and enjoyable to be sure, but a missed opportunity nevertheless.

To be fair, THV may be perfectly content singing songs they like, and churning out albums that memorialize their efforts and are destined to make family members proud. As the group approaches its 30th anniversary, I personally continue to see flashes of them being capable of more. So selfishly, I would love to see Tar Heel Voices take the next step and rise to the occasion.

1988: The Amusement Park album. A park with thirteen rides, built with the finest steel and decorated with the brightest paints. Tar Heel Voices is North Carolinian collegiate co-ed fun for all ages, so step right up and listen today!

For your streamlined entertainment, this amusement park features just two basic types of rides. First there are the roller coasters. The songs like Islands and Say Something that start slow and easy, crawl up a spine-tingling mountain of woeful chords and dramatic lyrics, then hurtle into a climactic rush of loudness and emotion. Those are a blast.

The other type of ride is something that spins you around really fast so you can barely stand when you get back to solid ground. Songs like Hey Brother and Can't Take My Eyes Off You fall into this category. They have one upbeat tempo and a familiar poppy melody that wakes you up from the get-go but doesn't really have any surprises along the way.

The park is laid out for a very regular cadence (roller coaster, spinny ride, roller coaster, spinny ride, etc.) until the very end. Holding On To Good breaks the mold with a less conventional, more narrative structure that tugs your emotions unexpectedly to and fro. It requires a little much more attention for an experience that feels that much more gratifying. It's like the river rafting ride.

The main attractions here are Chandelier, Slip, and Porcelain. Chandelier and Porcelain are roller coasters. Chandelier could easily have been spinny, but Josh Altman cleverly cuts the quirkiness and percussion from the beginning to capitalize on the power of the later choruses. Porcelain sounds just like Fix You, so if Coldplay was your jam five years ago then say hello to Marianas Trench!

Slip is a spinny ride. Catchy, spunky, simple. Of all the rides at the park, this has the cleanest arrangement without sacrificing any of the pizzazz.

What detracts, if only slightly, from the rest of 1988 is the cheese factor. There's something inherently cheesy about an amusement park that can wear you out before you try all the rides. For Tar Heel Voices, it is the excessive complexity of the background syllables and lyrics. Singing chords with two random words from the solo of I Can't Make You Love Me and punctuating the choruses of Find Me with "jah jin jah!" don't really add any power to these moments. Rather, they distract from the mood and remind you that while it may be exciting, an amusement park isn't made of the same stuff as real life.

What was that about the steel and paint? If you're not sold on roller coasters and spinny things, just check out 1988 for the singing and production. The backgrounds perform riveting dynamics, and all the soloists sound like they're ready to be the next YouTube sensations. That's the steel on which the park is built, and Liquid 5th Production coats every inch of it with an inviting vibrance and precision. Forget Six Flags and Disney World. 1988 has all the mesmerizing amusement value, with none of the lines.

1988 opens with a beautiful rendition of Sia's Chandelier that grabs my attention from the very first chord. The choice made by the arranger, Josh Altman, to start the track with the background vocals singing the chorus before the solo's entrance on the first verse works very well, and I enjoy the staggered Chandelier entrances in the upper voice parts right before that solo entrance. The soloist, Yasamin Haghshenas, delivers a very engaging and powerful solo that really keeps with the mood of the arrangement from start to finish, which starts off more somber and reserved than Sia's version, and Haghshenas really embraces that with a more subdued solo in her lower register in the first chorus. The arrangement then builds with the additional verse and pre-chorus, before completing the journey with that intensity and desperation that we are more familiar with from the original song. The combination of the arrangement and the growth that the group shows throughout Chandelier had me repeating the album's opener over and over again.

After this track, though, nothing else here has that "wow" moment, as the group seems to stray away from creative liberties and instead creates arrangements that match the original artists' renditions. This is not to say that the rest of the arrangements are bad — there are a lot of strong solos across the entire album, especially from Cressler Peele on Counting Stars and Mary Alice McMillan on Islands. All of the tracks are also very rounded with full bass and percussion, with the help of the production added by the group at Liquid 5th Productions. Still, I would have liked to see a continuation of the creative moments that Josh Altman demonstrated when arranging Chandelier.

The group also gave Chandelier much more attention to emotion and dynamics in an effort to tell the story, which I definitely appreciate and it really adds to the strength of the track. In some of the other tracks, such as Can't Take My Eyes Off Of You and Can't Make You Love Me, the attention to detail isn't present. In both of these specifically, there isn't as much of a contrast in dynamics and energy, which causes them to fall a bit flat. With the former, I would have liked to see that the verses (especially the 1st verse) were a little on the softer side, so that when the chorus comes in, you get a much more powerful result. Instead, it sounds like the same dynamic level the entire song, which makes for a boring track, even with the strong vocals from Peyton Chance on the solo.

Finally, Tar Heel Voices could have paid a little more attention to the liner notes, as there are a number of misspellings in the names of the original performers. Specifically, a number of the "As Performed By" artist's names are spelled incorrectly, such as Frankie Valli and Christina Grimmie.

From an overall standpoint, it's a decent album to listen to and enjoy casually. A few more tracks like Chandelier, though, and Tar Heel Voices is going to quickly become a group that you're going to want to keep an eye on.

Digital copies of 1988 can be bought online on iTunes, or for physical copies please email the group at TarHeelVoices@gmail.com.