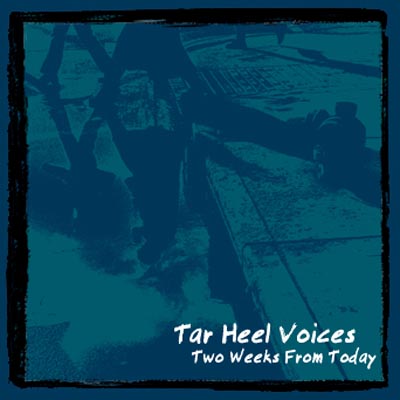 The Tar Heel Voices from the University of North Carolina at Chapel Hill have presented the a cappella world with an 18-track album that goes from good to bad to great to ugh. What I found — let's call it "unique" — about this album is that they were able to reach all of those extremes over the course of individual tracks!

The album opens with a fairly solid rendition of Boyz II Men's Thank You, not to be confused with Thank You by Dido which comes later on the album. The percussion drives this song well, and the energy is pretty good, until the "Da-Da" breakdown section when the song kind of falls into a lull. The percussion drops out, and it's as if the voices are bored silly singing this song. No energy, pitches start to slide, and the overall drive of the song is lost. This is an example of where I wanted a lot out of the vocals from this group and just didn't get it.

The other major victim of the lack of background vocal energy on this album was Like A Prayer. The background vocals never live up to expectations on this song. The soloist doesn't help matters much either. Can a collegiate a cappella group, ANY collegiate a cappella group, please record this song with some nuts? I'm not a big Madonna fan, but this song is one of those that is supposed to just rock out. I have yet to find a group that can do this song justice, and I'm beginning to think that there isn't a group that can/should perform it at all anymore. Just looking at groups that I've reviewed in the past that have attempted this song: The Harvard Callbacks have failed, the Cornell University Class Notes have failed, and now you can add the Tar Heel Voices to the list of failures. (Side note: I hereby challenge any collegiate a cappella group to send me a recording of Like A Prayer that has background singers with enough moxie to pull it off. There will be a special prize for any successful group.)

As I alluded to in the opening, there are plenty of good moments and tracks on this album, too. Dido's Thank You is a fantastically simple arrangement by Megan Yaner. She does a great job with voicing and interpretation, as well as choice of syllables throughout the song. I also enjoyed The Space Between (which says something coming from someone who is anti-Dave Matthews Band), To Make You Feel My Love, and Water is Wide.

Studio production on this album was very tasteful. Nothing extremely advanced, but it definitely accented the tracks in a positive way.

Graduate in December (a parody of Wyclef Jean's Gone 'Til November) was a nice change of pace for the listener. This is a great track to include on a college album, because the humor in it will still be considered good humor ten years down the road. This isn't a "well-it-was-funny-when-we-recorded-it" song. Kudos for your creativity!

The soloists bothered me a little. Most were adequate, but still not that good. Some, like Sara Abrons on Secret, showed potential, but really disappointed. I heard too many slips and slides on pitches and a lot of people singing as if they weren't very confident. Almost comically, the soloist that I liked the best was Dave Willner, who was the soloist on Graduate in December. I should note that the women singing Water is Wide had some very, very nice moments on lead.

Should you, the paying consumer, buy this album? No. It's just not good enough to warrant a high volume of commercial sales. The upside for the group is that I really don't believe the Tar Heel Voices were hoping for a high-volume of commercial sales. Rather, I believe they were creating a yearbook album, meant for the members of the group, their families, and the current UNC-Chapel Hill student body. With that in mind, this is one of the better yearbook albums that I've reviewed. There is a lot here to be proud of, but as always, a lot of room for improvement.

THV's Two Weeks From Today is an interesting study in contrasts. In just one album, this Carolina co-ed ensemble manages to go from the fantastically creative (Zelda/Mario Medley) to the uncreative and typical (Boyz II Men's Thank You, among others), from the highly-produced (Zelda/Mario Medley, Karma Police) to the rudimentarily-produced (Come Go With Me), and from the well-arranged (To Make You Feel My Love) to the poorly-arranged (a number of culprits). If there's one thing THV is not, it's consistent.

According to my inside sources, this latest release by THV is a significant improvement over previous efforts. The group clearly took a step in the right direction by enlisting the production expertise of engineer Dave Sperandio on many of their tracks. The bass on most tracks is turned way up, as is the VP; the album is overall very well-mixed, which provides for a (mostly) pleasant listen. THV should be proud of the steps they've taken in improving their recorded sound.

Unfortunately, an engineer can only do so much. While THV may have beefed up their production standards, their performances and arrangements don't quite match the high quality of their technology. Though progress has been made, it's sad that this disc doesn't quite fall into the "Good" category rather than settling for "Average". This disc has a production level that approaches The Tufts Amalgamates' Juice, but lacks the outstanding performances that gives that album its real "juice". For starters, the majority of THV's soloists need to work on expressiveness and confidence. The group blocks often lack energy and direction, which is evidence that the MDs need to spend more time teaching dynamics and phrasing, well before they hit "Record". THV also needs to work on groove and feel; the group voices are, at times, out of rhythmic sync with the VP and bass (Secret, Like A Prayer, Thank You, Pinball Wizard).

The vast majority of the arrangments on this disc fail to capture the excellent singing that THV is capable of. THV really shines when given the right material to work with. Check out Steve Moore and Noel Fritsch's extemely simple, but beautiful arrangement of To Make You Feel My Love — it has possibly the best singing on the album. As far as the rest of the songs go, rarely does the listener encounter your basic, everyday, cohesive chord. Instead of homophonic textures, the backs are often heard attempting awkward, conspicuous moving lines. While Off The Beat can pull off a series of interwoven lines in an arrangement, THV's arrangers haven't yet learned when or how to thread together moving parts effectively.

Then again, on the other side of the busy-ness spectrum, there are also moments where the arrangements are lacking richness, and leave a track sounding hollow (Like a Prayer, Space Between). Other tracks fail to build energy and intensity as they go on — they never switch to an open syllable at key moments in order to create climaxes (Dido's Thank You, Total Eclipse of the Heart, Karma Police and One, especially). It's a cardinal musical sin to rob a tune of the peak moments that make the original version so great.

Don't get me wrong — there's some good stuff on Two Weeks from Today, too. The Zelda/Mario Medley is a very unique and interesting track that will amuse anyone who's ever played Nintendo. Andrew Smith's solo on Karma Police is expressive, well-matched to his voice, and was certainly my favorite on the album (though Cami Kotsionis' Total Eclipse of the Heart was a close second). THV does an impressive version of Enya's Only Time, as well.

My advice to THV is: start studying arrangements and arranging techniques by other groups in order to learn and grow. The creativity on this album is certainly above average, so there are clearly some good brains behind this operation (well, except for whoever let the Cartoon Medley make it on the disc — that's just embarassing). While I hope THV continues to take chances with challenging and interesting studio tracks like Zelda/Mario Medley, I'd rather see them put more time into improving the basics of their group sound on the "regular" tunes — especially in the areas of soloist charisma, energy, and dynamics.

The Tar Heel Voices' most recent release, Two Weeks From Today, offers the listener a diverse assortment of modern pop hits, old school doo-wop, classic rock, and even theme songs in this altogether satisfying but not quite fulfilling album. Arrangements and soloists are only occasionally exceptional, and the dampened production quality hinders this CD from reaching its fullest potential.

Non-a cappella aficionados hate when we sing our own made-up arrangements to pop tunes when they come on the radio. I'll admit I do it frequently, and Steve Moore's arrangement combined with the group's execution of Dave Matthews' The Space Between is even better than my one-man attempt at doing ten parts at different points in the song. This track represents the best of the CD: good sound manipulation, nice arranging, balance between soloist and background — although with a little too much soprano action — vocal percussion and bass that punches the beat forward, all combining to sound almost exactly as I had imagined it would. Come to think of it, much of the music on Two Weeks From Today is female-heavy. Pinball Wizard, Boyz II Men's Thank You, and Cartoon Medley could all benefit from some more tenor and baritone. All of the pieces with male solos fall short. There's also a noticeable lack of use of dynamics throughout the album.

The Zelda/Mario Medley is a rather appropriate song for the group. I can remember the day I unwrapped my first Nintendo system. I had saved $100 over seven months to buy it when I was five or six. Super Mario Brothers was by far the coolest thing ever in all its 8-bit glory, but today, it's retro-cool for college. That's the way I'm hearing Two Weeks From Today right now. The music's fun and the overall quality is fine, but the sound and arrangements would have been much more timely five or six years ago. To paraphrase the game, "I'm sorry, but our a cappella princess is in another castle.".