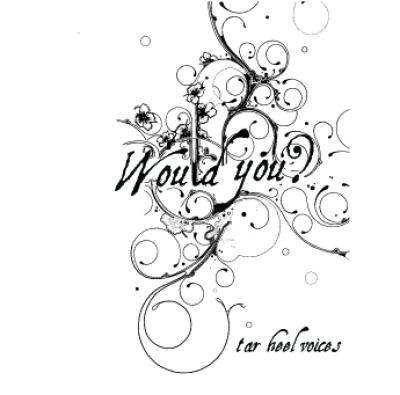 Whenever I get a CD from North Carolina — the school or the state — I'm typically excited. Since it's a hotbed of quality collegiate a cappella musicmaking, the odds are in favor of the album I'm about to review being quite good or even extraordinary. But as anyone in Vegas will tell you, sometimes you can beat the odds. In the case of the UNC Tar Heels, that meant my excitement turned to frustration and disappointment when listening to their latest CD Would You?

Summed up as succinctly as possible, it's "okay", meaning never really great, sometimes pretty good and generally average, run-of-the-mill a cappella. On the plus side, the fundamentals are there: generally good singing from all voice parts, a rich blend in the background block, and a studio polish on the whole thing, including sampled VP and processed bass that gives it all a professional sheen.

Trouble is, what's being polished isn't really all that much to begin with. It felt a little bit like Antiques Road Show, where the eager folks bring their beautiful armoire, sanded and varnished to look beautiful, in the hopes that it will prove to be something so much more valuable than just the place they store the sweaters. For the Tar Heels, it's the arranging technique that is that armoire — old-fashioned, clunky, stagnant. Despite good "varnishing" work from Liquid 5th in the studio, the music is rarely, if ever, transformed into anything more than a boring piece of furniture.

To be fair, the CD starts promisingly with some lesser-performed repertoire choices in Only You and Be the Girl. But already here can be heard the ultimate downfall of most of the rest of the album: overly simplistic "ooh-ahh", block-moving backgrounds relying primarily on bass and fancy sampled VP for energy and movement. In Only You it's the verses that suffer while the chorus picks up a bit of speed, though the anchoring block chords pitched so low under a percussive soprano line works against a cohesive sound. The bridge is the moment where it all clicks: a moment that was far too rare on this CD. Be the Girl is probably the most successful arrangement but the "ooh-ahh" block chord backgrounds of subsequent tracks is already in evidence here in the chorus.

I skip an in-depth analysis of Secret and the deftly-engineered but otherwise uninteresting Every Time We Touch. THV inexplicably then begins a run of seven straight tracks that had me fighting to stay awake. It's not that any of it was bad, but from a hopelessly outdated I Can't Make You Love Me (arranged by an '03 alum that could just as soon have been a '93 alum), to a mind-numbing Frozen that never conjures even the slightest chill, to its polar opposite: Black Velvet, a hot, sexy, sultry song if ever there was one that barely registers a change in my pulse. These are seven tracks, all in middle-of-the-road or ballady tempos, virtually all relying on predominantly unison rhythms in the background voices with little or no development beyond the opening motif. Most depend too much on VP and on the virtuosity and energy of the soloist. All are anchored either in the time-honored "ooh-ahh" tradition or highlight a circa 1998 imitative syllable combination (the relentlessness of the "zhum-zhe-zhigga-zhum" on Daughters was perhaps the most bothersome) that draws far too much attention to itself.

THV definitely has plenty of raw musical talent, but they simply haven't yet developed or found the arrangers who can best put it to use. Finding a balance somewhere squarely between their most technologically produced tracks and their most simplistically arranged tracks should be their goal — and if/when they get there, I'll be very eager to hear it.

Almost as early as the second track, I had an answer to the question that was begged of me. Would you?

I tried balancing my treble and bass. I tried earphones. But even smooth execution on the production end by the now ubiquitous Liquid 5th doesn't perk up repetitive arrangements, buried solos, and lackluster energy, and doesn't excuse boring liner notes that misspell the very first soloist's name wrong and exclude the names of the original artists. Imagine my confusion taking the disc out of its package: the only Only You I know is by the Platters, and I expected Secret to be Madonna's version. (As you may have guessed, dear reader, it's Maroon 5's incarnation.) But that's neither here nor there. The Tar Heel Voices may have paid their royalties, but their notes don't acknowledge original artists or rights-holders, an ever-growing frustration I get from RARB reviewing. Add to this that the music just isn't up to par, and it's just a rather big disappointment.

Arrangements are clean yet average. Stay (Wasting Time) sounds exactly as you would expect it to, with a repeating bass and saccharine "joh-ja-na" marking the guitar riffs. I hear a bit of a legato tone sustained somewhere in the middle, but it's not pronounced enough to make a difference. The vocal distance between the voice parts is so grand that blend is nearly impossible to achieve, which is a shame because I think there are elements — with the exception of some "ber ner ner ners" — of the group's performance, that with more focus and some more complex arrangements could really shine through and create a more cohesive, advanced sound. Frozen attempts a creative twist and Serah Frack does an honorable job on lead vocals, but the wind effect is distracting and overpowers both her lead and the swelling background that could potentially have made the song more intriguing.

Solos are decent but nobody truly shines. Lisa Keaton, for example, doesn't pull off Black Velvet with half as much gusto, belt, and sexy raspiness that Alannah Myles did. Instead, it's sweet and head-voiced, making it seem like she's singing more about gingham. Greg Eppard is a little too shaky on Bless the Broken Road to be convincing. As with Nice Shoes, the Heels' previous release, Elaine Erteschik is the female stand-out. With a soulful, genuine turn on I Can't Make You Love Me, a gorgeous take on All Cried Out, and a nice improv in Stay (Wasting Time), she excels heads above the others. Trey Campbell features on the John Mayer piece Daughters with a lovely interpretation that's not at all airy or whiny. He sings with beautiful color and tone that transforms the song from acoustic guitar pop to evening lullabye, even with a painful repetition in the background that only gets interesting a full two minutes and fifty seconds in.

All in all, it's a basic a cappella album with one or two highlights, at best. The lack of creativity is a major hindrance to the advancement of the group; I feel as though the last three albums have all been on par with one another, and there hasn't been a significant step forward. There's still hope, though, and as long as I live down the road from UNC, there's still room to change my answer. In time, I might. </P

A quiet energy pulses through Would You?, the latest album from the Tar Heel Voices, UNC-Chapel Hill's oldest co-ed a cappella ensemble. Confident production, edgy vocal delivery and a track list of mostly intense, mid-tempo pop/rock tunes all join to create a dark, often-restrained aesthetic that had me alternately mesmerized and uncomfortable waiting for things to speed up a bit. It's a sound that's definitely not for everyone. However, I found it intriguing, and upon repeat listens, ultimately pretty enjoyable.

I'll start with the best stuff. A couple tracks on this album really grabbed me. Frozen with its slow-build arrangement, soaring choruses, and intense whispered solo kind of gave me goose bumps. It's a more brooding take on the Madonna original and I really enjoyed the vibe. Ditto for Secret, which evokes an atmosphere of mystery and darkness right from the first notes and sustains it through to the end.

I felt the album falter with a good handful of the soloists. Some were good singers who, I felt, didn't fit the style (Daughters). Some were produced into oblivion (Every Time We Touch, though I did appreciate some of the same production of the backgrounds and harmonies. Some simply lacked the vocal power and control to carry their songs (Still Fighting It). Also, melismas and vocal pyrotechnics are all over this album, yet they don't always feel appropriate. It's cool that these singers are capable of such acrobatics, but I heard too much of what sounded like riffing for the sake of riffing.

Even though it's not exclusively in the style, I'm going to recommend this album to fans of the collegiate emo/edgy rock sound. There was something persistent in the Tar Heel's approach that reminded me a lot of perhaps a more subdued version of the Cornell Chordials or Off the Beat. If those groups strike a chord with you but you're more about chilling out to mid tempo fare, I'll bet that Would You? will be right up your alley.