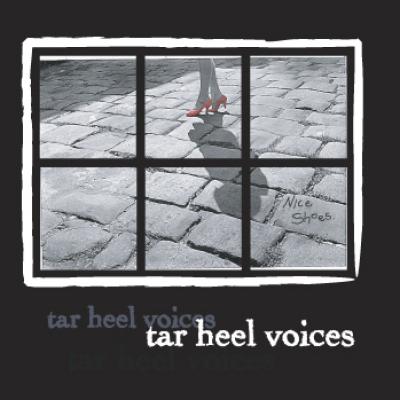 Tar Heel Voices (THV) have clearly taken steps in a new direction yet again. The group's latest album is more ambitious sonically than its previous release and thoroughly more consistent. And yet for all the strides made by Nice Shoes, one gets the impression that, in many ways, the group is standing right where it was last time around. That is, they have trod their way to another acceptable, but mostly forgettable album.

The glimpses of greatness this time around are more palpable, which is perhaps why they are more frustrating to experience. With the prior release, the overall production had outmatched the quality of the performances. This time, two tracks in particular — Ain't No Sunshine and Sleeping To Dream — feature flawless, passionate performances by both the backing voices and soloists, and yet the tracks fall short. Both tunes are crippled by percussion buried tragically low in the mix. The poor mix single-handedly brought both tunes down from a score of 5 to a 4. What a shame.

While lack of audible vocal percussion makes its non-presence felt throughout the album, it is hardly the only culprit. There is certainly no dearth of trouble on the performance front. Rhythmic instability hampers Bring Me To Life. Most solos are good, but a few use excess vibrato. Awkward chord voicings and unsavory, uncool syllable choices crop up here and there.

On the positive side, the energy from track to track is good overall. THV seems incapable of holding back enthusiasm from their performances. Dynamics were prevalent — the group seems to know how make music. The group spans a wide range of styles and pulls them off with aplomb. Ain't No Sunshine is as convincing as Teenage Dirtbag.

The aforementioned shortcomings do not allow this reviewer to throw Nice Shoes into the recommended category. However, the raw material for a future excellence — stellar performances — is visible.

Not that I needed any further convincing, but the Tar Heel Voices make me more hopeful about moving to North Carolina from central Ohio, a veritable barren wilderness of collegiate a cappella. This is not to say that Nice Shoes is anywhere near the top of the game, but it certainly offers a few high points that make me anticipate going to a few campus shows in Chapel Hill in the fall.

While the arrangements are often spartan (Ain't No Sunshine) and short (Something To Talk About), they have just the right amount of kick and punch to keep energy up. Nevertheless, that and the few standout soloists are all that's keeping Nice Shoes afloat: Emily Cook opens the album well on Heads Carolina, Tails California but fails to match previous incarnations of soloists on Uninvited. Justin Carter offers some soulful turns on both Ain't No Sunshine and If I Ever Fall, and the last track features perhaps the best Tar Heel Voice, Elaine Erteschik. (Without the final, painful, and strangely unsettling three minute banter at the end of Always Be My Baby, it would have received at the least, a "4".)

Too much of the album, however, seems pieced together, a bunch of various vocal elements strung together that are usually not native to the original song. Sometimes there's something to be said for originality, but the beatboxing in Something To Talk About just doesn't work. Combine that with an overcompensating soloist who performs well but really seems to want to rock out when the background vocals don't lend themselves to a wailing lead singer. I'm also concerned with the inconsistent production; Teenage Dirtbag doesn't impress nearly as much as I would have expected (shouldn't "werr nerr nerr" and "bow now wa-now" have left the a cappella arranger's vocabulary by now or at least be distorted to the point of unintelligibility?), but Uninvited offers the right balance of blend and distortion, even if the tempo is disturbingly too slow. All The Things She Said makes my ears dizzy; it sounds like Nick Lyons had too much fun with the knobs and buttons he can play with. I'm not sure what American Tune is doing at the end of the album, but it's a strange, awkward detour from the pop fare elsewhere on Nice Shoes.

I would have liked arrangements that pay more attention to the middle voices and don't move in blocks; I think what slows the tracks down are the chords that change all together. Try some syncopation, and don't rely solely on the vocal percussion to kick the beat forward. Nice Shoes is definitely more focused than Two Weeks From Today, but lacks the diversity of sound and is too restrained to make it a repeat listen.

"Nice" is a word people often use to describe someone or something that they can tolerate but don't quite want to compliment. Think about how many times you've had a crush on someone, and they said that you were "nice" or "sweet." So the UNC Tar Heel Voices did us a favor by using that word in the title of their latest release, Nice Shoes, preparing us for an average album that is neither bad nor good and falls somewhere around the middle of the pack.

Looking back at the reviews of THV's previous album, Two Weeks from Today, it seems as though the group has not changed its ways much. The energy has improved in the studio, but the arrangements continue to be bland and mediocre, and the group continues to be inconsistent.

There is nothing innovative or creative about the arrangements. In fact, the best ones are those done by the group's alumni (Heads Carolina, Tails California, Sleeping To Dream, Something To Talk About). Several of the songs are arranged by more than one person, and oddly enough, those are the most simple, bland and boring. It took three members of THV to put together Wonderful Tonight, a very simple Eric Clapton ditty, yet the arrangement is too remedial. The same can be said for If I Ever Fall, a song that I can't believe is still being performed, let alone recorded. This song was overdone back in late '90s.

Song choice is another problem of Nice Shoes. For a group that's been around as long as THV (founded in 1988), the group recorded too many songs that have been overdone (e.g. Bring Me To Life, Ain't No Sunshine, Wonderful Tonight, Uninvited, If I Ever Fall, and Always Be My Baby). The inclusion of Jo Dee Messina's hit Heads Carolina, Tails California and Jason Mraz's Sleeping To Dream are nice additions. THV would do well to search out more songs that haven't been performed by one group or the other on every college campus.

The best part of Nice Shoes is Ain't No Sunshine and If I Ever Fall soloist Justin Carter. He puts together two very soulful and beautiful lead vocals, making the album worth a listen just to hear him sing. He has great control of his voice, able to master his runs and trills with the best of them.

THV turns out a solid, yet unspectacular album in Nice Shoes. There are a couple good tracks, but one listen through is enough; there isn't enough to warrant a repeat listen. The best way to describe it is: nice.

To order Nice Shoes or any of THV's other albums, please visit the group's website.