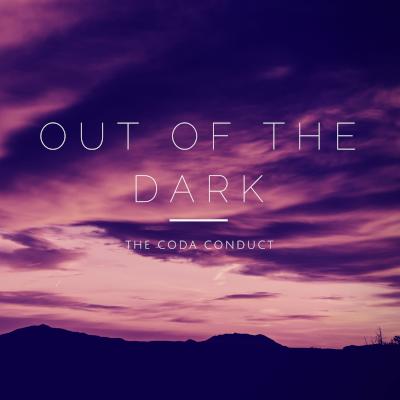 I've never before been so conflicted on scoring an album. Out of the Dark gives me all of my favorite a cappella elements, earning it some points. The EP features human-sounding percussion, which I love, despite lacking credit. Ricky Jabarin's arrangements are innovative, utilizing uncommon syllables, crunching chord structures, and beautiful deconstructions to bring new life to oft-covered songs. But the dynamics are appallingly lacking. All four songs are inappropriately blasting, with only the occasional lift in Yesterday and What Do You Mean? granting your ears a break. The command of microdynamics this group has is clear, but it's only utilized at climatic moments — going from loud to louder for emphasis. This makes the journey clearly coded into the arrangements fall astoundingly flat, costing Coda Conduct what should be spine-tingling excellence. The chief example that sours me: a beautiful glissando written in at the pre-climax of What Do You Mean? (at "had me from the start"), where the dramatic effect is completely stolen by people just singing too damn hard the whole time.

In the group's defense, this EP showcases how much these guys and girls love to sing, especially the basses. The intention that the soloists have is excellent, for the most part. Unfortunately, that same problem comes right back into play, making the soloist difficult to separate from the background at times. While I am not clear on the cause, I'll attribute that to a mixing choice rather than the performers going blastissimo.

Here's what I would say are takeaways to consider for the full album: honor your arranger's intent as much as you honor his notes and chords, and explore the ultimate levels of quiet you can reach to help tell that story. There is nothing more awe-inspiring than a strong piano dynamic that leads to swelling chordburst, even if that burst doesn't hit fortissimo.

Which now brings me to scoring — how could I give superior music writing and strong soloists a "3" in good conscience? On the other hand, how could I reward plateau-flat shaping by calling this upper echelon?

In the end, I believe that the combination of good and bad in this is what makes it worth the "Good" rating: Out of the Dark is clearly above the "Average" bar, but showcases both what to strive for and what to avoid to the community at large.

The Coda Conduct's first studio EP is like a bite-sized sample of what this talented group can do. The real secret weapon is the magic brought by Vocal Mastering's David Sperandio. This EP is loaded with studio tricks and reverbs that result in a good product.

With slayer solos and arrangements that are intricately-designed for the group, this EP is a perfect day-starter any morning of the week. Breath of Life touches a wide range of music eras in one track. It has fugue, classical choral, round singing, and more, which is a smart way to induce eargasmic pleasures in a track. I haven't heard the original Yesterday track by David Guetta but I would say this arrangement could cause one to uncontrollably lip synch the song in the subway looking like a crazy. What Do You Mean? in choral style might be a bit too much, though it is an unexpected way to interpret a Justin Bieber song. The arrangement style is easy to dissect into 4-5 vocal parts, but I give it a brownie point for song innovation. Wrapping it up with the Sia hit Elastic Heart, the EP doesn't run out of energy with such strong vocal talents working together in producing this craft.

As a whole, the EP is well-produced, the solos are great, and the creativity of the arrangements are to be lauded. Some spots where arpeggios are not emphasized more (Yesterday) and the out of sync heartbeat sound at the end of Elastic Heart are a few specific areas that need refinement. Overall, my ears are happy and I'm hoping to have more from The Coda Conduct.

In recent years, releasing an EP has become increasingly popular. The shorter format suits the smaller monetary and temporary budget of collegiate groups better than a full length album while still allowing for more experimentation and artistic expression than a single. Sadly, much of this potential goes untapped on Out of the Dark.

The opening track, a cover of Florence and the Machine's Breath of Life, certainly has a big sound, with booming drums and distorted voices imitating electric guitars. However, the song doesn't really head in any direction — the arrangement starts big, stays big, and ends big, with not much dynamic range overall. Apart from a brief choral interlude, not a lot of new ideas are introduced; however, it's energetic enough that you won't get bored, and it fulfills its task as a grand opener.

The group's version of David Guetta's Yesterday starts off with a tentative intro, featuring a slightly sloppy ascending arpeggio which seems a bit out of place, but it soon launches into a very danceable chorus. Unfortunately, the rest of the song doesn't make good on what the chorus promises. The arrangement is quite repetitive and doesn't hold my attention, though you might argue that too much variation could be a bad thing in a dance track like this one.

What Do You Mean?, originally by Justin Bieber, is a noticeable gear shift. The choice of a single soloist is foregone in favor of a choral arrangement, with different sections trading the melody lines between each other. Rhythmic fluctuations recur throughout the track, and it's not always clear whether they're intentional, especially as they occasionally interrupt the flow of the song. The song builds nicely towards its climax though, showcasing the group's voices better than any of the other tracks.

Closing the EP out is a cover of Sia's Elastic Heart, which again stays fairly close to the original but is nonetheless the most engaging and cohesive track on the album. I'm not sure why there is a heartbeat fading out throughout the last few times and why it's completely out of time; it's slightly irritating once you've noticed it.

Overall, Out of the Dark strikes me as an EP with not much to distinguish itself, either positively or negatively. The song choices are solid but safe. The production is passable and the album sounds cohesive, but there's an annoying tinniness to the solos and generally a bit too much emphasis on the mid highs, which negatively impacts the listening experience quite a bit. There are a few nice arrangement ideas, but they are few and far between — I like to remember particular moments from a song, and this EP has me coming up empty. In the end, The Coda Conduct have made a fine effort, but I implore the group to be a bit more daring next time lest the next release becomes similarly forgettable.

Out of the Dark also streams on Spotify.