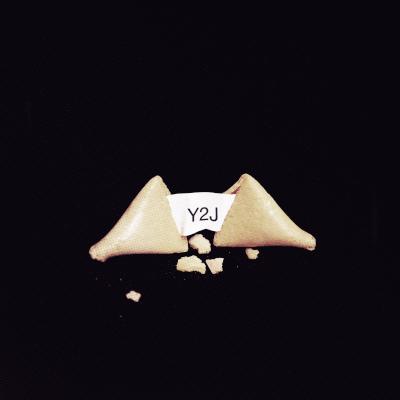 Y2J is one of the most entertaining releases of the past few years, anchored by fun source material, high-powered vocals and flashy production. It's a thrill for the ears, and you'll want to hear all of these tracks laid down by the YellowJackets.

Singing Coldplay's Adventure of a Lifetime with that catchy techno hook must be a beast live, but as a recording it comes to life as an electrifying a cappella cover, just the kind you want kicking off an album like Y2J. We slide right from this satisfying opener into Bang Bang, which is an absolute a cappella tour-de-force. RARB reviewed the single for Bang Bang as a "4" earlier, but for my tastes, this is a "5+". This track is so much more than pop candy — it's gorgeously musical, with a crazy-nuts bass wrapping it in a sound that's at once old-school Rockapella and somehow fabulously modern. The bass work on all of Y2J is so prevalent, popped, and spotlighted that the bass line actually gets credited on each track to the YellowJacket singing the part. How about that? Mark that down as my first time seeing this notation, but as the unity of bass and percussion becomes tighter in modern a cappella, it's certainly not surprising. For Bang Bang, the slick slip-sliding bass work belongs to Kyle Hogan. We round out the power-trio opening segment with Pompeii, featuring a sexy lead from Matt Carlin and a locked and loaded iconic chorus that just blasts cannonballs of awesome. Off to a flawless start! The music shifts dramatically after this trio for Fred Astaire's The Way You Look Tonight. I'm sure this slicked-hair tuxedo piece is very popular for gigs, and also shines here with its silky smoothness. Very capable lead Keith Klein transports us back to an easier, more relaxed era with skill and grace, and somehow, this nugget doesn't feel out of place nestled among the pop hits.

After these four, some of the music falls a bit, but it is no less beautifully sung. Sorry just isn't that compelling of a song in its original form, and the tinny snare here doesn't help fill out the otherwise voluptuous soundscape of Y2J  — but darn it all, these guys still give it 110% with their enviable performance abilities. Runaway Baby is shouty-fast hard rock that gets a touch repetitive, but again, the wailing! I adore White Winter Hymnal, a piece that's magical in its dissonance and totally captivating with its breathy-folk presentation. Stitches is offered here as a slower stomp-clap piece that complements the original groove well, and we get another red hot bass feature with Trap Queen. Every Other Freckle is among the dirtier songs recoded in the collegiate scene (not for the easily offended), and Everything Will Change is a (perhaps predictably) big razzle-dazzle closer befitting of the many fireworks on display in Y2J. In the back-half of the album, you may gravitate to artistic Say Something the most, a very creatively intertwined arrangement of Say Something and Such Great Heights, an impactful and dramatically delivered piece that makes you want to replay it again as soon as it's finished. This is good, good stuff.

So there you have it: a heckuva album from the YellowJackets, full of engaging and memorable material with mixing credits going to David Longo, Nick Lyons, Danny Olefsky, and Angela Ugolini. Y2J is a team effort of a release, and one you can't go wrong owning.

As the 18th studio album from the University of Rochester YellowJackets, Y2J is an impressive feat in and of itself and deserves applause. Y2J is for the most part targeted at a younger musical audience, and much of the appeal lies there.

Its relevancy can be heard through much of the production work. The constant themes are present and prominent basses, great attention to detail in hard-hitting and fast-paced percussion, and often processed vocals on the higher voices.

Four songs in particular deserve high praises. Sorry by Justin Beiber is one. From the laid-back reggae vibe at the start, to the emergence of a great R&B soloist in Logan Stillings, there is a ton of ear candy. The control of the backing group is great; they know when to push dynamics in build-ups to the chorus and maintain lightness during verses.

The second song is The Way You Look Tonight, one of the few non-pop-heavy inclusions. The YellowJackets don't try to recreate a great jazz classic for the modern era, they simply perform a great tune. The warm baritone lead mixed with the careful balance of the group executes an old vintage style of music that is simply wonderful.

The third song is Every Other Freckle by Alt-J, which I feel has more appeal than the original. It's still processed, with an indie rock feel to it, but the group's version does away with the dramatics, replacing them instead with a steadier flow of sound and entertaining inclusions like the colorful, vocal instrumental section.

The last is Say Something, a mashup of A Great Big World's hit with Such Great Heights. In almost any respect, another cover of Say Something should draw disinterest, but the two songs work seamlessly together. The tone and energy of the two songs mesh perfectly in the YellowJackets' arrangement, increasing the overall feel and emotion, ultimately resulting in an alluring piece.

White Winter Hymnal is less folky than the original, and the artistry comes across effortlessly through repeating backing patterns that aid in the song's progression. Trap Queen is fascinating in that it is one of the only a cappella rap songs that successfully doubles its backing group as both hype man and background music.

The YellowJackets do have their faults, and one is Bang Bang. The song's time has passed. Here it often comes across as being loud rather than energetic and has a lot of moments of hissing, which could be coming from the cymbal effects. Other issues such as balance in Adventure of a Lifetime, where I could have used more mid voices, and an overabundance of layers in the bridge of Runaway Baby are brief moments of dissatisfaction in an otherwise great album.

With loads of energy, appeal for younger music lovers and those looking to get a good taste of Top 40 hits, Y2J is a great example of how good collegiate a cappella music has no indication of losing steam, even after 18 albums.

I'm pleased to say that after The Sing Off and the success of their previous album, United We Sing, the YellowJackets from the University of Rochester have not let their standard of excellence slip. Y2J is proof of this, featuring carefully crafted arrangements, committed solos, and top-notch production. The only real flaw is the track order: the first half is incredibly engaging while the latter half ... well ... isn't.

Adventure of a Lifetime is a fantastic opener, just full of energy. However, Everything Will Change, while well done, fails as a closer. It would have perfectly followed Sorry. Runaway Baby, Pompeii, or even Say Something would have made a much stronger closer. Spreading out the exceptional tracks instead of front-loading them would have made the slightly more generic tracks feel like intentional breathers rather than afterthoughts.

The strange outlier is White Winter Hymnal. It's a strong arrangement, and it doesn't mention Christmas at all, but it feels like it belongs in a different album. The Way You Look Tonight treads this line as well, but I suspect it's simply due to its location in the album.

Y2J isn't quite on par with United We Sing, but it is still a wonderful album well worth adding to any a cappella collection.