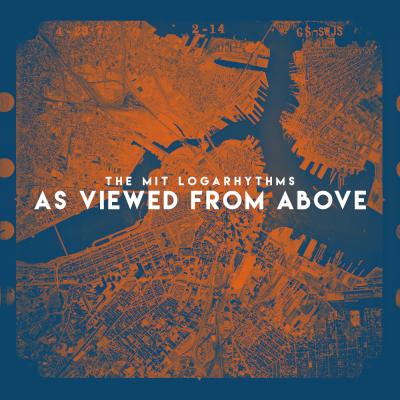 To fault the MIT Logarhythms for their penchant for heavily-produced a cappella is not only unfair, but it also ignores the group's history and the sound they have been reasonably faithful to over the last decade and a half or so. I've written previously of the group's struggle to find the humanity in what can sometimes be an overly "mechanized" sound, but that's not really an issue — or at least not the primary issue — on their latest 8-song recording, As Viewed From Above.

To their immense credit, it's the rare collegiate a cappella release that allows me to celebrate its legitimate creativity. All the songs offered here are covers, but even in what might otherwise be a primarily transcriptive arrangement — Superstition almost unavoidably comes to mind — there are nuances (interior passing lines, additional layered rhythms, et al.) that demonstrate that the group's arrangers are meaningfully thinking about interpreting the music for voices and not just merely translating it into something singable. The very spare drums/bass/acoustic guitar of the original U Got It Bad is expanded into more of a boy-band sound, with fuller, richer chordal backgrounds. Relatively simple, yes, and you may not care for the interpretive choice (in the case of the power ballad that Jason Mraz's I Won't Give Up becomes, I certainly did not; nor did I care for the truncating of Satisfaction), but there is an interpretive choice and that's rarer than I wish it was, especially at the collegiate level.

But back to that primary issue noted above: it's not so much the produced sound that tends to kick in, even as the intros often feel breathy and almost live. It's not the almost superhuman (tracked) drum lines that show up in songs like Expensive and White Lines. No, where the Logs fall short on this album is in not necessarily knowing when to get out of their own way. When too much is in fact too much. The mix of repertoire here is pretty evenly balanced between uptempo and more moderate or ballad-y tracks, but the uptempos are superior (and thus merit the "5"s shown above). These guys definitely know how to do fun, funky, groove-based, driving pop/rock, and Expensive is one of the best openers on any album I've heard in quite some time. With the sparser, slower music however — the aforementioned I Won't Give Up and the first 2/3 of In Your Atmosphere in particular — there's just too much going on such that the feel and character and raw emotion of the song is diminished. Some slower songs can be filled out with lusher backgrounds, but not every song should. And while we're on the topic — dynamics, boys, dynamics. Embrace them. Especially in the slower material. Just because you want to get to mezzo forte or more for the chorus doesn't mean you have to stay there faithfully for the rest of the song.

These sorts of artistic concerns, though, are really #firstworldproblems as far as a cappella goes. In many ways, there is an embarrassment of riches here: a group of clearly passionate, talented singers; arrangers with an affinity for interesting repertoire and purposeful, stylish arranging choices; and crackerjack recording, production, and editing. If my quibbles are problems, they are nice problems to have. And don't let them stop you from picking up this album. This is indeed most excellent work and I'm just being my usual demanding self.

I don't often receive albums to review that are just solid "4"s across the board, but the Logarhythms have just about done so with their latest release As Viewed From Above. It's a really solid album though there isn't anything that's remarkably memorable (or anything that is super cringe-worthy, either). Across all channels and criteria they hit really high quality marks with sound, singing, and arrangements, but that je ne sais quoi is missing to make this a really excellent album.

The album is full of fun music. Expensive is a great opener — energetic and groove-filled — with just a touch of pop-soul in soloist Ray Asare's delivery. He's got a slinky swag that serves well on Tori Kelly's lyrical phrasing. Satisfaction is the best song on the album. All ballsy blues rock.

I think my major issue with the album is the brightness of everything. All of the uptempo songs sound like they are about to crackle right out of my speakers. Expensive, White Lines, Satisfaction, Everybody Talks, and Superstition are especially buzzy with an almost metallic quality. Which is funny, because my initial criticism of the album upon my first few listens was that it was too natural-sounding. So these "replicable-live" tracks are glossed within an inch of their lives — the worst of both worlds. It's jarring because the ballads don't have that same production, so hearing these bee stingers in your ears then the brief respite from the smoother songs happens too frequently on a short album such as this.

Okay, I'll just be honest. What I really dislike about the album is the fact there's no track on the same level as The Blower's Daughter [from 2008's Give Us Back Our Spyplane!] on this release. The Logs' recorded the most sublimely awesome version of that song that I've ever heard, still making me feel as emotionally raw as it did eight years ago. I want that again, and I hope that the members of the group want to achieve that level of artistry again. In Your Atmosphere comes the closet that I've heard in a long time. So I know the group still has it in them. In fact, if arranger Ryan Chipman can collaborate on a future chart with alumnus Michael Miller (who penned Daughter and offered U Got It Bad here), I believe they could create something absolutely transcendent.

As stated previously, there's nothing really wrong with As Viewed From Above; it's a solid piece of work that an audience will enjoy for casual listens.

First, I need to get something out of the way. I have been involved in contemporary a cappella about ten years now, and I owe a big part of that to the MIT Logarhythms (or the Logs, as they are affectionately known). After my high school choral teacher convinced me to join the newly formed all-male group at my high school (thanks, Ana Morel!), one of the very first concerts that I went to/performed in was my high school's A Cappella night, in which the Logs were one of the guest performers. I was instantly hooked. So, to the Logs, I thank you.

Now, with that out of the way, As Viewed From Above. From start to finish, there is a lot to like from the solos to the production of each of the tracks, with big shout-outs going to Bill Hare and Alex Green at Plaid Productions. One of my favorite tracks on the album, John Mayer's In Your Atmosphere checks off all the boxes in my book. Gus Downs delivers a tender and heartfelt solo that tugs on the heartstrings. Ryan Chipman's arrangement is also very smart — by not adding any vocal percussion to the track and keeping the background vocals relatively simple with a series of sustained "ah"s and "oh"s, Chipman allows Downs to be the vocal point of the track and he absolutely delivers. The ending of the arrangement may just be my favorite moment on the whole album, as Downs and the backgrounds grow to this beautiful crescendo before slowly fading away to nothing to finish it off. Every time I hear it, I get goosebumps.

However, the Logs are not just able to sing the touching ballads. They show that they can have fun with upbeat pop songs, such as Tori Kelly's Expensive and SIX60's White Lines, starting with dynamic solos from Ray Asare and Shaun Datta respectively. The energy from both of the solos is infectious to the backgrounds and the percussion — it's almost impossible to not dance to these tracks. Anthony Thomas also shows off his creative chops on Stevie Wonder's Superstition, with a slow open on the repeated phrase "Ooh Superstitious, very superstitious", before jumping right into the first verse. Foregoing the iconic introduction is definitely a risk, and Thomas stepped up to the plate and showed that it was a risk worth taking — well done.

Now, despite all the praises that I have given the record up to this point, the construction of the album does give me pause. After the first two tracks, the album follows a pattern of slow ballad, uptempo rock song, slow ballad, etc. That pattern, while trying to balance the album out, makes the album a little too predictable for my liking. I also do wish that there were a few more unique moments across the album like the beginning of Superstition, especially on Jason Mraz's I Won't Give Up. As that song has been covered by a number of a cappella groups over the years, I was looking for something to set it apart from not only the other covers that I've heard, but to also separate it from Mraz's original. While the Logs deliver a rendition that was beautiful and heartfelt, it just didn't provide that "wow factor" like some of the other tracks on this album or other covers of Mraz's tune.

Despite this criticism, I very much enjoy As Viewed From Above — the entire album is beautifully sung from top to bottom and provides some great arrangements, reminding me why I fell in love with a cappella in the first place in that auditorium almost ten years ago. A job well done, Logs.