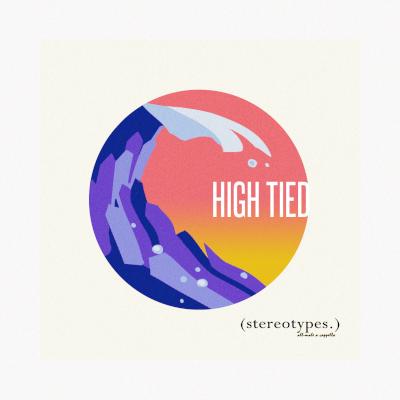 This stuff is addicting. I was barely over the 2014 release All Tied Up when High Tied showed up in my mailbox. I have no doubt this will keep me tied over for two or three years until the Stereotypes put out their next knockout collection of catchy, vibrant, all-you-could-ask-for recordings.

The body of this album is one long string of awesome. Tracks three through seven are all airtight, and the fact that they all convey completely different vibes makes the journey that much more enjoyable. I want to draw particular attention to Burnout and Tempest. Burnout is a hard hitting half-rap that would be right at home on an Ed Sheeran album. Except it's not Ed Sheeran, it's an ingenious original composition by Stereotype Rohan Shirali. On the other side of the musical spectrum, Tempest is an electronic groove that breaks away from the usual pop phrasings to plunge instead into a spine-tingling trance crescendo. This does not mean you should skip Sonsick, House of the Rising Sun, or the M.G. Medley (M.G. For Marvin Gaye). It just means you'll have to discover their greatness yourself.

Tracks two and seven are just shy of the airtight mark. Work Song is a powerful Hozier sequel to the golden age of Take Me to Church, but this arrangement is just a little too crowded. With less chord padding there would be more space to emphasize the soloist and the backing lyrics. If Work Song is too square, then Latch is too amorphous. You will appreciate the creativity Leo Chang pours into this arrangement, and you might find it flawless, but for me it feels like the parts never lock into the same intention.

Finally, the bookends are only fine. Any Way You Want It and Start All Over are technically sound, but both are straightforward "setlist fillers" that lack the dynamic intrigue of the rest of the album. In the big scheme of things, it's tough to complain when the lowest score on a nine-track album is a comfortable three out of five.

Are you hooked yet? If not, I would just add that the individual singers are phenomenal. The soloists, especially high-flying Ronny Bass, are all made for the stage. What helps make the Stereotypes so strong is that when the singers are not taking the lead, they are putting just as much energy and precision into their background parts. Combine that with eclectic, yet relatable, song choices and focused arranging and you get an album that hardly ever goes back on the shelf. Forget the irresistable zing of coffee, the allure of freshly baked cookies, the notifications on your smartphone. Once you try the Stereotypes, just there's no going back.

High Tied starts with that characteristic in-your-face sound that I've come to expect from The Washington University Stereotypes. Any Way You Want It is short, sweet, and to the point, deviating from the solo+background+bass texture only when appropriate. The track that follows, Work Song, features a soulful performance by Ben Talisman. With the exception of a misplaced Take Me To Church quote, the interpretation is thoughtful and the use of body percussion is a great addition. With Sonsick, Lieberman saves an otherwise stale track from losing the listener's attention.

Lawrance Lee's performance on House of the Rising Sun is something to be reckoned with. More dynamic contrast would've been helpful with this track but the emotional intensity is undeniably palpable. As with Sonsick, the M.G. Medley is rescued by Lieberman. The transitions alone will throw you for a loop. Tempest is the most important track on High Tied for several reasons: a song choice that is both outside the mainstream and begs to be rendered a cappella is something to be desired, and the Stereotypes did not squander this opportunity. Tempest utilizes fewer layers than the preceding tracks, choosing instead to highlight abstract and organic melodic elements. The track demands your attention and does not let go.

Burnout features the songwriting and arranging abilities of Rohan Shirali. Combining Shirali's talents with those of Lieberman and the soloist, Jonah Lillioja, this track is a welcome juxtaposition from the previous track. The style changes with Latch will leave your ears constantly guessing as to what's coming next. High Tied concludes, in stereotypical Stereotype-fashion, with an intense and roaring cover of Start All Over. I think I will...

The high points are worth mentioning. Tempest is a solid track, well performed despite being a direct transcription of the original. Latch is serene, with a light underscoring paired with Ronny Bass's cutting falsetto. Jonah Lillioja on Sonsick is beautiful. Lillioja also has a great turn on the original track, Burnout, penned by member Rohan Shirali. The arrangment for Burnout is a little too safe and simple to make it a standard bearer for original tracks, but the accomplishment is worth nothing — nice song, gents. Start All Over is a great closer, calling back to the opening track (Separate Ways) of this group's last product, All Tied Up.

Speaking of the last album opener, the Stereotypes opened with another Journey song ... continuity is a crowd pleaser, to be sure. But where Seperate Ways was punchy, and set the tone for the product, Any Way You Want It just doesn't do much for the the album as a whole. Work Song drags as well, lacking the true rhythmic push and pull of a soul track. Rising Sun and the Marvin Gaye Medley also lack flair — they aren't bad, but they just don't rise above the pack.

I do enjoy the variety of artists I'm seeing, though — All Tied Up featured less covered artists, like Kodaline and Daughter, and High Tied surprises with SOHN, San Fermin, and Harper Blynn. It's not enough to be the only group covering a particular artist, though — to be next level, the creations themselves have to be uniquely "you".