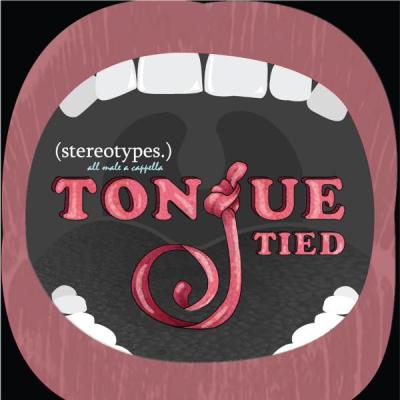 So I'm a little weirded out by the literal tied tongues on the album art, but the music on Tongue Tied certainly isn't weird. If anything, the music is quite accessible (and often well-covered), but at least the guys from Stereotypes bring charm and energy to their microphones. And with a group this size (over twenty voices listed), there's a lot of charm and energy to bring.

The Stereotypes have a flair for over-the-top pieces, often favoring campy or clap-along-style numbers. Pieces soundly in this style include Holding Out for a Hero, Like a Prayer, and Boy Band Mashup, and to a less campy but still over-the-top degree, Somewhere Only We Know, Set Fire to the Rain, Defying Gravity, and Jai Ho. The arrangers also love going for the big closer-type ending: slow down the tempo dramatically for the last few measures, throw in big uplifting power chords, hang on to that last note and wait for the "Amen, brotha!" If you love this style, then Like a Prayer, Jai Ho, and Defying Gravity will really float your boat. Because of all this, I hear the Stereotypes as more Show Choir than Vocal Band. There's certainly nothing wrong with a track list like this and a high entertainment value arranging style, but it's pretty much all you get on Tongue Tied. If you're into more nuanced music, real thinker pieces, then Tongue Tied isn't for you. The overall danger here is embracing corniness over creativity, and Set Fire to the Rain sounds about as corny as one can get.

Additionally, the soloists on Tongue Tied really favor a musical theater style delivery, which I imagine will delight some and irritate others, but it goes hand in hand with Tongue Tied's track list. A few soloists move in other directions, most notably Danny Lamere on Something to Believe In who goes for edgy rock, and the unnamed soloist on Alabanza, whose pure and gentle sound is quite refreshing in this mix.

Tongue Tied is loud and often exciting, but I'd certainly like to see more contrast for the Stereotype's next release.

"GUYS! IT'S THE STEREOTYPES!" Or, at least, that's what it sounds like the guys' latest, Tongue Tied, is saying. This is a loud album, and I don't just mean that the songs on it have been compressed and squashed up against a limiter, though they have been pushed a little too hard in mastering for my taste. These guys are YELLING. Often, it works, like on the album opener, Holding Out for a Hero. This song is all about volume, and the Stereotypes deliver. I could have used a little more punch from the rhythm section, but for the most part, the volume is carried by the screaming tenors.

The Stereotypes definitely have a strong tenor section, which is strangely rare in all-male a cappella. Too many times I've found myself listening to a record and thinking, "Do these guys not like belting or something?" This is not a problem here. Granted, it gets a little old once you hit the third or fourth song that opens with belting, but I'll definitely give the group points for commitment. Energy rarely if ever falters, to the point that you imagine that after a live show, these guys' throats must be ragged. The problem with this aesthetic is that it makes creating "moments" harder to do. Hero gets the job done, but for the next five songs, the volume doesn't really let up. The following tracks are all loud, and while they have climaxes, they don't seem quite as ... climactic as they could. It seems as if high points are merely dropped in, or are strung together like an aural connect-the-dots. For a significant portion of the album, the music doesn't vary all that much in volume or textural density either within or between songs.

When the aural assault lets up, however, we get something great. Stop This Train seems both out of place and perfectly positioned in the middle of the album, where the relatively dry and pointy spaces of all the preceding tracks give way to a lush, warm, reverberant soundscape. The textural changes and shifts in density that are missing from almost all the other tracks on the album come into wonderful focus on this song, building from sparse emptiness to round fullness in an arc that assists the song's flow and meaning, supporting soloist Tripp Wickersham as he rides the inescapable momentum of the music. It's pretty excellent text-painting, and a standout on the album.

Immediately following Stop This Train — and also good — is the bouncing party song Jai Ho. Arranged and soloed by Dithu Rajamaran, the song's textures and vocal styles all just work, with the occasional exception of the groove in the percussion. The solo is pretty great too, though some over/mis-tuning seems to have taken place, flattening some of the more expressive moments in the adapted raga that Rajamaran is riffing on. It's interrupted by a rather superfluous choral/barbershop bridge, which is the only thing really bringing the song down from being another topnotch track.

Tongue Tied's few but overarching unfavorable aesthetic choices include the myriad barbershop breakdowns and outros sprinkled throughout the album. Multi-song arranger Chip Broze has a knack for writing tags, but ending If You're Out There on a big prolonged harmonic suspension doesn't really seem all that appropriate to me. Also not favorable is the bass section's choice of tone, which seems to have been "sing the bass line as loud as possible." It's loud, but really bright and not particularly warm or resonant, and so tends to cover the solo up a lot since it's been placed in the center of the mix on all twelve tracks.

Man, even after writing this, I can't get over how into it the Stereotypes are on this record. Their energy and commitment shines through, which is what really makes this album fun to listen to. Often, their energy is obscured or sapped by some not-so-favorable choices in arranging or production, but it's still there, and still palpable. The guys should make sure they keep this up the next time around.

The Stereotypes, an all-male a cappella group from Washington University, are certainly a fun-loving bunch. Every song bursts with the vitality and the "why not?" spirit that permeates amateur a cappella, the idea that hanging out with your friends in high school or college and covering fun songs is what a cappella is all about. I've been there, and it's an absolute blast. Tongue Tied is about singing in hotel elevators, staying up till four in the morning shouting out TV theme songs, or impromptu performances on busy city street corners.

Unfortunately, my job description doesn't allow me to review "hanging out with friends" (attempts to start a blog on the topic have been furtive at best), I'm here to judge Tongue Tied for its musicality in direct comparison to the contemporary a cappella greats. As a cappella music stumbles out, bleary-eyed, into the harsh world of mainstream music, it becomes harder and harder to see the lighter and sillier contributions of the collegiate world as anything but throwbacks to an a cappella world long gone. I'm happy to report that, although it's far from perfect, Tongue Tied achieves a pretty nice balance of musicality and joie de vivre; the end result is an entertaining listen.

Song selection was the first thing that stood out to me about this album — when an all-male group covers Bonnie Tyler, Adele, Madonna and the female leads from Wicked, that's a group comfortable in taking some chances with gender-specific lyrics (specifically, Like a Prayer...oh boy, there's something uniquely surreal about fifteen-odd college guys singing a song with those lyrics) and a group that's not afraid of looking a little silly. For the most part, though, the female-driven songs take on some nice new dimensions with a male vocalist behind the wheel; Set Fire to the Rain makes the shift very nicely, as do parts of Defying Gravity.

The general tone of the soloists match the group sound pretty well - bright, earnest and dedicated to the material. Sometimes, though, the group's chirpy earnestness gets in the way — I felt a little embarrassed during the group vocal take on the iconic guitar solo in 25 or 6 to 4. Usually, though, the group is camp when camp is called for, serious when solemnity is needed and fun-loving the rest of the time.

Tongue Tied is only average musically, but the album is a nice reminder of what brought so many of us into a cappella in the first place: the joy of singing with friends. If you're looking for a pick-me-up, I can say that Tongue Tied will probably do the trick.

Find the Stereotypes on iTunes, or contact bm@thestereotypes.org to order a physical copy.