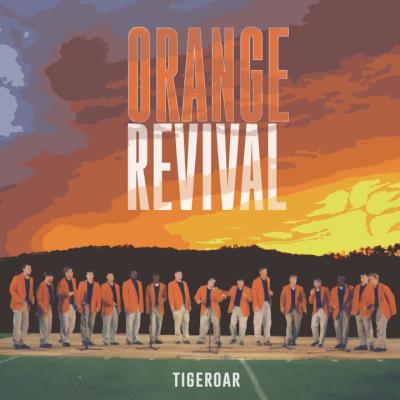 The track list for Orange Revival terrifies me. In an album so heavily influenced by Top 40 music, there's a lingering risk for the performance to be driven by an audience and not the song. Imagine the group performing to a crowd, drawing an energy that helps the music grow. There is engagement in every song, and arrangements are meant to be simpler and mirror the original recording to help audience familiarity. However, there's a problem with this approach: what happens when the crowd goes away? This is the main issue that I've found with this album. While Orange Revival has a track list that would be a lot of fun to perform for live audiences, the overall lack of innovation and energy in the studio leaves a lot to be desired.

Energy in the studio is incredibly important. I have a picture of my old college group in the studio where one of the basses is posing like a diva while singing into the microphone. I'm sure it was a staged, but it shows how energy can and should be utilized in the studio. There should be no difference between the energy and engagement on stage and in the recording booth. However, with tracks like Mirrors and Not Over You, it sounds like the group is bored with the songs. There's no accenting in the background or changes in dynamics. It feels like a string of block chords in repeating patterns. The lack of energy also results in muddled rhythmic patterns. This permeates to solos as well. Make no mistake, Parker Brookie and Allen Shuford have fantastic voices. However, the soloist and the backgrounds should be complementing each other, creating an entire wall of sound and energy. Instead, it feels like soloists are trying to singlehandedly carry a group, and that doesn't work well for anyone.

Arrangements are also an important factor here. Overall, there's very little innovation. A large number of sections across the albums are block chords moving in the same pattern. This makes for very uninteresting moments. Some of the blame can always fall on the original song, but the responsibility falls on the arranger to find ways to keep the number interesting. Eye of the Tiger does a fantastic job of staying interesting with its "dum-di-di-dum-di-di" pattern running underneath colorful chords and a rocking vocal percussion track. But more than just patterns, it's finding little ways to change the backgrounds. Adding dynamics makes for a world of difference. It doesn't need to be a large variation, just enough to keep things constantly changing. When variation doesn't show up, such as in Valerie, the song starts to deteriorate very quickly.

Overall, Orange Revival can be considered a yearbook album with just a few larger flaws permeating across the board. All of the songs on this album are the type of song that could be performed at a campus venue and the audience would love it. The music is easily digestible and meant for fun. However, that fun does not translate well into the studio. It falls on the men of Tigeroar to take their energy from the stage and channel it another way. As they've proven on some tracks on this album, they can do it. However, until they can figure out how to do it consistently, compelling studio recordings will be a defining struggle for them.

The album is packed with a collection of songs that aren't particularly in the same era. Hey Ya kicks it off with some interesting rhythmic syllables that I surprisingly enjoyed. But the singing is not quite there to really impress. At first, I was excited to listen to Michael Jackson Medley as it started to sound promising, but then the Man in the Mirror section sounded anticlimactic — it sounds like another intro instead of giving us listeners a hair-raising modulation to end the medley. The release goes on with the rest of the songs that dwell in the safe zone of repetition and average singing (Story of My Life, Valerie, Mirrors, Some Nights, Thinking Out Loud, and so on). I am also opposed to tragically transposing Eye of the Tiger as it loses the intended effect of bringing out a battle-ready performance. As a result, it sounds too safe, and some listeners will have a problem accepting the chosen key of this version.

However, as an exception, Some Nights is quite a bit better that versions I've heard so far. I'll also give kudos to Jordan Taylor's take on Ed Sheeran's Thinking Out Loud. It's difficult to really stand out and make an outstanding version of a popular song, but Taylor succeeds. Funk Medley is also one of the arrangements that make it to my favorites list — it's simple but the syllable choices are cute. Allen Shuford's solo performance of Not Over You also deserves a round of applause. And lastly, the choral approach for You & I is the best decision to perform this cover — it starts off sounding mellow and gives way to an arced ending.

There seems to be a grit and energy that is lacking both in the soloists' parts and the backing harmonies of Orange Revival. There is nothing special about the arrangements — no storytelling, mainly just singing in tune and not really making use of artistic freedom as an element to produce a bum-kicking album. If this was produced ten years ago, it would have sounded amazing. But today, we have to hear great arrangements of really well-performed covers.

Clemson University is the home of the NCAA 2016 Football National Champions. It's also home to the one and only Tigeroar, a cheeky all-male a cappella group looking to show that sports aren't the only thing that Clemson is good for. Although the group may be a legend on campus, Tigeroar's latest project Orange Revival left me unenthused and yearning for the return of football.

Orange Revival is a highly repetitive album with a minimal sense of intensity or innovation. The group may be a hoot live with shenanigans, bright orange blazers, and ladies swooning (as they seem to in a small feature within Hey Ya), but nearly every track on this new album leaves me feeling like this is an uninspired take during a weekend rehearsal. The energy Tigeroar shows on the majority of the tracks is one of a group who has sung these arrangements hundreds of times and is ready for these pieces to be retired. Where is the passion from soloists? Where are the crisp attacks and dynamic swells of background vocals? Most of all, where is the creativity or even sections within arrangements that keep inspiring these singers to sing these tracks like it's their first official performance with them?

While there are moments of passion shown from Jordan Taylor on his featured track Thinking Out Loud, almost every other soloist never fully claims his feature or shows any sense of inflection on what the words he is singing mean. Another rare bright moment can be heard in the opening of Eye of the Tiger where energy is present right away, there are flashes of unique innovation, and soloist Phil Amarendran shows a little flare at times. Lastly, there is a glimpse of positivity toward the ending of You & I with its variance away from the original, showing the true potential of what could be with this group. I hope that more of this creativity will be seen on future albums.

The one major factor on Orange Revival that really stresses its flaws and contributes to the lack of energy is the continued repetition. Each and every song on this album has basically been heard in its entirety after the opening verse and chorus. These overly repetitive arrangements tie back to many of the other issues addressed above and make it hard for the listener to enjoy the sound that isn't paired with the live performance dancing, shenanigans, and everything else that Tigeroar brings to audiences. Your album should capture the concepts and energy of your group that ticket holders come to see through your sound, while also highlighting your strengths, but with this release Tigeroar really fell flat. For the avid a cappella listener, I would pass on Orange Revival this time around and stick to rooting in football.

Orange Revival is also available on Spotify and Google Play.