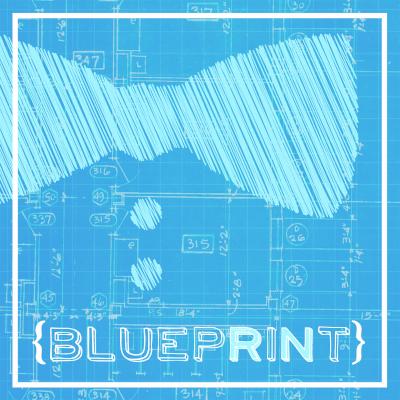 The Ransom Notes bring a consistently sultry vibe to their vocal performances on Blueprint, but inconsistent arranging efforts really drag down this release.

I struggled with the arrangement choices on the Ransom Note's previous RARB submission Black and Blue, calling some of the theatrical-leaning choices "corny". I feel the same about pieces like Cake by the Ocean, which radically switches halfway through from a straightforward interpretation to a crackling-radio-50s-esque swing feel. It would be an acceptable dose of cute if we didn't also get an outburst of "Hammer Time!" before dropping in Bootylicious lines soon after. It's an arranger's job to keep things varied, but this feels like a submission from a Junior Varsity a cappella group, which I can assure you the seasoned Ransom Notes are not. The following track, Doin' It Right, struggles to offer a creative, challenging, or elegant interpretation, too. It starts out with such promise, but as the tempo quickens, the prolonged and repeated spoken-word sections on block chords sound increasingly awkward. These two tracks, in particular, make Blueprint less notable.

The album opens on solid footing, however. Desperado features a duet with beautifully matching solo stylings; Saoirse Ryan and Sharbel Romanos were made to sing together and their song feels fresh. I also enjoy the unique lead on Windows, but the sterile backgrounds do little to engage the listener.

Blueprint's middle offerings include the boppy little ditty Ain't Got Far To Go, which is light and just alright (also not very challenging). Lighthouse is certainly more ear-catching: the very strong lead from Muriel Bernardi overflows with presence and command.

It's in the final stretch of Blueprint that we're delivered the full capabilities of the Ransom Notes in Tempest. This track is quite aurally compelling with its effective staggered entrances and echoing lines, and a meaty composition-driven chart underneath a restrained but growing lead. This is the only selection on Blueprint I come back to, because of the particular way it envelopes the listener. Lastly, we end on Lil Darlin, which is a strong selection to close with, but the lead sounds a bit rocky here and there.

I like that the Ransom Notes aren't submitting the same track list as many of their peers, and I like the confidence they sing with. But the group's arrangements and interpretations need more sophistication to have enduring value.

The Ransom Notes, a mixed group from the University of Chicago, has had quite an about-face in its recordings over the last decade. This is a group that didn't even break the halfway mark on RARB's 5-point scale prior to 2015, but those days of mediocre recordings and half-engaged performances seem to be squarely in the group's rearview mirror.

Its new album Blueprint nicely follows the work of the group's last EP, Black and Blue. The group again chooses bright, glossy pop songs, and these performances are solidly engaging. Corinne DiFrancesco and Corson Barnard's arrangement of Cake by the Ocean is great; the little snippets mixed in add a bit of spice to an overplayed song, and Maggie Bader does a solid job on the lead. DiFrancesco strikes gold again with the mash-up arrangement of Doin' It Right / On My Mind, which melds those songs together so seamlessly I almost(!) forgot that they were two different songs, even though I've heard the originals separately numerous times.

The album ends strongly as well: the swirling Tempest starts out sounding like a dust storm and maintains a haunting patina throughout, while Corson Barnard's take on Lil Darlin is the most memorable lead on Blueprint, a solid anchor for this album.

The rest of Blueprint is "just" good instead of awesome. Desperado is sultry and smoldering but isn't the most attention-grabbing start to the album, while several of the other tracks — Windows and Ain't Got Far To Go, for example — are exceptionally well-performed but not especially memorable. That's still quite good, though: Blueprint is a solidly enjoyable listen from top to bottom (and several times in a row), and it's awesome to hear how far the Ransom Notes have come in the past few years.

Blueprint, by mixed collegiate group the Ransom Notes, is energetic and engaging right from the start. It continuously shows off fantastic voices, intricate arrangements, and excellent production. The room for growth in the album lies not in the tools used, but how they are honed and realized further for the future.

It's hard for me to fault the core sound or individual voices on this release. There is a careful, constant intensity, even on quieter dynamics. Blend is rich and smooth almost from start to finish, and soloists never shy away from the mic. In most arrangements, there is a consistent wall of sound that keeps a listener attentive even when fewer voices are singing. Excellent production not only accents that feature, but cleverly hides when there's a bit more unintended empty space.

There are two areas for future improvement that I can see from this work. First, Blueprint almost entirely fits the mold of what I like to call "minor, epic, whole note dissonance", a style of a cappella most commonly associated with the Nor'easters. It is pretty much exactly as described: songs tend to land in minor keys, use similar rhythmic textures, arranged with lots of pad notes in the background, and use a similar set of dissonant harmonies (lots of minor 7ths and add9s). This can be used to great effect in moderation, but when used heavily throughout an album, several problems arise. Windows becomes over-embellished in the solo and overpowering in the arrangement, while the lyrics and harmonies of the original call for a much softer and vulnerable touch. Lighthouse begins to actually sound emptier and more scattered than the original song when pushed into this style. Desperado and Lil Darlin are both very solid songs but begin to blend too much into the rest of the album.

Second, there are times when the Ransom Notes try to inject too many good ideas into one place, which inhibits coherence within a song. Soloists are all strong, as I mentioned, but some tend to over-embellish their lines. It makes me worry that they're trying too hard when they clearly don't need to. Arrangements will sometimes aim for inventiveness but overshoot a bit too much. The song most hurt by this is Cake by the Ocean, a piece that I consider excellently done in almost every regard. The only thing holding it back is that it throws in many ideas in short spans of time, instead of simply rolling with one or two.

The Ransom Notes hit their stride when they alleviate either of these issues, or better yet both. Doin' It Right / On My Mind is a fantastic mashup arranged by Corinne DiFrancesco that continuously keeps things fresh, sticks to a central theme, and just borders on going too far. Ain't Got Far To Go has a bit of empty space here and there, but I really appreciate the mood shift in the song against the rest of the album. It's just plain fun, and the arranger De'Andre Warren and soloist Simona Martin embrace that all the way through. Tempest combines some impeccable production with the richness and vulnerability of soloist Omar Agha. The song does exactly what it sets out to do, and shows restraint and patience by not taking it any further.

On a completely different note, this is a friendly reminder to a cappella groups to be sure to credit original songwriters in your liner notes. Crediting original performers is welcome, but not nearly as important.

The Ransom Notes demonstrate a ridiculously strong foundation and potential in Blueprint. I hope that in the future the group will hone its tools and expand its ambition because as is, these singers have a lot to offer to the collegiate a cappella scene. By all means, Blueprint at its high points is superb. Now those high points need to become a bit more frequent.