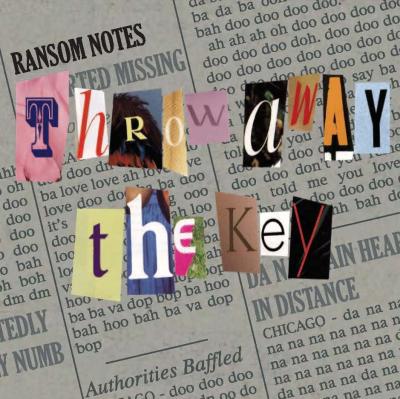 The Ransom Notes' problems aren't unusual. Sometimes the leads don't quite do justice to the originals. Sometimes the engineering sounds slightly wonky. Sometimes the pitch is a little off. Frequently the rhythm fails to land the groove. These issues combine to keep scores in the average range. But the Ransom Notes' creative approach to arranging and performance makes Throw Away The Key more listenable than one might expect at first blush.

Manoah Finston sounds right on Bizarre Love Triangle. Nick Einhorn sounds right on Mirror, Mirror. They capture the reckless energies of the original without cheapening to the level of imitation. Creativity is the true strength of the Ransom Notes. With few exceptions, Throw Away The Key's arrangements, leads and musicality all lean towards reinvention over regurgitation even if this creativity of approach does not always translate to final musical success.

Take Skater Boy. It's been re-imagined in minor and diminished colors, as a dark, jazz influenced torch song. If you can imagine it, it's oddly reminiscent of Kurt Weill. It shines with creativity, but is it enjoyable? That's a matter of taste. I found the arrangement intellectually interesting but a little grating and unsettling, harmonically. But you have to respect that kind of musical bravery. There aren't enough groups diving off the deep end.

Of course there are also limitations on this brand of reinvention. It's not the original, but in many cases, Skater Boy notwithstanding, it's not a wild twist either. Take "Walk Away". The arrangement is rhythmically imitative, harmonically influenced, but with some nice departures. The overall texture is appropriate and full. The "nah"-we're-done-now ending is just a crash and burn though.

The point is that though Throw Away The Key remains far from a perfect CD, it shows signs of creativity. I expect many collegiate arrangers could learn a thing or two about taking risks from the Ransom Notes and with some fixes for their issues and a willingness to continue experimenting, I'd hope for a strong follow up release from this group.

Really? A group has really decided to call their latest album in some sort of post-post-modernist, self-referential case of irony Throw Away The Key. For REAL! Well, nothing like a self-fulfilling prophecy for the Ransom Notes. Their new album Throw Away The Key is occasionally marred by distinct lack of pitch and key centering.

Soloists sing entire sections and lines trying to climb their way up to the key that the background set on Distortions and Since U Been Gone. Internal tuning fails inconsistently from measure to measure. Sometimes the chords will lock and it would give this reviewer a false sense of hope that the singers were going to be able to salvage another mediocre song. But alas, except for God Only Knows and Bed of Lies that isn't the case. Even my favorite track on the album Skater Boy which, it should be noted, is incorrectly spelled here — it should be "Sk8ter Boi" — has a couple of middle passages that screech like a skateboard rolling down a hill with its wheels falling off.

Throw Away The Key is a natural-sounding album. There is not a lot of studio-wizardry being bandied about here. I get the feeling that the group went into the studio and laid down a few live takes and took the best one they were able to deliver and placed it on the album. I remember sitting in the studio with my group and doing just that back in 1991. Otherwise, how can they explain the "woah-woah" girl coming in so much under the pitch on the otherwise palatable opening track Comfortably Numb? It's unfortunate that the Ransom Notes couldn't have gone a more produced route, there are some nice raw tracks, which could have been turned into pretty awesome songs with the right help.

The news isn't completely bad for the group, which would do well to continue on the creative path set by arranger Nick Einhorn when he re-imaged Avril Lavigne's punk-pop lament Skater Boy into what I'm calling a jazz-swing dirge. That took some creativity and daring. Kudos! Plus Shreyas Bhat '07 and Francis Kim '08 are the best singers in the group and are a joy to listen to. So let me hear much more like this in the future.

Throw Away The Key is definitely a family and friends album, but with some attention to the basic fundamentals of co-ed a cappella singing, the next album hopefully won't be so disposable.

I love it when college groups use unintentionally appropriate phrases for the titles of their albums. Throw Away The Key (put together on the cover in a freaky I-kidnapped-your-child-and-here's-the-ransom-note kind of way) is exactly what I want to do after listening to the third album from the University of Chicago's Ransom Notes — put the album in a far away locker, lock it tightly, and throw away the key.

I don't mean to be rude, but this album is that bad. The tuning is awful, the arrangements are all over the place, and most of the soloists don't have the pipes or the heft to carry the solos they are attempting to carry. And seeing as how this is the group's third album and it is 2006, these are issues that should be heard and remedied before going off to the duplicator.

I actually feel kind of bad for some of these singers. The poor girl who sings the lead on Since U Been Gone doesn't have the strength and range to tackle Kelly Clarkson, and she knows it. She does just fine through the verses, but she doesn't even attempt to nail the chorus; she simply jumps to head voice and just rides it through. The chorus of Since U Been Gone should be balls-out major belting (not to mention, why aren't there any harmonies/backup singers to the lead in the chorus?).

The Ransom Notes don't help themselves with the order of the songs on Throw Away The Key. Arguably the best four songs are the last four. They are definitely the four songs with the best tuning. Instead, the album opens with a slow and eerie Comfortably Numb, which is exactly how I felt listening to it, followed up by the two very out-of-tune God Only Knows and Bizarre Love Triangle. Things pick up a little with the racing energy of I Will Follow, and the previously aforementioned final four songs are listenable. But by this time on the album it is too late, as the average listener has tuned out. The album should have opened with I Will Follow, then the creative, if not odd, jazzy version of Skater Boy, Hey Jah!, Bed of Lies, and Distortions. Put the rest of the tracks in any order and finish up with Comfortably Numb, and this would have been a much different album.

Really, the major issue with the Ransom Notes and Throw Away The Key is the talent level of the singers. There are just too many tuning issues and weak soloists. But I can't honestly think that they are as bad as it seems on this album. Of course, it doesn't help that the recording engineer wasn't attuned to these problems and didn't help them fix them in the recording sessions or the mixing sessions. Perhaps just more rehearsal with the songs and the shift to a new studio would help the Ransom Notes improve.

To order this or other Ransom Notes albums visit the group's website.