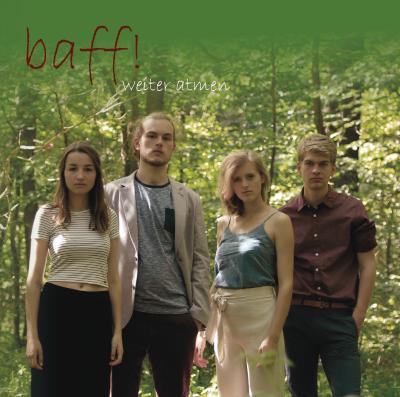 It's always a good sign when an album leaves you humming the last tune well after it ends. So it is that baff! goes out strong, after a dozen talented tracks with varying levels of curb appeal. Generally speaking, I find the female soloists wonderful and the male soloists less consistently to my taste. My personal attraction to the songs varies accordingly.

For just four singers, baff! packs quite a punch. All of the songs are fulsomely recorded and laid out with a generous wall of sound. This is not to say the record all sounds the same — on the contrary, I like how the group pulls back to a cleaner choral or jazz sound for Dreh' Dich and Veronika. The former is an original that sounds a bit like the intro to Kiss from a Rose crossed with a Tchaikovsky hook. It's quite charming. The latter is a Comedian Harmonists hit, brought forward from the Steamboat Willie era to something more like the Swingles. It is an astute choice and shows this group's range. The other cover, Adele's Skyfall, is fully up to date. The whole release benefits from Bill Hare mastering and a fair amount of skilled editing, which lets this recording fit right in with most of your faves.

Weiter atmen and Sun lu Gajevo are a cut above anything else on the album. The title track opens with a crystalline soprano, segues into a rock smashup that wouldn't be out of place back in Skyfall, then moves back to percussion-free power chords. It's a standout. The only way to follow it up is to change mood completely, as achieved by the closing number. As far as I can tell (from a quick Google search and a look at the group's website), Sun lu Gajevo doesn't mean anything in particular, but it sure is nice to listen to. And the tune is beautiful, recorded in a setting with shades of the soundtrack from The Power of One.

Most of the album is original music, and I really enjoy the diverse styles on display. Of the male-led tracks, Still and Um alles in der Welt are probably my favorites, musically. I'm not really in the mood for a modern-events kind of song, so Um alles in der Welt doesn't really connect with me, but it's well-composed and nicely sung.

The baff! singers seem to make time for this group alongside many other endeavors, and their musical breadth serves them extremely well. For anyone, let alone four moonlighting music students, Weiter atmen is a tremendous achievement. If you buy it, I think you'll like it.

baff! is a four-person mixed a cappella group from Germany, with two female and two male singers. Weiter atmen ("Keep Breathing") is the group's second album. The singers are quite young — from the cover photo I'd guess early twenties and their website refers to them as "die vier Jugenlichen" (the four youngsters).

The album's vocal quality is comparable to a typical collegiate album in the U.S. What is not similar to collegiate albums is that all but two of the songs (Skyfall and Veronika) are originals written by group members, so kudos to them for that! Jonathan Mummert does the heavy lifting, with all songs being written or arranged in whole or in part by him. There are some clever touches, for example Dreh' Dich ("Spin Around") is a song about being battered by competing demands done in the style of a folk song, or Liebe Liebe ("Dear Love"), a plaintive letter addressed to the concept of love itself ("People talk a lot about you, but they don't understand you...") that uses the wordplay between dear and love, both of which are the German word "liebe" in this context. All the songs are sung in German except Skyfall (in English) and Sun lu Gajevo (in a made-up fantasy language).

I like the songs, and think it's fun to hear so many originals on one album, but with just four singers the songs seem a bit empty vocally at times. The typical song has a soloist, bass, and two background parts. The soloist is sometimes female, sometimes male. Some of these songs have vocal percussion, but not typically at the expense of one of the vocal parts. I am not sure how they would do this in a live performance.

The singers themselves are quite good, particularly the soprano, whose voice I really like in Liebe Liebe and the title track Weiter atmen. She is light and airy, but still with some substance. However, what I would describe as subpar sound production leaves the listener without a rich, full sound to grab onto. It's a distant, non-intimate sound, often as if I were listening to the group in the next room through a partially opened door. And while this might be the first time I've ever complained about too much dynamic range, I have found myself needing to constantly turn my speakers up and down to adjust volume while listening to the album because some of the loud sections are harsh and some of the quiet sections are too quiet. With a little improvement in the production area, I suspect I would have rated pretty much all of the songs a point higher than they currently are. It affected my repeat listenability rating as well.

To bring this review to a close, I cannot give Weiter atmen an extremely high recommendation because of these flaws, but it is certainly enjoyable to listen to, and as the group continues to grow and improve it could certainly become a force to be reckoned with.

German a cappella quartet baff! has been around since 2013, and Weiter atmen is the group's second album. For the most part, this is a collection of original compositions sung in German; I didn't want to read the English lyric translations because the songs are so beautiful as presented, and the meaning of the lyrics just seemed insignificant.

The album kicks off with the beautifully lilting Frei, and I was hooked. These singers blend wonderfully; listeners will be aware that there are only four voices, but these performances never sound thin. There's a little bit of percussion here and there that helps the songs move as well; most notably, towards the end of Liebe Liebe, right when the song starts to drag a little bit, the vp comes in and gives a fresh burst of energy. On Wenn sie lacht, the group uses percussion on and off throughout the whole track to great effect; it's subtle and doesn't steal the show, but it anchors the song and its transitions.

Rastlosigkeit is another standout track; it's catchy in its own way and the arrangement builds and grows and is just lovely to listen to. Group members Jonathan Mummert and Jörgen Roggenkamp are responsible for this arrangement (Roggenkamp wrote the lyrics and music), and it's worth noting that their names are all over this album, both as songwriters and as arrangers, and that consistency certainly adds to Weiter atmen's overall listenability.

The one oddball song choice is a cover of Adele's Skyfall; the group performs it well, but it's a bit disruptive to suddenly hear English lyrics and a cover in a collection of originals. This one should've been saved for an album of English-language covers or released as a standalone single, as it just doesn't flow here. (It should be noted that Skyfall is not the only cover on Weiter atmen; Veronika is a cover of a song from the '20s, and it definitely has a retro jazzy flair that sounds different from the rest of baff!'s originals. But since its lyrics are in German, it flows better in the context of Weiter atmen as a whole than Skyfall does).

Weiter atmen is a beautiful collection of original songs (with a few covers), and the singers in baff! sound lovely together. With such a strong foundation and solid talent, the group is sure to find success wherever their path takes them from here, whether that's more German originals or a deeper dive into English-language covers.