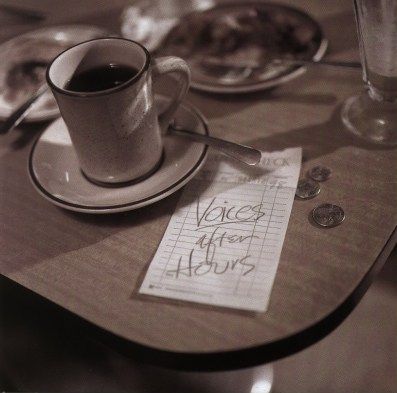 It's just so hard to believe that After Hours is a high school group. They put many collegiate groups to shame. After Hours has a live energy feel with studio accuracy. No easy task. Kimberly Kredich's superb direction elevates these talented high school singers far above their peers. It's a real joy to hear phrasing and dynamics in contemporary rock/pop music without them sounding stilted or artificial. Kredich has the admirable ability to put her New England Conservatory of Music Masters in conducting not only to musical use, but to tasteful use. Kudos to Kredich for refusing to sacrifice "feel".

The only giveaway that this a HS ensemble is the men's voices. There's just no way way to get around the fact that many of these singers have only had their present ranges for a year or two. The male voice takes a while to settle. The result is a bit less vocal control. But while several tracks are weighted down by this, the strength of the women's performances is usually strong enough to tilt the balance back. The basses are working hard to project in most songs. Yet the overall sound could use more thump. Softer singing, closer micing and some EQ or BigBottomTM could turn that around for the next album.

The vocal percussion is deserving of real praise. It's constantly musical and surprisingly accurate for a high school group. While the intonation of chords has its ups and downs, the VP is on-target from start to finish.

Whatever college groups are "fed" by the Moses Brown Voices will be quite lucky. Few HS singers get such fine training. As for the potential CD purchaser, it's a tough call. I enjoyed the album, but it has its limitations. If you are interested in what the new standard is for HS groups, you just might want to make After Hours a part of your collection.

Okay, I have to say, that despite the rating I gave to this album, I am very impressed by the Moses Brown School's Voices. Under the leadership of Kim Kredich (formerly of Duke's Out of the Blue and Stanford's Mixed Company), these high school students have engineered an impressive album of college-level music. On top of that, After Hours was recorded live to DAT. There are several tracks that I found particularly intriguing, including a rendition of U2's All I Want Is You, and a fun performance of Rick James' Super Freak intertwined with MC Hammer's rap-pop classic, U Can't Touch This.

That said, there is nothing particularly innovative or spectacular about After Hours. It doesn't make me want to listen to it again and again. The track list is somewhat eclectic, giving homage to such disparate performances as: Ace of Base's The Sign, Ani DiFranco's Both Hands, James Taylor's That Lonesome Road, lounge classic I Left My Heart (?) in San Francisco, and Rick James' Super Freak. While the lack of cohesiveness doesn't bother me, per say, it does lead one to wonder if Voices is either still searching for an "identity", or if they find themselves having to cater to a large variety of tastes. In addition, while I'm impressed by this group's ability to handle complex arrangements in a "one-take" type of recording, I do wish that they had taken the time (and money...I know it's not cheap to record albums) to work on their solos more.

Many of the songs featured leads faulted by tuning issues that could have been easily fixed by overdubs in the studio. For example, In the House of Stone and Light is too low for Jung Kim, who has a nice voice, but just can't seem to hit those low notes solidly. The out-of-place I Left My Heart (?) in San Francisco, the soloist ends the song with an uncomfortably flat set of notes. I Don't Mind is punctuated by flat notes by the lead. If only Voices could have gone back in to the studio for a little while longer....

In any case, Voices does have one thing going for them: they have captured the feel of singing contemporary a cappella — they vocalize with feeling and sincerity. Too many high school a cappella groups remain trapped in their notions of singing as a "choral" and "formal" form of expression. Voices performs their pieces with believability, and I encourage them to continue with their good work.

Voices is a high school a cappella group from Providence, RI. While this album is impressive for their age (in fact it is better than some college albums that I've heard), it shows their age and inexperience with this music form.

This album is filled with obvious pitch problems, especially with the high parts. At least once a song, something just doesn't sound right. Most chords are tuned as they are held, but when they change, the problem returns. Some of this is also due to the fact that everyone is not saying the same vowels, even within the same part. A simple shift from closed to open makes a big difference. This is something that singers need to learn, and these kids are not at that level yet.

Another aspect that bothered me was that I could rarely understand the soloists. Their voices sounded muddy and all the word ran together. It was like Nirvana sings a cappella. This could have been more of a production issue than a performance issue, but either way, it was an issue.

I also felt like the performers weren't quite connected with the arrangements. Many of the songs that were chosen seem to be closer to something that I might be able to relate to, but not them. Vanilla Ice (in Queen's Under Pressure), MC Hammer (in Rick Jame's Super Freak), and Ace of Base were all big when I was in middle school, which means that these kids were in elementary school. While they bring back fond memories of awkward 7th grade dances for me, I can't see how they would have much meaning to them. In fact, most of the arrangements are taken from, or remarkably similar to, collegiate versions. I would have liked to see more current songs picked by the students themselves.

On a positive note, I really like the idea of high school a cappella, and this group is great example of the good it can do. While this album is probably reserved for friends and family of the group, these kids are getting a good start before they get to college. Look out for them in the future.

Voices, hailing from Moses Brown High School in Providence, RI, was founded back in 1994, which makes them as old as a good portion of the college groups out there.

The experience shows. Voices avoids the choralesque intonations of a lot of high school choirs (and their classically trained teachers) that attempt the kind of contemporary material that makes up much of the album. Instead they dive headlong into arrangements by such groups as Stanford Mixed Company, The Beelzebubs, and The Brown Derbies, as well as some excellent arrangements by their founder and director (and college a cappella alumnus) Kim Kredich. After Hours includes two admirable student co-arrangements (Seth Weitberg on X-Ray Eyes and Jung Kim on I Don't Want to Wait, both with their director).

Some outstanding numbers are In the House of Stone and Light, the best track by far, featuring a very confident and sensitive Jung Kim (and great dynamics by the group), and Both Hands, sung by Sophie Califano. The whole album displays some unique and welcome repertoire choices — nice to see Guster, the Tragically Hip, and Ani DeFranco among the more standard George Michael / U2 / Indigo Girls songs.

Soloists are quite remarkable for this age level, but group tuning problems are evident on almost every track. After Hours is a live studio album, so I'm tempted to give the group the benefit of the doubt — after all, there are few student a cappella groups that can record a 16-track live album without a few wrong notes.

I would encourage the members of Voices to try their hands at arranging (it's a lot easier than you think, I promise), as it seems they've mastered everything else.

This album is a definite recommendation for anyone working with contemporary a cappella at the high school level (as I have), either as a teacher or a volunteer (hey all you college a cappella alums out there, how about calling Urban Harmony or your local high school and getting involved?). It challenges the students, revealing their limitations, but mostly their abilities. Congratulations to Voices. I look forward to their next album.

Why wasn't there a group like Voices at my high school? Maybe I would have stuck around to graduate.

Directed by an alum of two well-known college groups and featuring arrangements borrowed from several more, After Hours is JV college a cappella. The album features some of that genre's strengths — fun pop repertoire, good spirit, energetic VP — but the group's inexperience shows.

Voices is doing some things well. Some of these arrangements are ambitious and interesting. I enjoyed the excellent, energetic VP from Seth Weitberg. The group sings with plenty of spirit, and for the most part strong direction from Kim Kredich keeps the complex arrangements together rhythmically.

On the other hand, many of the soloists are not up to the challenge of this repertoire, and there isn't much production. All the borrowed arrangements sound much better done by the original groups, so it's difficult to recommend that listeners purchase these versions. More importantly, from song one, beat one, until the last chord on the CD, this group just can't tune. The tuning ranges from iffy to unlistenable, but no song rises above OK, and the problems will be readily apparent even to non-musicians. Some tracks, like I Don't Want to Wait, are so sour that they should have been left off the disc if there was no time for another take.

Although I can't recommend After Hours as a work of art, I applaud Voices for their admirable effort. Groups like Voices are a priceless training ground for future college singers. I would never have expected that a high school group could put a CD together with only two hours of rehearsal time a week, and such a small pool of auditionees. They're tackling complex arrangements, challenging themselves, and judging from the photos in the liner notes, having a blast. I hope they realize how lucky they are to have an opportunity like this during high school. It almost makes up for having to take gym.